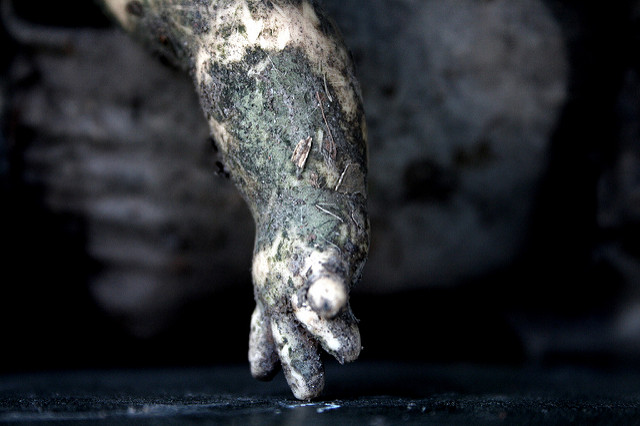 I sit alone at a cocktail party, drinking my gin and tonic and staring into the middle distance. In my peripheral vision, I see Mary Gaitskill break away from a small group and float my way like an apparition. She settles into the chair next to me, which is plush with winglike arms and red as a power lipstick.

“These remind me of those butterfly chairs from the 60s,” I say.

Her limbs are feline, her skin blindingly white. My eyes trace the blue of her carotid that runs like an arterial highway down her neck. It pulses gently below the skin near her clavicle. The elbow of her right arm rests on her crossed knee, and her left hand moves up to her face, cradling her delicate chin in her palm. I scan her face, so close to mine.

“I want to tell you the story of a doll I had as a child,” she says.

Most of my dolls are creepy. Some damaged. Maybe this is the point.

I felt like a little girl whose literary godmother had come to sit on the bed. In college, Mary had ensorcelled me with her short story collection Bad Behavior, and her novel, Two Girls Fat and Thin, just about saved my early adult life. Now, Mary Gaitskill wanted to tell me a bedtime story. I leaned in and my eyes widened. I’m pretty sure my mouth hung open.


As a young girl, Mary was given a doll named Linda, but she changed its name to Beautiful Sue after she hacked the doll’s hair off to the scalp and stripped it naked. She played with the doll for a while, she said, then grew bored and discarded it.

Years later, she found Beautiful Sue while cleaning out her sister’s house. Her sister was a hoarder who lived among buried things. Mary unearthed Beautiful Sue and took the doll home with the intent of throwing it away. Instead, she dragged the doll from place to place to place, hiding it in corners, storing it in boxes, or shoving it in the back of a closet. The doll kept materializing. She couldn’t seem to bring herself to get rid of it, and yet she wanted to be rid of it. Finally, a friend of Mary’s made Beautiful Sue some new clothes, and a leopard print hat to cover its balding head. Now that she had proper funeral clothes, the next step was clear: Mary found a cardboard box, dug a hole in the backyard of a house she’d rented, and interred Beautiful Sue.

“I feel like she wants me to come back for her,” says Mary. “But I can’t be sure I remember exactly where I’d buried her.”

“It’s interesting what we bury,” I say.

I may or may not have said something about dolls as fetish, and how I use dolls in my visual art to play with the thorny ways women are objectified, or about the heartbreak of never being able to escape the clutch of my childhood. I don’t remember the next part of the conversation, frankly. I just remember being lost in the clear blue of Mary’s eyes, and wondering what she was thinking. I don’t remember what led her to ask me the next question.

“What is breaking your heart these days?” Mary asks.

I want to conjure a good story to deflect the truth sitting fresh on the surface. But the voice in my head says: “You can’t lie to Mary Gaitskill. She’ll see right through your bullshit.”

Behind those cat-eye glasses, she even blinks with agency.

My glasses are cat-eyed too, and suddenly I imagine we are both felines, growling and rubbing our spines against different table legs. But more than that, I sense I am in the Lady Chapel of a medieval church. I light a candle to the Mary in front of me. My confession spills out.

“A poet is breaking my heart.”

I fucked him. I let him fuck me. It was glorious and sad and beautiful, the way he held me. I buried my head in his chest, opened my mouth wide to take him in. I commanded him to bury his cock, his fingers, and his tongue deep inside me, to pull my hair, to bite my lips. I begged him to fuck me deep and hard, and from behind. I invoked God. “Oh my God, yes,” I screamed over and over. I purred. I felt powerful, soft, and stuffed. I asked for it. I wanted him to.

He was the second man I’d slept with since ending my marriage of twenty-four years. Our sex was animalistic. We growled and screamed and writhed, licked and nipped, and devoured each other. We spent entire days in bed talking, kissing, reading, and sucking.

One morning, our bodies stacked like spoons, he told me he loved me. I wanted to say it back, but didn’t think he meant it the way I needed to hear it. “What does love mean to you,” I asked? His answer was dry as dirt.

I was greedy for him, but he was greedy for all women, so I broke it off. I wasn’t interested in being an object, a sex kitten, a toy. I wanted love and long-term. I felt powerful in my need. I left it clean.

Two weeks later, in a pique of exhausted melancholy, I called him for emotional support.

“He told me he tested positive for Herpes 2,” I say.

I want to bury him. I want to inter his smell, his taste, his moans, his love, and my heart, in a box six feet deep in the ground. Who is breaking my heart, indeed?

“I’m awaiting the results of a test I never imagined I’d have to take,” I say. “The educator at Planned Parenthood said ‘we don’t call if the test is negative.’”

I swear to myself that if this call never comes, I’ll never wait for another call from a man.

Mary absorbs my confession like a bruise. “You know,” she says, “Your fifties is a great time to be a woman: Fifty is the new Thirty.”

Then, she leans in further so no one at the party can hear.

“What’s the difference between love and herpes?” she asks, her eyes twinkling, the pink lids widening.

“What’s the difference?” I ask.

She levels her chin and looks straight into my eyes. Her lips curve into a smile; she shows teeth. I see a hint of fang.

“Herpes lasts forever,” she says, throwing her delicate arms above her head like two white flags of surrender.

I wince, but she has a benevolent gleam in her eye. It tells me I have no sin to confess—no bad behavior. I am holy and so is she. I giggle. Her joke feels merciless and merciful for its naked honesty. I lean forward and we cackle together.

Megan Culhane Galbraith is a writer and visual artist who runs The Dollhouse. Her work was listed as Notable in Best American Essays 2017 and nominated for a Pushcart Prize. Find her writing and art in Redivider, My Body, My Words, Longreads, Hotel Amerika, Catapult, The Coachella Review, Reservoir, PANK, and [b]OINK, among others. She’s an INFJ, and a Scorpio with Cancer rising. She’s also Associate Director of the Bennington Writing Seminars. Follow her on Twitter at @megangalbraith.