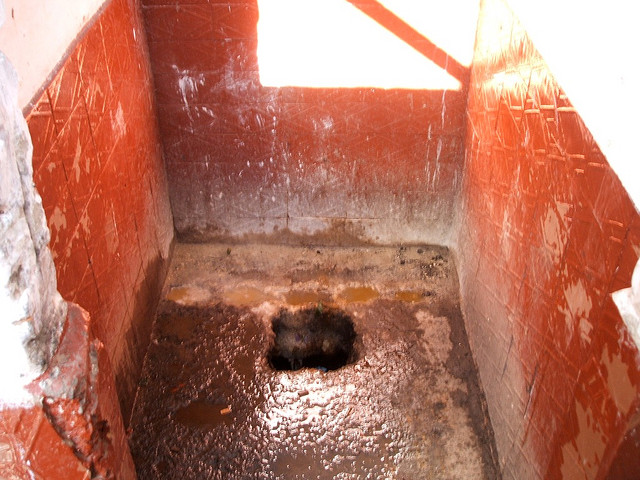 I lived abroad for a few years and have logged quite a bit of international travel. While going to school in Durham, England, it only took six months to decipher the Geordie accent. I celebrated my first NYE in Scotland…for seventy-two hours. I got felt up in Ireland… on a trampoline. I got my first yeast infection in Spain. I drank gorgeous Cotes du Rhone wine in France. In a rural part of Mexico, despite my DDD bosom, I was called, “sir” every day for three weeks.

Yet, nothing quite prepared me for Daegu, South Korea. I breezed through twenty-five-plus hours of travel; two countries, two flights, two shuttles, one bus, six trains, and one taxi ride. Unfortunately, upon arrival I had to pee. Katie, meet shit- and dirt-stained floor toilet. Shit- and dirt-stained floor toilet, meet a 5’3″ germaphobe. As you can imagine, our courtship was destined for greatness. Did I mention that I was menstruating at the time? After cursing out the toilet as if I was in an argument with a Bodega guy on any corner in NYC, and accusing it of criminal eagerness to transmit unheard of diseases through my vagina and anus—or both, I opted out of peeing on the dial-a-disease toilet wheel, and into peeing on myself a few hours later. What fun!

At the hotel, I was irked, exhausted and drenched from the waist down. The ground floor had a beautiful front desk with nobody manning it. Not because it was 3 A.M. No, no, no. Beyond overtired, my mother and I were close to killing ourselves—and each other. I snapped, “Who the fuck keeps a front desk on the third floor without a sign?!”

My mother looked at me and said, “Really, Katie?! We’re not here five minutes and you’re already cursing someone out?”

I said, “Ma, the front desk is on the third floor. There isn’t a sign, a valet, or a concierge to let guests know. What do you want from me?! I URINATED ON MYSELF! CUT ME SOME FUCKIN’ SLACK!” As expected, guilt and shame immediately consumed me, prompting an apology for my egregious outburst. Shortly thereafter, a front desk lady laughed at me and asked, “What is wrong with you?!” Did I just meet a Korean version of myself? A fast friendship was born and consummated with an outburst of mirth.

As soon as I entered my hotel room, after a thorough inspection (germaphobe—stay with me), I turned the air conditioner on high, opened every window, and had a fan brought up to my room. Simply put, I’m an oven on legs. I turned on the shower and ogled a toilet standing fourteen inches off the ground. She was clean, stupendous and all mine!