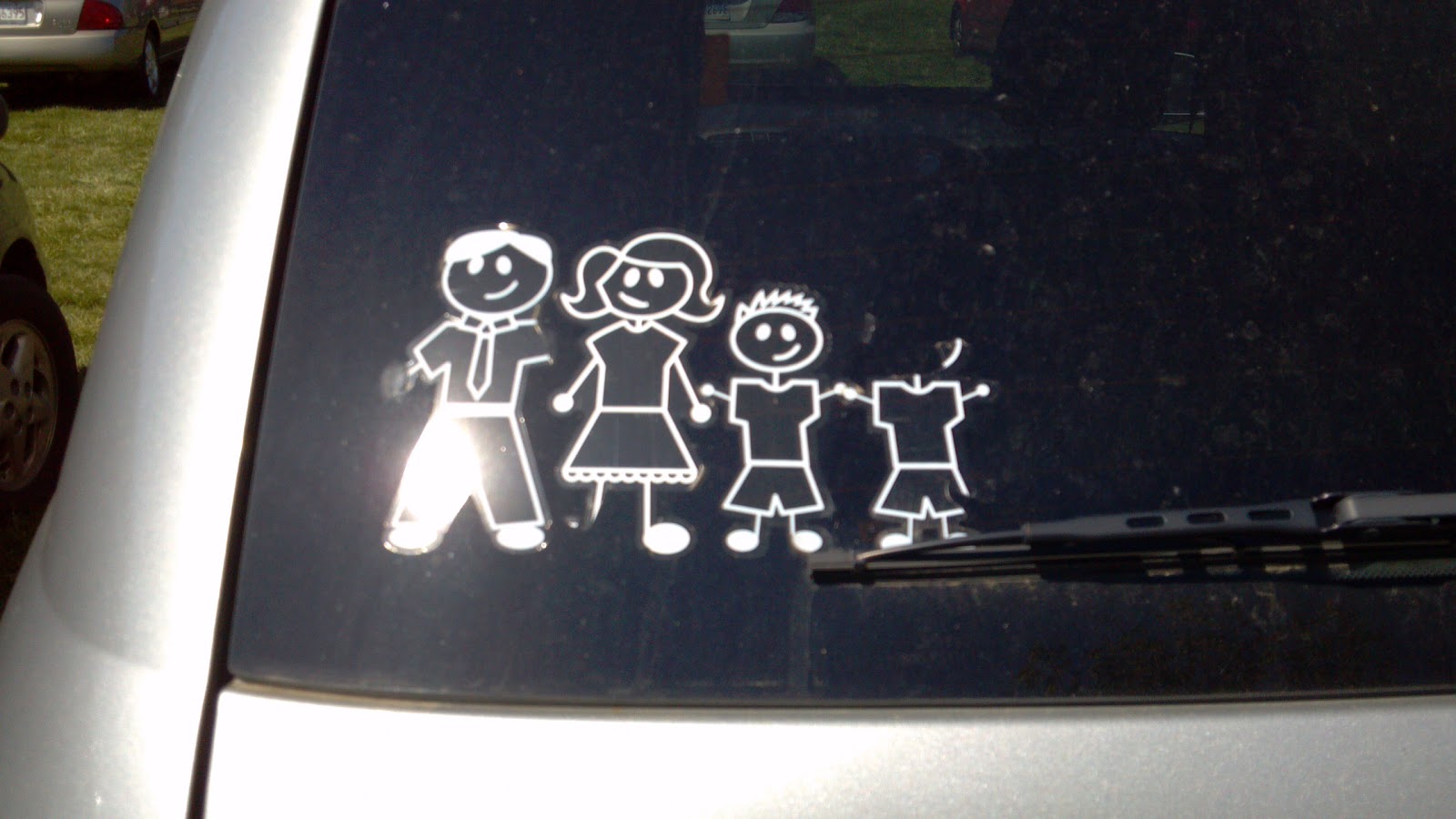 Escape from the Stick Figure Family

No one asked if I wanted to be part of this family. Somebody, Mr. or Mrs. Kincaid, peeled adhesive tape off my back and stuck me on the minivan’s rear window. Two pigtails and a skirt. Not a look I would choose. But I represented Rachel, the newborn. Rachel didn’t have hair then, but the Kincaids needed a girl next to Paul and Joseph. Later the twins completed the stick figure family.

“See that girl with the pigtails? That’s you.” Mrs. Kincaid would point to me as she bundled Rachel into the minivan. Toddler Rachel chortled, a sticky finger touching my hair, her own head a tangle of curls Mrs. Kincaid struggled to keep in place. “No ko bo mo.” As we drove, Rachel played with sounds, rhyming her way to new words. “Shimmy shammy whammy kazammy.”

By the time she outgrew her booster seat, Rachel lost interest in me. Often angry, she slammed the minivan’s sliding door.

“Now, sweetie.” Mrs. Kincaid laughed, wrestling the twins into their car seats. “A woman’s hair is her glory. Short hair is for boys and men.”

Rachel kicked the empty front passenger seat while Mrs. Kincaid sang “The Wheels on the Bus” with the twins until we reached the hair salon.

One day Rachel refused to unbuckle her seatbelt. “I’m not getting out until you cut my hair.”

Mrs. Kincaid chuckled. “Really? That’s news to me. Come down. We can’t be late.”

Rachel climbed out of her seat, trailing her family. In their hurry, no one noticed the rear windshield wiper had scraped off a leg and part of my skirt.

Later, on the drive to church, Mr. Kincaid assured Mrs. Kincaid. “It’s a phase.” He turned into the parking lot. “Lots of girls are tomboys.”

“I’m not a tomboy. I’m a boy. My name is River,” Rachel screamed from the back seat.

Church mornings became a battleground. Rachel insisted she wear Paul’s dress pants to church. The Kincaids almost missed the Palm Sunday service because Rachel refused to remove Joseph’s tie. One Sunday she slid into the minivan sporting a beanie. When Mrs. Kincaid told her to take it off, Rachel tugged away.

“Rachel,” Mrs. Kincaid turned back to face her eldest daughter.

That night Mr. and Mrs. Kincaid drove to the church in silence. Several hours later they returned to the parking lot, Mrs. Kincaid blowing her nose. “I don’t think this is a good idea, dear.”

“Honey, if we don’t take care of it now, it will get worse.” Mr. Kincaid turned the ignition, sliding the gear from “park” to “drive.”

“It’s for the good of our family,” he said, eyes over his shoulder as he backed out.

A few weeks later the Kincaids drove to a large house in the country with lush green lawns, a tennis court, and a swimming pool. Coming home, Rachel wasn’t with us.

Without Rachel, the drives to church were calm and peaceful. Several months passed before Mr. Kincaid drove back to the country house. Wearing a dress and flats, Rachel climbed into the back of the minivan in silence, her hair now long curls held back with a barrette. Mr. Kincaid called her “Rachel” the whole way home. River never answered.

The Kincaids settled into their old routines. While Mrs. Kincaid drove the kids to school, the twins squabbled and Paul and Joseph argued over football. River stared out the window, speaking only when asked a direct question.

The day River ran away, Mrs. Kincaid took the minivan to the car wash. Wheel rim disc brushes scrubbed grease and grime from the van’s tires and underbelly. Wrap-around brushes twirled against the windows before a high-pressure rinse washed each surface. Hot forced air blew back and forth across the minivan, costing me a hand and a pigtail. The light turned green and Mrs. Kincaid drove forward.