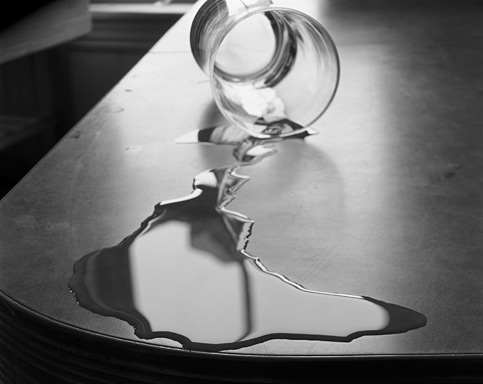 “Owen” was a dear friend from college. After graduation he moved back to New York and we stayed in touch for a while. He was the best pal a dame could have, massaging my lower back when I had cramps. I responded in kind by massaging his hands when he jerked off too much. We were each other’s wing person and study buddies. He was charismatic, kindhearted and funny.

Though friends speculated about the true nature of our relationship, I don’t recall a moment when sexual tension or chemistry crept between us. From the day we met, it never occurred to either of us to be more than friends.
.
Last week, after losing touch for about three years, we met at a bar. The first half hour was spectacular.

Then it got weird. I mean REALLY WEIRD.

As he stood up to go to the bar and refresh our drinks, he said, “Katie, because you’re fat right now and because I answer to a higher power much greater than any God, I’m going to fuck you.”

“Say what?!” fell from my dropped jaw.

Smiling, he said, “You’re welcome, Katie. No need to thank me (Right, because that was my intention). Fucking you is reward enough for my higher power. Some people think they have to travel far and wide to be a Samaritan. But I have found ways to consistently comply with my higher power’s request to be a good humanitarian, like fucking you for example. While I get our drinks just soak in gratitude.”


In this order, here’s the list that ran through my head:

Why hasn’t anybody killed this man?

What higher power subscribes to fucking fat chicks as a humanitarian effort?

What, he’s the Samaritan spokesperson for fuck locally, not globally?!

When did he become a spiritual whack job?

Who the fuck does this prick think he is?

Being fat doesn’t make me a charity case.

I hate this man more than cancer.

WHEN DID THIS BECOME A FUCKING DATE? OH, RIGHT, WHEN HE SAW MY FAT.

He returned with drinks and sat across from me, glowing. After a long, deep, satisfying breath, he said, “You’ve been swept away by gratitude. I can feel it. Katie, you’re so lucky you met me for drinks. How does it feel to be the recipient of such a generous humanitarian effort?”

“I can’t believe nobody’s taken a hit out on your life,” was the first thing I thought to say, and then said, “If you think I would let you anywhere near my vagina, you and your higher power need a lot more lithium.”

He was dumbstruck, yet couldn’t shut his pie hole,.“Oh, Katie, I’m not fucking you for me. This is about serving—” I had to interrupt. “You’re an offensive dumbass. Screwing fat people isn’t a humanitarian effort, it’s a fetish. Of which I want no part.”

I stood up and walked past him. Unfortunately, he grabbed my wrist. A rookie mistake. I punched him in the neck. When he yelped, we had an audience. He was hunched over in pain. My work was done, so I left.

Columns
Previous PostInterview: Kristy Bowen
Next PostLiving in the Countryside