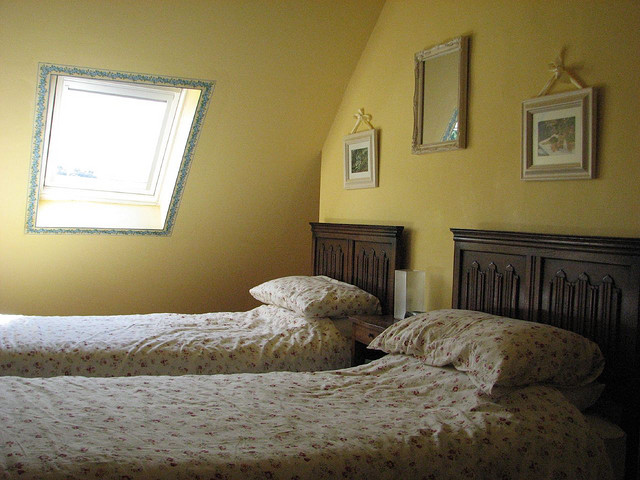 Tina Schweitzer’s* grandmother’s Boston Terrier’s testicles hang like bruised fruit under his tail. Tina calls them “balls,” but I won’t, can’t, don’t call them anything. We sit on the couch and watch TV. Charlie humps my leg. Tina laughs a scratchy grown-up laugh that makes me feel young and awkward and uneasy. She squeezes her fingers into a fist and out again. “You should touch them. They feel like big grapes.” I keep my eyes on Gilligan and Mary Ann and my hands under my thighs. She pokes her elbow into my ribs. “Don’t be such a prude.”

Tina Schweitzer’s parents are nowhere to be seen.

Tina Schweitzer’s grandmother stumbles through the living room to get a glass of rum and Coke, a cigarette clenched in her teeth to one side like a sailor, and cackles like a broody old hen, “You girls want a snack?” There are two jars of maraschino cherries in the door of the refrigerator. Once in a while she makes us hot fudge sundaes.

Tina Schweitzer’s older brother Frank lost his job at the warehouse. He sits at the kitchen counter and drinks with Grammy. He doesn’t wear a shirt. He doesn’t bother to put on his pants. His boxer shorts gleam white against the chair.

Tina Schweitzer thinks it’s time for me to learn how to use a tampon. She won’t let me out of the bathroom until I figure it out. “You have three holes. It’s the one in the middle. Not for pee and not for poo.” What did I know? I grew up in a house where pee was “tinkle” and poo was “making a fish.” The hole in the middle wasn’t on the map, so it didn’t need a name. Or instructions.

Tina Schweitzer weighs at least 150 pounds. At least 50 pounds more than I do. When I don’t do what she wants me to do she pins me to the floor, hands above my head, and sits on my stomach.

Tina Schweitzer has a boyfriend named Ricky Sewall.* Tina is taller and stronger than Ricky. She wrestles with him, too. Tina is making Ricky take her to the Junior High School prom and needs something to wear.

Tina Schweitzer tears out the pocket linings in my peacoat and dares me to steal a plunging-necked stretchy black maxi dress from the Hot Zone at Famous Barr. “Just stuff it in behind there. No one’ll notice. You’ll be fine.”

I liked stealing smaller things. Pocketing the cheapo earrings and nail polish was like giving someone the finger. This feels like a whole lot more. I am terrified. The adrenaline makes me sick. Later, brave. I hand her the dress. “I’m not doing that again.”

“What’s the big deal? You didn’t get caught.”

“I could have. Next time, do it yourself.”

“Aw. C’mon. You’re better at it. No one ever suspects you. You look so innocent.”

I grab my coat.

“Don’t leave. I thought you were going to spend the night.” Her eyes go all poor-li’l-old-me. “I’m sorry. I promise I’ll never ask you again.” She crosses her heart like the lady in the Playtex commercial we make fun of. I am butter against the hot knife of her will.

Tina Schweitzer and I put on our nightgowns. We don’t brush our teeth.

Tina Schweitzer’s room has twin beds with navy plaid coverlets. And a big window that looks out over the garage. Tina gives me a play-by-play of her plans with Ricky before we go to sleep. I’m still mad, but I pretend to listen. I wake to the sensation of someone holding my foot and moving it up and down. I expect Tina doing something to freak me out—payback for her apology. Instead, I see Frank.

Frank’s penis extends straight up out of the flap of his underwear. He has my foot in his hand against it. Frank catches my eye, gives me a slow, leering wink and brings the index finger from his other hand up to his lips. I bury my face in the pillow. The rubbing gets faster, more urgent. Frank makes a muffled moaning sound and slumps against the wall. My toes are goopy, wet. The room deflates. Frank gets to his feet, walks over, pulls my head up by the hair and clamps his sticky hand over my mouth.

Thirty years pass before I say a word.

*Some names have been changed

Anne Riesenberg is an acupuncturist and meditation instructor in Portland, Maine. She is completing her MFA in Creative Writing at Lesley University. This is her first publication.