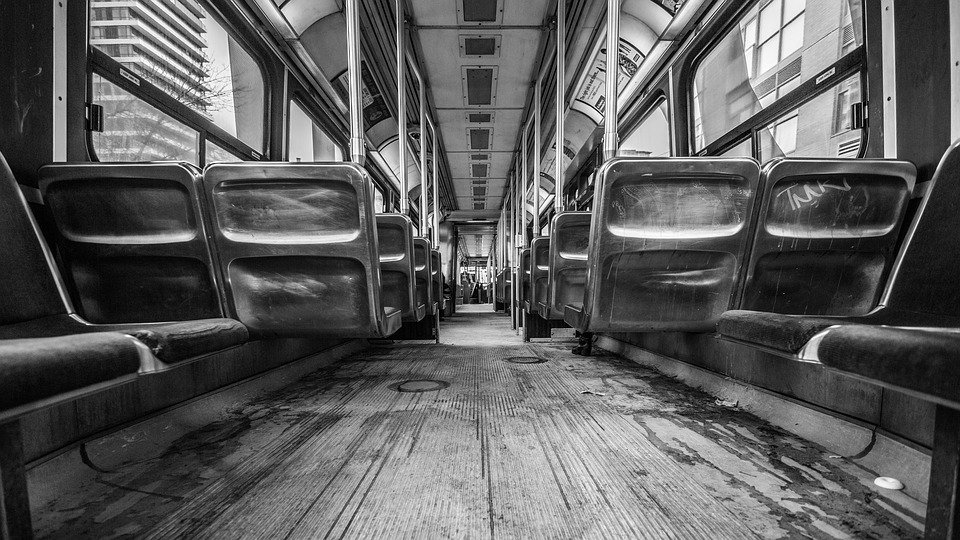 Soft at the Edges, Going Bad

It happens on the 42 bus, right after I email the woman I work for, Ellen, practically the thousandth email of the day because she requires that level of attention, and her auto-reply tells me she’ll be “traveling internationally with family for two weeks and so may be delayed in responding.” I fucking know, I almost say out loud. I’m sitting there with the woman’s parrot, Ellen’s parrot, Constantine, in a cage on my lap because Ellen is persuasive and needy, and Constantine’s cage is covered in muslin because, per Ellen, relocating disorients him.

I’m probably five minutes from home, and the man in the bus seat a row up from me and diagonal is saying “motherfucker” on repeat but looking down and not at another person, so it seems like one of those generic mental health mumbles not directed at anyone in particular. The older woman next to me stands and moves back a few rows, and I set Constantine’s cage in the warm spot where she was sitting and steady it with my hand as we finally make it up the last stretch of Connecticut, that push where it feels like the bus isn’t going to lurch itself over the hill and then does. It’s the first Friday in spring, and the flowering trees punch color out into their airspace. The rats scamper. There’s no toil to their pilfering from the sidewalks in front of bars near the apartment I share with my daughter, Salem.

She and I have plans to 1) meet at the bus stop by her school and our apartment and then eat at the Dominican place on the corner; 2) watch mindless things on Netflix until we fall asleep on the L-shaped couch in the living room where I will wake at 3 AM as drunk people exhaled from bars call the people they are leaving or the ones they are heading toward and then car lights travel along the wall, across the scavenged art and the nail holes we couldn’t be bothered to patch, and the light settles for a second on Salem’s sleeping face, and I pretend in that pocket that nothing bad will ever happen to her.

Two stops before mine, the man’s “motherfucker” mumbling escalates, and then he is standing. He’s in a three-piece suit, and he’s young, which is an atypical combination for this kind of public transit behavior, but okay. He’s stopped looking down and has started pointing at a man at the front of the bus who is 20-something, sitting with a girl, both of them in wireless headphones and moving their heads to a beat. Headphones man looks up when he sees motherfucker man pointing, and headphones puts his hands up in a who me? gesture but then looks at the girl next to him. I should say woman. She’s probably in her twenties, too. The pigeons are of course unaffected. Outside the bus window, they cluster on concrete and then take off all at once. They know and don’t care that no one gives them enough credit.

As the yelling gets louder, Constantine the parrot, of course, starts mimicking it: motherfucker, he yells over and over in his parrot voice, and that upsets the man more. “What the mother fucking shit is that?” he starts yelling, but he’s still staring at the headphones man at the front of the bus, and then the girlfriend, the woman, steps forward and says, “Cut this shit out, man,” and a second later, just as we’re pulling up to my stop, just as I see my daughter’s curls framing her expectant face right outside the bus window, a gun I never saw goes off and the man in the headphones falls, and the girlfriend screams and drops her face to his so they are like one face. All of it, just like that in not even a minute.

I should wait, I should be a witness. But I pry open the bus’s back doors, grab Salem, and start running. Pigeons arc up against the brick wall of our building, and in a minute we are inside. Even in that moment, I am thinking about what I’ll tell the woman I work for, what I’ll tell Ellen, about the ridiculous parrot I’ve left on the bus, but I will not go back. The parrot will be one more weird thing in the weird and sad and inexplicable scene the police come upon. But I will not go back to Ellen’s. I will change my number. Salem and I will move out of the city the following week and to the finished garage apartment next to my mother’s log house in the mountains outside Denver. I will start to work for another difficult woman who will email me late at night with “Urgent!” in the subject line. I will sleep with people I sneak down my mother’s driveway and past my daughter’s closed door, but nothing that will stick. I will buy Salem high school clothes and watch her graduate and drop her off at a state school only two hours from my mother’s and then sit on the side of the road and stare at the mountains until I think I can stop crying. Salem will ask me one day when she is on her way to her second year of college and when guns are rarer than they were then: am I making this up, or did we witness a shooting once, and I will tell her because I have tricked myself into thinking there is some benefit to softening all the edges for her, no, I don’t think so, no.

Amy Stuber’s fiction has been published most recently in The Southampton Review, J Journal, Arts & Letters, and The Chattahoochee Review. She reads flash fiction for Split Lip and lives with her family in Lawrence, Kansas. Follow her in Twitter at @amy_stuber_.
Fiction
Previous PostMemoir of a Girl in Twelve Poses
Next PostIF MY BOOK: If the Ice Had Held, Wendy J. Fox