Welcome to another installment of If My Book, the Monkeybicycle feature in which authors shed light on their recently released books by comparing them to weird things. This Week Melissa Scholes Young writes about Flood, her debut novel just published by Center Street.. 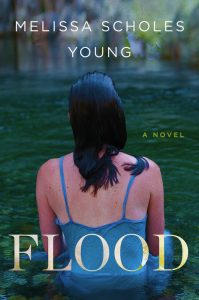 If Flood were a beer, it would be Bud Light in a can, not a bottle. The Koozie would read “God Made Beer Because She Wanted Us to Be Happy.” Flood could have been a PBR, but the hipsters ruined those for all of us.

If Flood were a potluck dish at a family reunion, it would be a casserole made with cream of broccoli soup. It could have been a Jello salad with a can of pears, but Midwesterners respect a crusty French Onion topping.

If Flood formed its own political party, Becky Thatcher would want to be its leader but Tom Sawyer would stuff the ballot box just so Huckleberry Finn would have to write Jim’s speeches.

If Flood were a quilt, it would be the Family Tree pattern and each of your twenty-seven first cousins would contribute a square. None of it would match but it would be the first thing you’d grab if the Mississippi River started to rise and you had to run.

If Flood were a television series, it would be Friday Night Lights. You’d show up for hometown football games but shake your head every time Tim Riggins defends Donald Trump.

If Flood were a tattoo, it would be a raft. You’ll find out in chapter five at Aunt Polly’s Tattoo Parlor.

If Flood were an album, it would be Same Trailer, Different Park by Kacey Musgraves and you’d turn up the volume in your pickup truck every time she sang, “We think the first time’s good enough, so we hold on to high school love.”

Melissa Scholes Young was born and raised in Hannibal, Missouri, and still proudly claims it as her hometown. Her writing has appeared in The Atlantic, the Washington Post, Narrative, Ploughshares, Poets & Writers, and other literary journals. She teaches at American University in Washington, D.C. Flood is her first novel. Find out more at melissascholesyoung.com or follow her on Twitter at @mscholesyoung.

0 replies on “IF MY BOOK: Flood, Melissa Scholes Young”