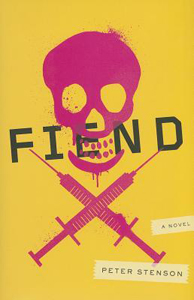 Given the subject of Peter Stenson’s debut, one has to assume that his TV is permanently stuck on AMC. Mixing the worlds of two of the network’s most popular shows—Breaking Bad and The Walking Dead—Fiend is a meth addict/zombie literary mash-up that begs to be filmed. The only way it could get any more zeitgeist-y is if it was set in a 1950’s advertising agency.

Chase Daniels and his best friend Typewriter are a pair of hopeless addicts, staggering from hit to hit with no long term plan, no money, and barely any vestige of self-respect. Their lives change when they look out the window and see a little girl chowing down on a dead Rottweiler. Is this violent vision nothing more than a drug-induced hallucination? Apparently not. It turns out that the entire country has degenerated overnight into George A. Romero’s worst nightmare. Fortunately, there’s something in the chemical makeup of crystal meth that makes addicts immune to the epidemic. Less fortunately, they’re possibly the least well-equipped band of dropouts and losers on the planet, and if mankind’s future rests in their hands then we’re probably better off as mindless zombies.

The world Chase and Typewriter inhabited was always a brutal one. Now that its population consists solely of addicts and ravenous zombies, it has become even more so. There’s a starkness and minimalism that’s entirely in keeping with the author’s subject, illuminating the horror in Technicolor. Chase’s gushing, high-speed monologues only add to the air of frenzied violence.

There are clear metaphors to be drawn from Fiend’s unlikely scenario, and it often feels more like a blood-splattered fairy tale than a conventional zombie novel. The addicts, dealers, petty crooks and meth cooks who inhabit Chase’s world have always turned their backs on polite society. Now polite society is biting back. Stenson has Middle America firmly in his sights, as the entire country is reduced to a level of dog-eat-dog barbarism:

“I’m ready for demonic laughs and for my throat to be ripped open and I’m pointing a pistol at a La-Z-Boy and a TV and a framed Norman Rockwell print, the one with the little boy and girl staring at the sun, the one that makes you feel like true love is shit you know about from grade school.”

Having set up this kind of imagery, and found the novel’s sparse yet frenetic tone, Stenson at times doesn’t seem to know where to head with it. The plot is as simplistic as The Walking Dead at its weakest, as the characters stumble from one zombie-infested location to another. Maybe the intention was to replicate the episodic structure of the zombie shoot-‘em-up games that have flooded the market. Chase himself wonders if Typewriter is “having the same trip—a two-person shooter arcade game versus the entire world”. But no matter how knowing or media-savvy it is, the narrative doesn’t have anywhere to go. A tragic love story keeps Chase’s interior monologue moving along, but neither party is likable enough for us to be particularly bothered about the outcome. Meanwhile our protagonists meander from encounter to encounter, gathering weapons and losing allies along the way. They even end up bunkered down in an abandoned prison facility—the writers of The Walking Dead should probably consider a lawsuit.

Stenson’s mastery of tone and his creative use of language give Fiend its teeth, but the basic plotting at times renders it simplistic and dull. Even Chase’s junkie ramblings become monotonous. It just goes to show that there’s more to a good zombie story—or a meth addict narrative—than a string of failures and brutalities. You also require some enigma, a conflict, and a character arc to pull you through. Where’s Walter White when you need him?