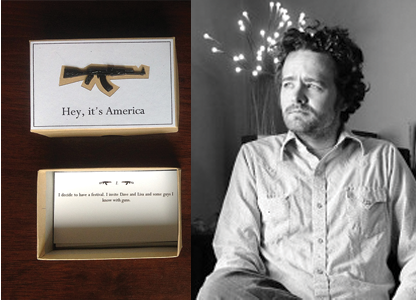 Ryan Ridge writes and teaches in Southern California. He is the author of the story collection Hunters & Gamblers and the poetry collection Ox. In 2013, Mud Luscious Press will publish his novel(la) American Homes.

Monkeybicycle: Rust Belt Bindery, run by Meredith Lynn and Blake Kimzey, says its mission is to work “collaboratively with writers and artists to put out work that emphasizes the relationship between the visual and the written.” Hey, it’s America does that by including the artwork by Genevieve Lawrence and also by being printed on business card size pages, all unbound in a tiny box, decorated with a plastic assault rifle. It is a fascinating way to read a physical object. How did this end product of Hey, it’s America come about?

Ryan Ridge: The book box was Meredith’s brainchild. Hey, it’s America is a story told in thirty-three short (numbered) sections and she felt that a lot of the humor and pathos emerges from the breaks between the beats and so she came up with the card idea because she felt the action of flipping from one card to the next card would underscore that. The thing I like so much about having a chapbook printed on small cards is that even though the cards are numbered, an ambitious reader can rearrange them and, in the process, remix the story to completely rewrite it if they so choose. Or they can use the cards to practice magic tricks or even build a little house.

Of course, once you have a story stack (replete with artwork) it brings up a whole new set of questions like: Is a book still a book if it isn’t bound? Does it even matter? How do we house these cards? Meredith’s answer to the housing question was a brown box with a toy gun on top. She found a website that sells little custom ornaments (special weapons) for G.I. Joes and we went with the miniature assault rifle you see on the cover. It’s technically a recreation of a Chinese gun, but we figured no one would notice.

Mb: You’ve also been lucky enough to have work produced by BatCat Press, where your poetry collection Ox was made as a beautiful miniature hardback book in an equally tiny and beautiful slipcase. How does your work seem to find itself as a part of these distinctive printing ventures? Is it what you strive for as an author, or merely happy coincidence?

RR: I‘m obsessed with design-orientated things (I’ll cop to watching and enjoying TED talks and architecture documentaries) and I love, love, love small press literature (with few exceptions, it’s where the real publishing action is these days) and so when you merge the two (literature and design) you get pretty amazing results. I’ve been lucky indeed to work on projects with presses like Rust Belt and BatCat, both places that esteem the art of the book—as–-object with equal regards to the book’s content. Noah Falck’s Snowmen Losing Weight (released last year by BatCat) may be one of the best-designed poetry books I’ve ever seen and the poems contained therein are equally badass. They just did a second run. Worth every penny. To answer to your question: It’s definitely something for which I strive.

Mb: Though written and published before the Dec. 14th shooting at Sandy Hook Elementary, it is hard not to connect some dots between that event and lines like this in Hey, it’s America: “The guys I know with guns say that guns are as important as the Constitution itself. They say that a well-armed populace is the best defense against tyranny but I think that they’re quoting other guys with guns when they say these things.” For you, what is the importance of a work like Hey, it’s America in the face of this shooting in 2012?

RR: I don’t think this small book provides any defense from the pervasive rightwing gun nut lunacy currently in vogue in our country. A work like HiA certainly makes fun of Second Amendment purists and satirizes consumer culture in general, but its reach is at best (very) limited. I’d equate the endeavor to spitting at a moving train: expectorating does nothing in terms of slowing the momentum of the train but I’ve at least expressed disgust at the direction it’s headed.

Mb: On a much lighter note, you chose to use “fricking” in several places as opposed to “fucking.” Can you explain to us about this linguistic choice?

RR: Only a knucklehead would use the word “fricking” instead of “fucking.” The narrator here is a fucking knucklehead.

Mb: We know that your novel(la) American Homes is forthcoming from Mud Luscious Press later this year (which we are of course super excited about!), but what else is in the works for you right now?

RR: In terms of completed projects, I’m happy to have a chapbook of conceptual chatbot poems, 22nd Century Man, coming out in March from the awesome folks at Sixth Finch. (Just in time for AWP, we hope.) As far as works in progress, I’ve always been a juggler. I like to have a couple things going at once. I’m currently tinkering with a sequel to American Homes called American Literature. It’s slow going, but fun enough to press ahead. But the main thing I’m working on at the moment is a collaborative effort with the writer Mel Bosworth. We’re plugging along on a kinetic collection of interconnected prose poemy / flash fictiony epic miniatures tentatively titled Camouflage Country.