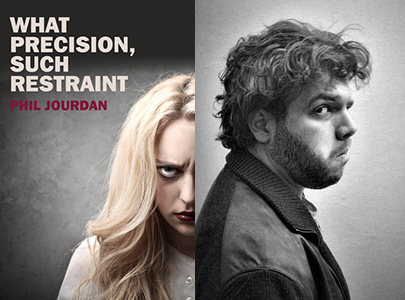 Phil Jourdan is an author and musician. He fronts the surprisingly good rock band, Paris and the Hiltons.

Monkeybicycle: What Precision, Such Restraint is one of the most peculiar and interesting short story collections I’ve probably ever come across. While you call the stories experimental, I think the real experiment here is the book itself, from title to blurbs to the very last page. What decisions went into the construction of this collection?

Phil Jourdan: Yes, I think the book itself is the experiment, but calling anything experimental seems to chop the size of your audience down to that of a squirrel’s nut. The book is out there now; either you read it or you don’t, and if you read it, you’re probably going to find it a bit baffling. It was designed to be baffling, but on the other hand it wasn’t meant to be unenjoyable.

In short, I wanted to create a book of absolute indifference. I think there are strong moments in it, some serious stuff, but the trick is that the book itself doesn’t make much of a distinction between its serious bits and its insane, stupid bits. From one story to the next, the tone shifts abruptly enough that it might be considered incompetent. But it’s calculated. It’s difficult to make sense of the whole. I’ve called it a shaggy dog collection, and I think that’s the best description I’ve come up with. It goes nowhere, but along the way you get stories about coming out as gay in the most vicious, tables-have-turned way possible, a rich kid hacking into his unconscious mind for the lulz (it goes wrong), a terrible dystopia where punctuation has been outlawed (with tragic consequences/uprisings), and the ramblings of a murderer for like 60 pages (he never quite gets to the confession, and the book ends).

The thing is, I think books of this sort are worthwhile. They’re not the easiest read, and they’re not financially interesting. But constructing it was fun, and I enjoyed all of it. And I had the means to publish it. Plus — I have enough friends now that if I lose 25% of them every time I release this kind of crap, that means I’m technically losing fewer friends every time, right? That’s good number crunching. It’s just science.

Yeah, I know you’re in a hurry. You’re in hurry because you’re a kid. Chill the hell out. I don’t know what you’re after and right now that doesn’t matter. I want to lay the rules down before we talk business, okay? Okay? Okay. So, rule number three. It is a bad, bad idea to fuck around with language. I know it’s all the rage right now, but you don’t want to do it. Trust me. I get some intellectual type guy come in here every few weeks, always a different one, and he’s all about the relationship between language and reality. Always the same story. Guy wants me to help him overcome the barrier between the linguistically structured universe and the universe as it really is. Well, I am telling you now. You don’t want to mess with that stuff. You won’t like what you find. See, I can tell from the sulky face you’re making that you’re one of those intellectual types. You probably heard about the Lombardi thing, and you want to know how you can replicate that. Jesus. Sit down, all right? Let me explain something to you.

The Lombardi thing was a fucking disaster. You don’t know what happened, no matter how correct you think your information is. Lombardi was my client, and I know what happened. You want to know? You curious? Okay. I’ll tell you. But you’ll be disappointed. I’m told people think the Lombardi experiment worked. It didn’t. People think Lombardi has crossed the divide between language and the real. He hasn’t, or not in the way you think. No sir. There isn’t a ferry between the two realms. You know that, right? It’s not like I can give you a pill that you take whenever you want to escape the clutches of language.

Mb: There is an obsession with language and thought here, and you’re currently a PhD at the University of Warwick. What is the relationship between your studies in philosophy and your fiction? Which drives which?

PJ: I did my masters in philosophy, though my PhD (in comparative literature and religion) leans that way as well. I don’t know — I think my obsession with language came about through the psychoanalytical angle rather than philosophy, then infected everything. I’ve always like William Burroughs’s simple formulation of language as a virus. It infects, consumes, and destroys. It transforms what it takes over. I suppose I’d be very skeptical around people who genuinely refused to find language in the abstract a fascinating thing. So that played a big role in the writing of this new book. Almost all the stories have something in them that relies on language being slippery.

I’m pretty sure that my short fiction (my least comfortable form) is the most overtly philosophical. When I get into “novel” mode the importance of Big Ideas takes over. Which is to say: I like philosophy best when it deals with little ideas and convinces itself they’re enormous. For instance, I’ve wrestled with Hegel’s Phenomenology of Spirit for several years now, in private then in classes and lately on my own again with a couple of people, and though the fascination with that book has only grown in me, so has the conviction that the subtleties of his “difficult” chapter on Force and the Understanding are really not so important that you should let any philosophy student sneer at you for not getting them. Remember: When you meet a philosophy grad student, you may not be able to explain the failures of Kant’s aesthetics, but they won’t know how to crack a joke without crying. Because humor is terrifying, unless you’re writing a PhD on the uses of irony in Nietzsche and Kierkegaard, probably as a well to tame the very idea of humor. Anyway, the rambling is over. As a novelist, I prefer to think in big themes: regret, weakness, redemption. Stuff like that. It stops being philosophical and veers into the important.

Mb: You also run Perfect Edge Books, and make music under the moniker Paris and the Hiltons, where you seem to specialize into creating albums inspired by works of literature. How have these changed the way you write fiction?

PJ: Perfect Edge is a good way for me to ensure I can publish people I think should be published, and get some publishing experience too. I’ve talked about the “whys” of Perfect Edge in various places, and it’s all very lovely and idealistic, but one reason I haven’t mentioned very often is that I wanted to be on the other side for a while, so I could protect myself. Knowing the kind of shit publishers put up with has changed almost everything I thought I knew about the writing world. You hear horror stories about naughty publishers daily, but authors aren’t so keen to accept how insane and fucked up some of them are when dealing with publishers. You turn down a submission and you get, in reply, something bizarrely vicious and profane that goes on for three paragraphs. Or you make a small mistake — say, your copyeditor didn’t catch as many typos as everyone would have liked — and the shitstorm that ensues with the author (if the author can spell out a legible email without needing a copyeditor) drains you of all sympathy for their plight. Stuff like that. It must be like running a record label; starving musicians are awesome, but record labels are basically meh, invariably.

Paris and the Hiltons is an ongoing experiment. How many people know I have a band called Paris and the Hiltons, but have forever chosen to refuse to listen to the music because of the name? It’s pretty fun. I’ve had dozens of people, over the years, suddenly realize the music itself wasn’t reflected by the stupidity of the name. It’s a litmus test. I feel my fiction writing has been mainly untainted by the music. The music’s definitely been affected by the fiction. Writing was my first love here. I think in terms of albums, not songs; I think in novels, not stories. There’s something there.

PJ: Well, you visited me in London probably four or five years ago. I have since converted to a standard UK keyboard. I just couldn’t find a balance between desperately wanting to be unique and amazing on the one hand, and able to type on the other. Functionality won out.

I write in English because it’s what comes most naturally to me nowadays. My written Portuguese is crap. I can write in French, I suppose, and have done so (academically) but nothing feels right the way English does. It was my third language, but I like it the best, so I consider it my own now.

I should make two things clear before I reveal all of this to you. Firstly, I am not insane. Others will chalk it up to my “history” of mental illness. You will not, because you will have read this letter and you will be quite aware that I have not “gone mad” — as everyone you show this to will want to put it. Secondly, you are not to blame for any of this; not quite. You are a nice lady. I enjoyed your lessons. There was no reason for me to do what I did, and the sooner you accept that, the sooner you believe that, the better. No doubt I should not be dishing out advice to the woman whose son I murdered. Take it with a pinch of salt, but trust that I am earnest.

Mb: You’re one of the busiest people I know in the whole world. What projects are you working on now?

Purchase a copy of What Precision, Such Restraint here, & read more from / about Phil Jourdan here.