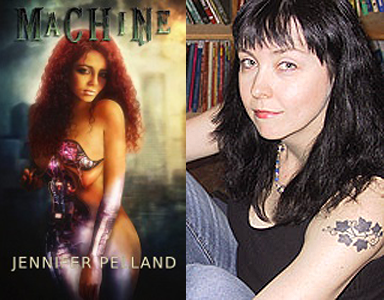 Jennifer Pelland lives outside Boston with an Andy, three cats, an impractical amount of books, and an ever-growing collection of belly dance gear and radio theater scripts. She’s garnered two Nebula nominations, and many of her short stories were collected in Unwelcome Bodies, put out by Apex in 2008. Apex also released her debut novel, Machine, in 2012.

“Damn it, we shouldn’t ave to do this.” He set both hands flat on the table. “Celia, there’s a war being waged against our way of life. They’re legislating what we can and cannot do with our own bodies, and that’s not right. Not in America.”

Monkeybicycle: You tackle a lot of huge ideas in Machine. One of the most interesting to me has to do with the ownership of the body and what rights we have with our bodies. There’s political language and a climate that reminds me of the abortion debates, where perceived morality is used to control what a person can do with their body. How much of current events or the current political climate fed into this? How can books about the future tell us about our present?

Jennfer Pelland: Yours isn’t the first parallel I’ve heard drawn between my book and the abortion debate, but when I was writing it, I was consciously thinking more about transgender rights, including the right to gender fluidity. I was very lucky to fall in with a group of gender non-conforming transgender folks when I was in my early 20s, as well as people who would nowadays call themselves “gender queer,” but if that word existed back then, I hadn’t heard it. I had trans friends who were more than happy to confuse people with their gender expression, and one of my friends told me that she wished she could switch between having male and female genitals based on what she wanted to have at any given time. She didn’t feel that made her any less a woman, and I agree (although it took me a while to wrap my brain around the idea). But genital surgery beyond the body-mod level is restricted to people who’ve jumped through very specific hoops and satisfied someone else’s standards of being ready for “reassignment.” There is currently no right to genital gender fluidity unless you happen to be born with it, or unless you have the resources to get your surgery done in a country that doesn’t hold to those standards.

The controversy in the book around simply downloading into a new body was probably more close to the modern abortion debate, in that I’m offended by people using their religious beliefs to tell other people how to behave. So I pretty directly mapped the Operation Rescue movement onto the protesters in the book. But I didn’t want it to be that black and white, which is why I threw in the atheist who protested this technology on the basis of what it meant for society rather than what it meant for souls. I think this book tells us about our present simply because that’s when I wrote it. All science fiction is about the time it was written in, not the time it’s written about. What I could hope is that people will read this and realize that humanity is more diverse that they might realize, and that perhaps they should be more open-minded about gender and personal physical expression. Right now there are gender fluid people. Right now there are genderless people. And on top of that, right now there are people who are so kinky that they make Fifty Shades of Gray look like a Dr. Seuss book. There’s really nothing in my characters that doesn’t already exist today, except for the technology to physically express their true selves.

“And did you hear? NASA wants to terraform one of the Jovians. It’s going to be a one-hundred-year project, and I want to live to see how it turns out. I want to be alive when they finally figure out how to communicate with the sea creatures of Europa. There’s a cryo-ship that’s due to leave the solar system in the next twenty or so years to visit an extrasolar planet, but we won’t hear back from them for three centuries. I want to be there to see their report. Celia, so many incredible things are happening that I don’t want to miss, and I don’t have to. Not when we can live in bodies like yours.”

JP: It’s coming, like it or not, and I think the challenge is to figure out how to live with it. There are already outliers doing things like putting magnets inside their fingertips so they can feel magnetic currents, or having computer glasses grafted to their faces. And we’re already seeing a rise in extreme plastic surgery and body modification. It’s the outliers and the rich who will lead the way, as usual, but eventually, I think it’s coming for the rest of us. My main fear is that if you end up needing implanted technology to be a full member of society, and that’s only available to those who can afford it, then the underclass will fall even further behind. As for the extreme plastic surgery, if it comes down in price like so many other technologies, I think we’re going to start seeing people expressing themselves in surprising ways. We’re already seeing this through body mods like tattoos, piercing, scarification, and sub-dermal implants. There’s no way to know if this trend will continue, but it would be fascinating if it did. Also important will be the ability to reverse these procedures. I think people will be more likely to undergo radical transformations if they know that they can reset to their original factory specs if they want to later.

Mb: The glasses everyone uses in Machine reminds me of Google Glass, which was released pretty recently. There’s a moment when Celia leaves her glasses behind and it feels shocking, even so early in the novel. I read one of those first customer reviews of Google Glass and I remember the reviewer saying that they can’t imagine going back to a world without Google Glass now that he’d tried it. How do you think technology is changing us, even as we develop it?

JP: I wish I’d copyrighted those! Gah. I hate myself some days.

I think there’s no question that once we get truly wearable or implantable computers, we’ll be hooked. I’m already at the stage where, if I accidentally leave my smartphone at home, I panic. What if I need to look something up? What if I need to check email? What if Grumpy Cat posts a new photo to her web page?!? If I’m already this twitchy, I can’t imagine how twitchy I’d be if I had to be separated from a wearable computer. My hope is that having nearly all the information in the world available on our faces or in our brains will change us to become more interested in knowing actual facts rather than relying on authority or hearsay, but I doubt we’ll be so lucky. Instead, we’re more likely to end up with ubiquitous filming of our lives and the YouTube-ification of our society.

Mb: There’s a lot of sexuality in this novel, which felt oddly appropriate, considering the kind of changes to the body depicted. How much do you think our physical body plays into our psychology?

JP: I wanted to show how extreme sex can be good if you’re in it for the right reasons, and bad if you’re in it for the wrong reasons. My protagonist is the latter, but many of the characters in the book are the former. As for the brain/body connection, I’m told by people in the know that the biggest problem with my book is that our brains and bodies are so closely tied that there’s no way to be the same person if you’re put into a different body. Even simple body modification can change how your brain works. A study recently showed that people who use Botox to prevent frowning not only disassociate themselves from emotions that would cause them to frown, but also have trouble understanding what it means when other people frown. In other words, if you can’t make a face, you can’t understand the emotion behind that face in yourself and in others. Again, this isn’t science fiction. This is happening right now.

Mb: I love this novel maybe even as much as I loved your collection, Unwelcome Bodies, which is brilliant. What are you working on now? and what’s coming out next?

JP: Oh, this is the part where I disappoint you. I don’t write very much anymore. At this point, I’m down to two or three short stories a year. I discovered that holding down a full-time job while writing and belly dancing was just flat-out impossible, and belly dance won over writing. I love performing, I love the community, and I love the fact that my body makes art. I figure writing will still be there when my knees finally give out. But in the meantime, two of my most recent published stories combine genre and belly dance. One is in Unidentified Funny Objects by UFO Publishing, and the other in Glitter and Mayhem by Apex Publications.

Read more from / about Jennifer Pelland here. Buy a copy of Machine here.