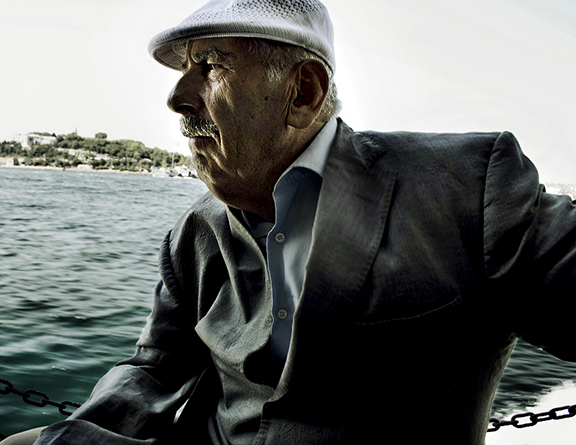 My dad went to visit Uncle Fred in prison. Bald, skeletal and sitting in a hospital bed, Uncle Fred looked like a gambler spreading out a four of a kind. “I’ve won, got away with murder,” he said.

“How so?” my dad asked. The trial was still ongoing.

My dad had a big diastema and it made his charming and rare smile slightly feckless. I’m sure the two of them sat there grinning at each other for a good long while.

My dad revered him: Uncle Fred figured out the real estate thing before anyone, could’ve had his own infomercial. It was this simple: make an offer that is good for you, bad for them.

I was always a little afraid of Uncle Fred. He didn’t pretend to like kids—or anything else. That’s why dad told us to call him “Uncle.” He had a huge house, but everything inside looked broken and dusty. The indoor pool was empty. A taxidermy sailfish was suspended on the wood-panel wall above the white concrete hole. As if he leapt from the ocean in joy, then found the ocean drained and gone. When Uncle Fred and my dad would have drinks at the Four Seasons to impress their girlfriends, neither one of them would ever pick up the check. It would sit there for hours. Watching my brother and I sleep in the banquet, Uncle Fred knew he had the upper hand and he wasn’t going to let it go. On a fated houseboat trip when in two-foot seas, the waves began to break over the bow and the chandelier swang from side to side, Fred said to my dad, “We’re taking on water. Should we throw the women and children over?” One of the girlfriends put her hands on my shoulders from behind, to comfort me. I looked over and the other one slipped an orange life vest on my little brother.

The fact that Uncle Fred was capable of anything was just a family joke until, year after year, it became more and more real. We had been given Uncle Fred’s family history: his father moved to the States from Germany after WWII. At the beginning of World War I, his father had five brothers, all of them six foot six. In 1947 Fred’s dad was the only one alive. He had been an engineer in Germany but was forced to work construction in New York. Was it a surprise that Jewish bosses shorted Uncle Fred’s kraut dad at the end of the workweek? Not to Fred.

The part of the story we didn’t get until later, when the first of Fred’s sons was dying, was this: Fred took his two boys and first wife on a camping trip. The boys were eight and ten. When the wife went off for a hike, Fred packed up the car and the boys and moved to another town, changed his name.

Although he wasn’t tall, his two sons were enormous. Both of them played basketball in college. They had to. Uncle Fred wasn’t going to spoil them. One of them ended up a big charismatic drunk. The other worked for Fred for years until a minor betrayal got him fired, disowned. They both got cancer and died in their forties.

Karma came to Uncle Fred in the form of a mail order bride from Germany, the detestable Rose. She got off the plane and Fred knew she was the one. They were married. She was number six. Fred’s vasectomy was reversed. She had a son. Three years later, a good-looking young guy shows up from Germany. Rose says he is her brother. She wants a divorce. She wants half of Fred’s sixty-five million. Fred laughs. The pre-nup was written in both English and German – no way out. But Fred has made a crucial, un-Fred-like mistake. He gave her a “job” with his company so he could deduct the 300k a year he paid her. She couldn’t be an excluded spouse and an employee. Fred was ordered to pay. Like the imp that got burned by the princess, he turned red with rage.

She showed up with the “brother” to collect the check. Shots were fired. Everyone took a bullet. The detestable Rose died. The other two lived.

Uncle Fred died of cancer in the infirmary. His millions went back to Germany with the little boy he would never know and the “brother” who was who he said he was.

David Inglish has inadvertently led police on a high-speed chase, shaken hands with a Bishop, jammed with Neil Young, pissed next to Bono, and been tubed in Bali. He attended five high schools in four years and two colleges in seven. Somewhere in that time he was the keyboard player in The Voices (roughly 1988 to 1992) when they almost made it big. His novels Before the Flock and W. B. Bugg’s Change of Heart are available in paperback and on Kindle. He holds an MA in Practical Theology and an MFA in Creative Writing from NYU. When not writing, he licks his wounds and tends to his family’s whims and needs. Follow him on Twitter at @david_inglish_.