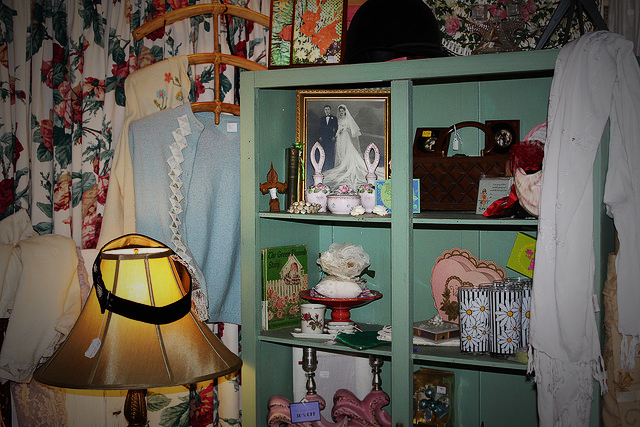 Antiques and Other Sundries

Paying up on the booth had meant not paying her house rent, which she’d believed acceptable until the landlord evicted her. Now Marsha was sleeping in the booth, on her merchandise. The iron bed frame with its thin, bounceless mattress had been an acquisition from a nursing home basement in Gary, Indiana; only the pillow was actually hers. The rest of her personal items were in the antique store employee bathroom, tucked into a medium-sized rolling luggage bag. She felt the hard drive of a fierce spring pushing into her shoulder and thought herself a shiftless huckster for hocking something so inferior. She pulled at the chenille bedspread, dabbing at her nose with the nubbly white softness.

Her eyes were level with a carved wooden monkey statue, a remnant from an estate sale. In the half-darkness, she could see its hard little face and almost imagine it smiling at her, mockingly. She had messed things up, it seemed to suggest. She pursed her lips and closed her eyes, feeling frustrated that it continued to stare.

“Don’t,” she whispered, wondering if it was for her own benefit.

The bedspread had stiffened where her nose had dribbled and now it chaffed her neck. She wondered where the husband had gone after he’d left her. Someplace nice, probably. Someplace with white sand beaches and lots of those little drinks served in coconut shells. She felt old to start over, and her adult children had concluded that this was true. So opening a booth at the local antique store had seemed small enough, possible enough. But she wasn’t making much of anything and was constantly spending what she did get trying to replenish stock. She had not told the children about the eviction.

Her throat toughened against the urge to cry. The monkey smiled.

In the morning, she rose from the bed wondering if she had slept at all. At that time of day, she was normally making coffee for the husband, two teaspoons of cream and one of sugar. The husband would read the newspaper from the day before, given to them by the neighbor who knew that subscribing to the news was too great an expense for the Nelson’s budget. Half-senile and wearing only his droopy boxers, Chuck would diligently drop the paper on their step at 6 am each morning, then return home. He stopped bringing it when the husband left.

Marsha dumped some instant in Travis’s mug. It was her day to run the store and Travis wouldn’t be in until Monday. She’d rinse it out in the bathroom sink and hope he didn’t notice. It was also his instant that she was drinking.

She sighed and walked into the bathroom to change clothes out of her luggage bag. In the mirror, she glanced at her sad eyes, her body that felt sloppy and disheveled out of its clothes. Creping skin. That is what the products said they corrected, and that is what they called this type of flesh. Creping. The husband had not directly commented on this issue, but as she stared in the mirror and considered the younger flesh she used to carry, she felt her inadequacy and the tears began again.

She remembered the husband’s lingering glances at Bailey, the neighbor girl who was an undergrad at CMU. Bailey was the type who seemed completely unfazed by life. Her boyfriends came and went, but every night Bailey would be drunk on the lawn with her roommates, laughing and playing beer pong. Once, she had watched the husband watch Bailey as Bailey squatted to pee by the large oak at the edge of the property line. She recalled the hoisted skirt that offered such a clear view of Bailey as the motion sensor light came on, spotlighting her while she was mid-stream. The husband had not noticed Marsha at his shoulder, and she had been ready to comment on the idiocy of youth when she saw the husband run his hand firmly over his crotch. She thought of him grumbling about her leaving the door open to the bathroom, calling her “unfeminine.” In that moment, she had really hated the husband.

Marsha unlocked the front door and sat heavily on the hard work stool. Her hair was still matted in the back and she tried hard to work it through her fingers and settle in, but even dampening it in the sink had done little to remedy the situation. She turned the key in the register to set it to the “on” position and prepped the drawer with the two hundred fifty dollars of starter cash.

The hours passed uneventfully as her mostly elderly customers passed through the store, picking things up mostly for the purposes of conversation and purchasing little. Often they held things aloft, asking “do you remember these?” If Marsha did not remember the item, she was given an hour-long lesson on the item’s uses and origins. If Marsha did remember, she was expected to listen to them reminisce. The widows hurt Marsha deeply. Their husbands had stayed until their dying moments. These were women that were deeply loved, even in their changing flesh. Marsha looked at them, searching for clues about what it meant to be perfect, or even just good enough. When they did make a purchase, they meticulously counted out pennies on the counter, the way Marsha had done as a little girl. Their hands were thin-skinned and shaky like baby birds.

She was almost ready to close when the girl wandered in, a roommate of Bailey’s. She was tall, athletic, and artificially bronzed. Her small shorts flirted with the crease of her ass, which was likely perfect. The girl’s hair was a little too long, Marsha decided. It would look better trimmed. Maybe her eyebrows were a bit over-plucked, too. Marsha busied herself spraying the counter and wiping it, over and over, a not so subtle hint that the girl should buy something or get out.

“Imbecile,” Marsha muttered under her breath.

The girl inquired about the price of the toy.

“A hundred dollars, plus tax,” Marsha lied before she could process what she was doing.

“What?” The girl gave Marsha the bitch face and thrust the toy at her. “This thing does not cost that.”

The girl slammed it down on the counter. “Bitch,” the girl said.

Marsha locked the door behind the girl, noting the scent of chemical perfume left in her wake. The girl got into her giant SUV and pulled away quickly. Marsha picked the toy up from the counter, planning to return it to booth forty-eight. The light blue tag on the ear clearly read $4.99. She squeezed the plush hard and watched as the orange fluff rose up between her fingers. Then, without giving it a second thought, she thrust it down the front of her jeans and peed.

Sarah Sorensen has most recently been published in Skin to Skin and Black Heart Magazine. She holds an M.A. in English from Central Michigan University and is completing a second M.A. in Film Theory. Find her on her blog at www.typefingertapdancer.wordpress.com.

Fiction
Previous PostCauliflower Tells You
Next PostAbove the Mandolin, the Fiddle