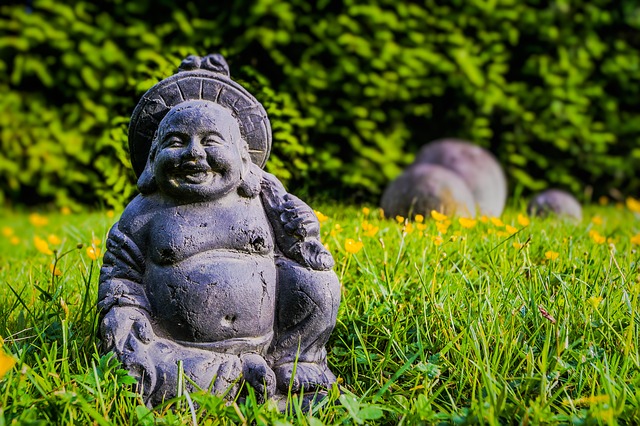 Last week I texted my colleague, “Stan,” to follow up on our projects. Instead of texting me back, he called, and the first words he uttered were, “Be Zen.” I thought, sure thing. Because that’s as easy as Kim Kardashian completing a sentence without using the word like.

“Stan” continued, “Katie, you have to let things happen. If you sit back and relax, everything you want will fall into place. Be Zen.”

Knowing me as well as he does—as an assertive go-getter—my response of uproarious belly laughter, replete with snorting didn’t faze him. I wasn’t laughing at “Stan.” Rather, at the notion itself. I’m a 24/7 dame. Admittedly, I’m prone to a dash of neuroses, a spoonful of pushiness, and a friggin’ one-thousand-liter bottle of work, work and more work.

We’re both from New York. Neither of us comes from money; we’ve always toiled away for everything we have. Please, the closest we’ve come to a silver platter is the one we’ve seen in Passion of the Christ.

After I finished laughing, I was so discombobulated; I didn’t know where to begin my line of questioning. Several hmms and haws later, I asked, “Where are you going with this? What’s the real world application of being Zen?”

Determined, “Stan” articulated his point: “Sometimes you have to let things be and wait for them to come to you.”

“Them? Who’s them and how are they going to come for me if they don’t know who I am? Shit, do I even want a proverbial them to come to me?” I asked.

He didn’t have an answer per se, except that generally speaking I should adopt a more Zen philosophy. Well, that’s worlds apart from waiting for a theoretical “them” to locate me, right?

Unquestionably, when it comes to self help, if something is presented to me without a scientific framework, the idea is vaporized into clouds of dust. Quite literally, I don’t know how to digest it otherwise.

As is always the case, the more we talked, the more intrigued I became. And he understood where I was coming from. Each of us changed enough through that conversation to find common ground. Another reason I fucking love “Stan.”

He’s Zen-ish. I’m not Zen at all. Though, of late, thanks to my Dad, I am fascinated by Kairos Greek philosophy. Perhaps experiential time versus Kronos time has Zen overtones?

Columns
Previous PostBook Review: The Guts by Roddy Doyle
Next PostGive a Junta to the People