Welcome to another installment of If My Book, the Monkeybicycle feature in which authors shed light on their recently released books by comparing them to weird things. This week The Best Small Fictions series editor Sherrie Flick writes about The Best Small Fictions 2018, guest edited by Aimee Bender and out now from Braddock Avenue Books. 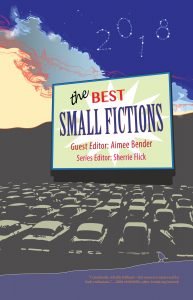 If The Best Small Fictions 2018 anthology were a Spotify playlist it, would be filled with songs about wolves and dead babies, immigrants and survivors, the moon landing, talking pigs, dreams, and dollhouses. There would be an El Camino and people drowning in lakes.

There would be many songs about dogs. Songs about being done wrong, of course. There would be one traditional American ballad about George Washington and his teeth. David Byrne would sing about Bob Ross, smashed dishes, snow, and eagles—but not The Eagles—and Berlin in the snow.

The songs would tangle in your head and make you think about weeping and also about lust. You’d hum along for days. You’d replay that one that you love, love, love until your stomach hurts and you can sing it by heart. There would be several, well, more than several if we’re being honest, songs about drunkenness and bars and drinking.

One single song about 10,000 birds would flit in and out and you’d wonder if you’d heard the lyrics right. Same with the one about volcanos. Somewhere along the way Cassandra, yes that Cassandra, would tell you to fuck off with some raunchy lyrics.

There would be a brief snippet of the 1983 performance by the Moscow State Academy of Choreography at the Bolshoi Theater with a droning sousaphone. And a single cricket singing with all his might, from inside your ear canal. We would all understand the song about the beautiful teenager, of course.

And then when the needle hit the final groove in the vinyl and that thwp, thwp, thwp noise filled your speakers, you’d understand so much more about the world than before all this began.

All this to say: read The Best Small Fictions 2018. Listen to this Spotify list.

Sherrie Flick is the author of the novel Reconsidering Happiness and two short story collections, Whiskey, Etc. and Thank Your Lucky Stars (September 4, 2018, Autumn House Press). Her flash fiction has appeared in many anthologies and journals, including W.W. Norton’s Flash Fiction Forward, New Sudden Fiction, and New Micro, as well as Ploughshares, SmokeLong Quarterly, and Booth. She is series editor for The Best Small Fictions 2018.

0 replies on “IF MY BOOK: The Best Small Fictions 2018, Series Editor: Sherrie Flick”