Welcome to another installment of If My Book, the Monkeybicycle feature in which authors shed light on their recently released books by comparing them to weird things. This week Erika T. Wurth writes about her new novel, Buckskin Cocaine, published by Astrophil Press. 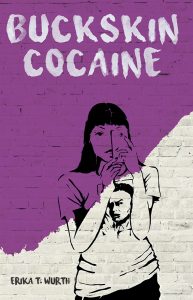 She’s not digital, she’s stock. But no less glossy, no less artificial. The harsh white lights are home, the sweet white clouds that fill your nose. She was with him when he drove that long black Mercedes into the wide red desert, the blonde angels in back, the ones who gave him that cloud, the ones who will watch him snort it and die.

She sits in Evangelos drinking something red and cheap watching him leave, and this is her time, her mise en scène. His father was a Road Man, but he knows how to make the images dance, make them lie. Lie to her.

Her mouth opens to laugh and the sound is something by Debussy. It’s always something French, something wet, like champagne. She watches the woman with the taste for celluloid who loved the man who lies, her hands hungry brown animals and they eat. Which hands are hungrier, she doesn’t know.

Each take is something new, something to sink into, to crash into, like glass, the want is everywhere. We are all stuck in the same time machine. But this one only goes backwards, and only into buckskin, into endless waving plains, into a thousand hows and headdresses, the kind that get you a belt buckle made out of diamonds that your LA girlfriend gives you, the kind the boys you love take at the party in Santa Fe where the dancer cuts her hand on a wine bottle.

Cut and start again. And this time, these images will make you rich. There won’t be a white person who doesn’t know your name, who doesn’t love you. But it’s always a jump cut, your love dying on the vine, your child at home in Oklahoma, the dancer stealing your friend, though even you always knew he was the one who lies.

Erika T. Wurth’s published works include a novel, Crazy Horse’s Girlfriend and two collections of poetry, Indian Trains and One Thousand Horses Out to Sea. Her collection of short stories, Buckskin Cocaine is forthcoming. A writer of both fiction and poetry, she teaches creative writing at Western Illinois University and has been a guest writer at the Institute of American Indian Arts. Her work has appeared or is forthcoming in numerous journals including Boulevard, Drunken Boat, The Writer’s Chronicle and South Dakota Review. She is represented by Peter Steinberg. She is Apache/Chickasaw/Cherokee and was raised outside of Denver. Find out more at erikatwurth.com or follow her on Twitter at @etwurth.

0 replies on “IF MY BOOK: Buckskin Cocaine, Erika T. Wurth”