Welcome to another installment of If My Book, the Monkeybicycle feature in which authors shed light on their recently released books by comparing them to weird things. This week Michael Parker writes about his latest story collection, Everything, Then and Since, just published by Bull City Press. 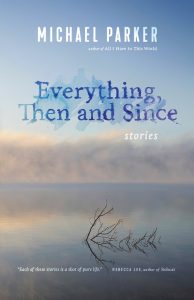 If Everything, Then and Since were a record, it would be a double album. Some cuts would be scratched from heavy play and others would bear the light track of needle upon groove. (Everybody’s bound to have their favorites.) Some of the songs would last less than a minute—instrumentals—and a reviewer would refer to these as “interstitial,” which the reader/listener would do best to ignore.

Because these songs would mention places—Norfolk, Raleigh, Asheville, Charleston, Baltimore, Richmond, Tallahassee, Spokane, Germany, Delaware, Nebraska, Central Texas, Philadelphia, Mexico, the Texas Panhandle, Houston, Baltimore (again), Phoenix, Tuba City, Arizona—the record clerks would want to stock it in the Country/Americana section, since the majority of the above places are rural, southern, or not New York or L.A or London. Also there are trains in the songs, and knives and guns. There is drinking and drugging and lost love. There is a quilt. There are live oaks, cypress trees and Spanish moss. Desert sand storms and the great American prairie. There are many rivers to cross. Ghosts, dreams, precious memories. Prison time and radio preaching.

But one subversive and slightly nerdy record clerk would argue that the record should be placed with the shoegaze, since he would hear, in these songs, reverb, feedback and distortion. He would be accustomed to being made fun of for his tendency to see beyond genre and his belief in hybrid form and the shunning of labels, on and off the clock. He would proclaim himself proudly bisexual and register Independent and one day he would show up dressed like a skater and the next a lumberjack and the next a thoughtless jock.

It’s just music, he would say about the record. No one would listen to him because no one ever listened to him, but he would not mind because he knew the record would end up in the cut out bin eventually. There he would one day find it, mixed in with the acid jazz and the delta blues and funk and soul and easy listening and trance and trip hop and electronica and dubstep and even a collection of polka. When he came upon it he would smile, having, in a way, gotten his way.

Michael Parker is the author of six novels—Hello Down There, Towns Without Rivers, Virginia Lovers, If You Want Me To Stay, The Watery Part of the World, and All I Have In This World—and two collections of stories, The Geographical Cure and Don’t Make Me Stop Now. His short fiction and nonfiction have appeared in various journals, including Five Points, The Georgia Review, The Southwest Review, Epoch, The Washington Post, The New York Times Magazine, Oxford American, Shenandoah, The Black Warrior Review, Trail Runner, Runner’s World, and Men’s Journal. He is the Vacc Distinguished Professor in the MFA Writing Program at the University of North Carolina at Greensboro and since 2009 has been on the faculty of the Warren Wilson Program for Writers. He lives in Greensboro, North Carolina and Austin, Texas. Find out more at michaelfparker.com.

0 replies on “IF MY BOOK: Everything, Then and Since by Michael Parker”