Welcome to another installment of If My Book, the Monkeybicycle feature in which authors shed light on their recently released books by comparing them to weird things. This week Douglas Light writes about his latest novel, Where Night Stops, out now from Rare Bird Books. 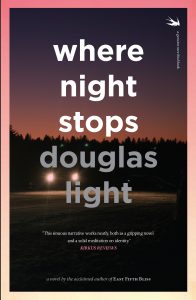 If Where Night Stops were the last meal of a Montana woman on death row it would be something light and refreshing, say miso soup and an iceberg lettuce salad with a hint of carrot ginger dressing—or no. It’d be something hearty and lasting—say chicken fried steak, green bean casserole with french fried onions sprinkled on top, a glass of whole milk, and two servings of bread pudding—a meal that’d sustain her as she makes her way from here to wherever it is we go when we die. None of the foods on the plate would touch. Each would be prepared with love.

If Where Night Stops were a dog it’d bark at the shadow of a plane passing overhead.

If Where Night Stops were the eulogy I gave at my father’s funeral, I would deliver it this time without halting sobs.

If Where Night Stops were a New York Times bestseller, that’d be fucking brilliant.

If Where Night Stops were a broken heart, it’d wander the rain-damp streets of Seattle without an umbrella, because an umbrella isn’t necessary in Seattle because it never truly rains in Seattle, not like it rains in New York City, Atlanta, Portland—both Oregon and Maine—Indianapolis, Miami, or New Orleans. And wandering the rain-damp streets of Seattle, my book as a broken heart would realize for the first time ever that love and hate are the same three chords, just played in a different order. A fact we all eventually learn.

0 replies on “IF MY BOOK: Where Night Stops, Douglas Light”