Like the orchestral music blaring through the speakers during the entirety of Bohumil Hrabal's Harlequin's Millions, the story is expertly wound together in a bittersweet melody. Maryska, a character who appears in previous Hrabal works 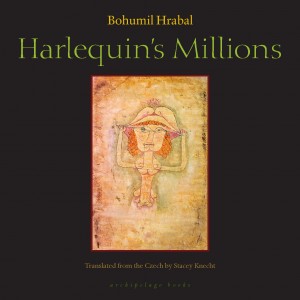 Like the orchestral music blaring through the speakers during the entirety of Bohumil Hrabal’s Harlequin’s Millions, the story is expertly wound together in a bittersweet melody. Maryska, a character who appears in previous Hrabal works, is now an elderly pensioner living in a retirement home, which used to be the castle of the now dead Count Špork. The halls of the castle once used to entertain noble guests, but are now dedicated to bedridden patients and many toothless pensioners. Maryska is accompanied in the castle home by her husband, Francin, a former brewery manager, and his older brother, Uncle Pepin, as she narrates a story that meanders through ruminations on her current situation and the memories of a life lived in the past. In classic Hrabal style, the story teeters constantly between the sadness of woebegone days and the humor his characters are always able to find even in the most melancholic circumstances. This ability is what makes Hrabal such a lasting literary figure.

With each new pluck of a string, Maryska’s perceptions of the castle and her own memories from the life lived in “the little town where time stood still” become sharper, forming a close narrative of a life worth knowing. She takes the reader on a tour of both the castle with its intricate and ornate frescos as well as her own life, which is flowered with keenly drawn characters, many of whom are also residents of the retirement home. The little town where time stood still appears in previous Hrabal works. It is not a city like Prague, which Maryska once craved to be a part of. No, it is a small, rural town not many miles from the capital city that acts as stand-in for the smattering of provincial towns that are scattered around the countryside. In a way, by being unidentified, Hrabal is able to supplant so many exquisite details and peculiarities onto it. A particular favorite is when Maryska is remembering certain residents of the town, each one possessing an even more absurd nickname than the previous. Briefly reminiscing about them, Maryska lists off Červinka the Gimp, who should not be confused with the numerous other Červinkas, including Červinka From Upstairs and Červinka the Cigar. Then there is my personal favorite, Dlabač the Rib Roast, “which he pronounced Wib Woast,” because of the inability to pronounce the letter R. The list goes on.

Maryska and her fellow residents are witnesses to old times, and it is no surprise that from the view from the castle one “could see the whole town laid before you, shrouded in mist, the deanery church towering in the rain like an old ship.” The elderly pensioners take the form of gatekeepers of a time past, and like the castle’s window, they, too, are able to view a sweeping chunk of the town’s recent memories.

Although their town is referred to as where time stands still, this of course is misleading. Time inevitably moves forward, and Maryska and the others have aged. The idea of remembering what has already come is ever-present in both Maryska’s mind and the mind of Hrabal. He has left Maryska in old age without teeth, even allowing her to smash her ill-fitting dentures, making them unusable. Hrabal has made her character elderly, but Maryska’s mind is concerned with her and Francin’s younger days, resulting in many memories spilling from her thoughts as she wanders around the castle, taking in the images of mythological creatures and smooth statues.

Appearances are also highly important to her, and vanity is certainly a theme. In her youth, Maryska was the proprietor of a short lived perfumery in Prague. Hocking lovely scents and powders to mask a person’s physical self is what Maryska so passionately, albeit briefly, wishes to do. Both the youthful Maryska and the retired Maryska seek to stand out from the rest. To open her perfumery, she is set on going to Prague and commits to six months’ worth of advance rent, but can’t help returning to the little town where time stood still. Even at the retirement home, she laments that many of the other pensioners are missing teeth, too, and Maryska rebels by not coloring her greying hair. Individuality is always out of reach for her.

“I suddenly felt disappointment. This was because I had always thought of myself as somewhat different from the rest, I wanted to be the only one who snuck out to the castle park, had a secret, did something forbidden, went from statue to statue, afraid
someone might see me.”

The castle cannot even be her own, but the memories she narrates are colored by her personality and Hrabal’s adroit storytelling.

Those readers who are familiar with Hrabal, an author touted in and outside of the Czech Republic as one of the great writers of the 20th Century, will relish in revisiting characters from his previous works, but new readers will have a fine introduction to the stylings of one of literature’s most noted writers. The English-language audience is only privy to a portion of Hrabal’s extensive oeuvre, and every new translation is a happy occasion. Translator Stacey Knecht preserves the seemingly endless sentences that sometimes run on for entire paragraphs. She gracefully renders the lilting prose, maintaining a lovely balance between the humor and somber rememberings of a time past. This blend has always been what draws readers to Hrabal’s works. He is able to find the jocosity in a situation even in the most dire of circumstances, and Harlequin’s Millions is no exception.

Ariell Cacciola is a writer whose work has appeared in the Brooklyn Rail, Words Without Borders, Publishers Weekly, amongst others, as well as in journals and anthologies in the US and abroad. She holds an MFA in Fiction from Columbia University and is finishing her first novel. She can be found at ariellcacciola.com and on Twitter at @ariellcacciola.