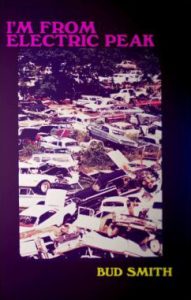 “I found out about reviews early on. They’re mostly written by sad men on bad afternoons. That’s probably why I’m less angry than some writers, who are so narcissistic they consider every line of every review, even a thoughtful one, as major treason.” —Barry Hannah

Whether this particular afternoon is bad or not, whether I am sad or happy, is my business and mine alone. Books are a fine distraction, and Bud Smith’s latest novella, I’m From Electric Peak, is more than mere diversion. So here is some treason. Smith has an ear and a mind dialed in to natural and beautiful ways of common speech; one might say he knows how real people talk, or at the very least how to make common speech resonate with the reader. In this seamless novella, we follow the path of a very young and sensitive murderer, Kody, who lambs it from New Jersey with Teal, the object of that quaint old obsession called love. Kody, no doubt prey to his past with a series of abusive foster parents and hard knocks in general, acts out his ethics by taking Teal away and showing her a tour of the United States, from motels near Vegas to a horse ranch in Montana, to a final electric showdown as he meets a type of justice.

After Teal’s parents force her into an abortion, Kody slays them in their house, leaving them for dead as he and his love flee through America, a country that is running out of room for ambitious young men, journeyers, explorers, even killers. Think of everything you’d ever hoped for—whether just or nefarious—and imagine the space around you, the space of possibilities shrinking and finally suffocating you and your plans. That’s how I see Smith’s latest work. And Kody’s world, at least the imagined world of America with vast plains, mountains stabbing the skies, wild horses, is shriveling with each and every encounter along the journey. From that ranch in Montana to the common stop at a grocery store, nothing seems large enough, looming enough for Kody. Ultimately, he is an ambitious young man, a teenager who, in spite of killing, possesses a deep ethical strain of his own. The tender scenes between himself and Teal, his relentless goodness towards her, draws in Smith’s readers and makes a near-hero of the gunslinging outlaw. And Kody still believes in the greatness of American space, of the potential this country sadly no longer offers him during the journey in the book.

Bud Smith’s sense of pace is terrific. I’m From Electric Peak moves at an alarming speed that fits that bursting-at-the-seams and shoot-from-the-hip plot that rushes to its end. Think of the movie Badlands for a sense of space within the book. I think that Bud Smith understands the harried and rushed times we live in and Kody, who eschews talk about Europe and foreign lands, is trying to impute meaning back into a country—again, America—that doesn’t reciprocate. While safe spaces abound on campuses today, it’s a dangerous space, or at least a challenging and invigorating space, that Kody desires that in the end, isn’t offered. Cameras, surveillance and the general sapping of vitality around him make Kody both killer and victim. I can imagine him placed in 19th century America, exploring it, robbing banks, etc. Teal and her reactions in the book are told through Kody’s words, he narrates her and recreates her at every pitfall and triumph throughout the book. Teal is a sort of Dulcinna or Beatrice to Kody, that archetypal—and mostly silent—female that takes on a life of her own through the narrator’s obsession and reverence for her.

Bud Smith has made a terrific book, under the surface of which lies a sharp political commentary on the nature of the United States, the human condition, the mystery of the heart. Judging him from his work, I’ve no doubt he’s little of a narcissist, but a committed and serious writer who can also grab laughs while on the road to hell. I’m From Electric Peak sounds how more and more books should: unpretentious, clear, good. Though America in fiction and real life shrinks and bores, it’s through our efforts to reinvigorate it, Smith seems to be saying, that we become (anti-) heroes, brave enough to take risks and dangers even though those actions might bring about our demise.

Raphael Maurice is a poet, translator and musician. He is an admirer of Southern literature, in particular, Walker Percy. The songs of Jason Molina shake him to his being. He currently resides in a small Missouri town where the river keeps its secrets. Find him on Twitter at @raphaelpmaurice.