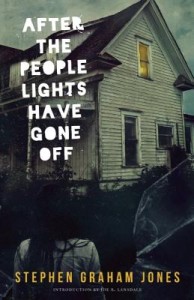 I had never read Stephen Graham Jones before and approaching his newest collection—an assemblage of previously published and new stories—was like showing up to a party that everyone else had already been invited to. He is trumpeted as a top horror writer in the English language, and a quick internet search showed loyalty from readers and other authors alike. It was a party I was more than happy to be invited to, albeit several years late.

However, as I read one story after another, a strange feeling began to grumble. When I finally put my finger on what was wrong, I realized I had clearly shown up way too sober to this party and everyone else must have been several cocktails in. I’m sure fans will relish in this new collection, which features hard-to-find stories matched with forgettable illustrations, but this reader was bewildered by most of the goings-on.

In short, I found the party rather dull. The characters are little more than muted shadows, and the promised horrors and creeping fears rarely show. Perhaps Jones is going for subtlety, but something has gone terribly wrong. His approach is one I normally admire in horror—taking an average, everyday object or occurrence and making it all so unnerving (I think also of the uncanny novels and short works of Stephen King, a writer Jones openly references and draws influence from). The step is never taken to make the mundane extraordinary; everything just sort of languishes there on the page.

One story, however, did startle this reader. “Welcome to the Reptile House” opens with the line: “It didn’t start the way you might think.” I had almost forgotten this bold opening until I got to that wowser moment later on. The narrator is trying his hand at the art of tattoo and practices on the dead bodies that lie, unmoving, in the funeral home where his friend works. He’s not an official apprentice, so the deceased will have to do. There is an enjoyable sense of humor in this piece, especially when the local newspaper reports about indecency against recent corpses.

“The blotter had nothing at all about the late-night involuntary tattoo on the owner’s car-wrecked niece—I guess I could have been famous, started a career right there—but it did mention how Saddleview was getting the funeral home version of an audit. Evidently, one month it had taken in more bodies than it had buried.”

The activities in the story are what I assume can be viewed as unorthodox (although, the likes of Six Feet Under have—in my mind—recast more sinister aspects of funeral homes as “quirky” and “delightfully ghoulish”). Yet, tattooing the dead is presented as completely normal and commonplace. I nod my head in agreement: yes, yes, of course one should practice on the dead; who else is there? This is to Jones’s credit. With this story, he elevates the initially average to honestly spook me by the story’s latter half.

The momentum garnered from this story is soon squandered. It picks up slightly in a second notable entry titled “The Spindly Man.” Although not as outright unnerving as “Welcome to the Reptile House,” it still possesses a bona fide eerie quality mixed with clever humor.

An ad hoc book group forms when one reader decides that she can’t read a certain Stephen King novel alone. The other readers join her for a discussion and to go “with her into those dark places,” but a mysterious member—the titular spindly man—shows up with a somewhat dubious invitation (the man seems to have a genuine flyer created for the book group meeting).

The spindly man is an antagonist, his purpose to unsettle the other characters and, in doing so, maybe do the same to the story’s reader. He is purposefully flamboyant and the only character to really settle in my mind. Instead of discussing the book—or not, as I’m convinced through no empirical data that book groups are more for general socializing—he aims questions at the members, resulting in them revealing complicated emotions and memories. The spindly man seems straight from a fairy tale; the original kind with less emphasis on fairies and more on the wicked characters who infiltrate the other characters’ lives. When he first joins the group, they try to catch him up:

“We were just talking about how if you admit devils,” Drake said, “then that means the door must be open for angels as well.”

“Or more demons,” the spindly man said, sitting back into his chair. “Inside every angel, there’s a demon waiting to claw out, right? But please, don’t let me interrupt.”

This story lifted away that dull, muddled feeling I had while reading the majority of the collection. If only the qualities that made these two so effective could be peppered through some of the others, this would have been a much more pleasurable read. Alas, as I struggled through the book, I kept asking, what does happen when the lights have gone off? Unfortunately, not much.

Ariell Cacciola is a writer whose work has appeared in the Brooklyn Rail, Words without Borders, and Publishers Weekly, amongst others, as well as in journals and anthologies in the U.S. and abroad. Along with holding an MFA in Fiction from Columbia University, she serves as the World Literature Editor for The Mantle and is finishing her first novel. She can be found at ariellcacciola.com and on Twitter at @ariellcacciola.

0 replies on “Book Review: After the People Lights Have Gone Off by Stephen Graham Jones”