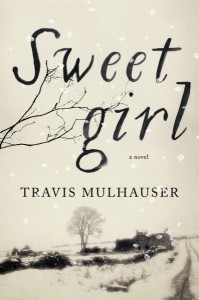 While desperately searching for her mother, Percy makes the singularly moral decision to snatch a sick baby from the house of a passed-out meth dealer. Attempting to get the baby to the hospital, she spends most of the novel scrambling through an apocalyptic blizzard. On her journey, she has only two supports: the distant example of her older sister who escaped to Oregon, and one of her mother’s alcoholic ex-boyfriends who also happens to be the closest thing she’s ever had to a father.

And while Percy is the center of the book, Mulhauser coaxes us into identifying with and caring for the most reprehensible of the downtrodden characters we encounter. One of the ways he works this magic is to switch from chapters told in first person by Percy, to those told in third person which track the meth dealer Shelton Potter after he wakes up and starts looking for the baby himself. Because Mulhauser is a master craftsman, the switch is so seamless and the cadences of the language so consistent, that our empathy extends before we realize it.

We come to feel so much for Percy because she feels so much for everyone else. From the first selfless act of taking the baby to finally confronting her drug-addicted mother, her fierce compassion extends to characters who can seemingly only act from their worst selves. Certainly, it burns even more brightly for the few lost souls who struggle to pick up the pieces of their lives and do what’s right. Like the unmoving leg of a compass, Percy’s emotional and moral grounding steadies the reader as events quickly spin out of control.

Mulhauser’s economy and plot compression –the book clocks in at a lean two hundred forty pages and the action spans only a few days—work together to raise Sweetgirl’s narrative to the level of myth. In a forgotten place, forgotten people struggle against their worst impulses and the power of nature itself. Like Shelley’s wretch, or the archetype he was based on, Milton’s Satan, these characters carry a hell inside of them. Does it consume them, prompting them to plunge into self-defeating narcissism? Or does the cold sting of pain wake in them an altruism that is something like salvation?

The magic of Mulhauser’s novel is that he explores both possibilities. And while at times the chaos that ensues is operatic, almost Greek in its scope, the heart of this book is a quieter revelation: we are not merely the sum of our misdeeds; all of us are more.

Richard Roundy is the poetry editor at Across the Margin. His poetry has appeared in Verse, Shiny, The Poker, & Insurance, among others; his fiction in Big Bridge. He was recently included in the anthology Like Musical Instruments: 83 Contemporary American Poets, edited by Larry Fagin and John Sarsgard, and his reviews have been published in Rain Taxi and most recently Entropy. He lives in Brooklyn with his wife, kids, and dog.