In an interview, George Singleton once had the following to say: “Unfortunately, I am my main characters, for better or worse.” Now, in his sixth collection of short stories, Between Wrecks, he leaves us with a cast of tough and tender characters, characters who quite often cope with their lives through drinking, smoking, and even more importantly, humor. With each story, I found myself not only admiring Singleton’s abilities as a writer, but wondering where or how I might meet such a figure, or given his statement, figures. 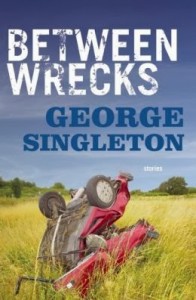 In an interview, George Singleton once had the following to say: “Unfortunately, I am my main characters, for better or worse.” Now, in his sixth collection of short stories, Between Wrecks, he leaves us with a cast of tough and tender characters, characters who quite often cope with their lives through drinking, smoking, and even more importantly, humor. With each story, I found myself not only admiring Singleton’s abilities as a writer, but wondering where or how I might meet such a figure, or given his statement, figures. Let’s agree to call this the Holden Caulfield litmus test. There are certain writers who, after we read them, we wouldn’t mind knowing in person. In Singleton’s case, both his craft and wit remind one of an avuncular figure telling us younger folks just how life works and how, quite often, it doesn’t. That the author is able to filter all the voices and stories around him, to write humorously and compassionately, that he really seems to feel and know the economy of bodies around him, testifies to something very close to love, if I might risk a sentimentalism.

The first story in the collection, “No Shade Ever,” begins with the following trouble: “Because I’d seen part of a documentary on gurus who slept on beds of nails, and because I’d tried to quit smoking before my wife came back home after leaving for nine months in order to birth our first child—though she would come back childless and say it was all a lie she made up in order to check into some kind of speech clinic up in Minnesota to lose her bilateral lisp—I had a dream of chairs and beds adorned entirely with ancient car cigarette lighters.” Right away we sense the great distances between man and wife, as the narrator cannot ignore this dream, and pushes the dream-work further and further, imagining he “was going to make 14.5 million dollars” by making these tobacco-friendly pieces of furniture. One of the struggles in the story is that of a man trying to find his economic moorings, as it were, in order to provide for his child and estranged wife, who winds up unable to provide even for himself. The narrator, who is getting his low-residency master’s degree in Southern Culture Studies, finds there is little to which he can apply his theoretical knowledge garnered at Ole Miss-Taylor. He is in some sense isolated from the everyday figures around him, due to a gulf between what he can describe and what should be happening. In a pensive mood, he gazes around the junkyard where he has come to buy those car cigarette lighters, and then wonders about Jesus’s death on the cross. The theme of the age of Christ crucified, along with the low-residency master’s program, are threads throughout the collection. As the narrator stands with the owner of the junkyard, sharing a bottle of bourbon, “No Shade Ever” concludes with a mysterious and lovely denouement: “I’d end up maudlin, remember too many songs that played back when my wife and I underwent rites of passage, then make some more promises to myself that I would never keep, and from which I’d never be able to escape.” The reader is reminded of a host of southern writers, Barry Hannah in particular, but the author of Between Wrecks has his own subtler and tenderer voice. Both authors possess a brilliant lyricism, but Singleton comes through as a bit more restrained and polished. And by all means, do decode the dedication page to Between Wrecks. I think you’ll know the four horseman of the literary apocalypse referred to by Singleton.

One of the many highlights of this collection is “Operation,” a story in which a social services worker checks in on the living conditions provided for an autistic boy by his uncle Cush. The autistic nephew listens to punk and Beethoven, reads Pynchon and Gaddis, and develops an extremely touching relationship with his unorthodox uncle, who nearly blows it in front of the functionary who’s come to observe both of them in their home. Singleton builds the tension between the DSS caseworker and the family unit composed of uncle and nephew by making Cush a character who cannot help proffering his idiosyncrasies at all the wrong moments, moments where we as readers do not want to see the household disrupted, for all its problems and what we might even call poverty. By story’s end, however, Cush and the DSS caseworker have, at least for an afternoon, become more than friends, ensuring that nephew and uncle will remain together. “Operation” comes as a temporary relief from other stories in the collection wherein the low-residency master’s student simply cannot reckon with the life around him. Singleton seems to love both the high and the low, and quite often it’s his “lower” characters who carry the day.

We can hear the voices in Singleton’s Between Wrecks, because they are voices we recognize regardless of our geographical constraints. We don’t need to be southerners—although this reader’s family is scattered from Mississippi to Louisiana—to get the sense that Singleton’s characters are real and true. The author has a terrific ear for everyday speech, and an eye that makes the everyday magical and authentic. I write this review from the belly of the Midwest, where the joke goes that a man loved his wife so much he nearly told her. Aside from making me want to return to my southern roots, Singleton’s great feat is creating a host of characters he seems to revere, for all their faults and grammatical missteps. He shows us how to be attentive to the voices around us. If Singleton is a combination of all his characters, he has also managed to listen and let the voices around him come to life. The reader is grateful Singleton can juggle so many figures and make them sing upon the page, and I cannot recommend Between Wrecks highly enough.

Raphael Maurice is a reader & poet who lives in St. Louis with Jill, his wife and comrade. You can find him on Twitter @RaphaelPMaurice.

0 replies on “Book Review: Between Wrecks by George Singleton”