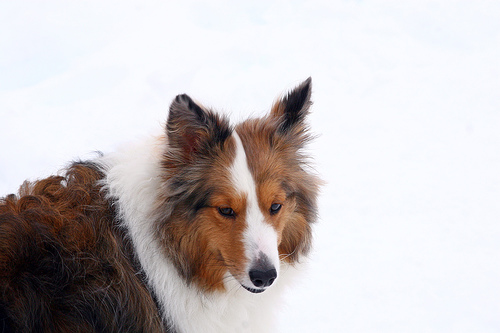 I’ll always remember that winter, not because of Mama’s accident with her colostomy bag, or the wad of chewed up leaves and puke I found in the corner of the dope shed, or the bitter cold—and it was cold, so cold the puddle of vomit had frozen at the edges like a sour new flavor of Ben & Jerry’s—but because of Buddy’s disappearance. That was the last time I saw him, January sometime, standing up to his belly in snow and howling at me like he’d just been kicked in his empty nutsack.

Since I was a kid I’d been closer to Buddy than the older collies, this scrawny runt who looked like he couldn’t stand up to piss. Even now, midway through my twenties, I’m struggling to make five and a half feet. So when Buddy slithered out of old Trixie, the seventh of seven, and started raising hell before he could even ungum his eyes, I knew I had a new brother in the home, one who wouldn’t pin me down and let rip in my face when Mama wasn’t looking. Norm had moved out by then anyways, and Darryl was fixing to do the same. Time for us runts to rule the roost.

That was before the cancer took her. I was barely twenty the day she told me, still jerking off in my socks and imagining the world was my oyster, not some piece-of-crap rock I happened to spring into existence on. Mama just let it slip out like something she’d heard on the news, while me and Buddy were working on the bust-up Farmall out in the yard. None of us knew what it meant then, not really. We knew it was bad, but until you’ve been there it’s just another word, albeit a gnarly black one. You don’t know what it means until you’ve watched your family wither and drop in front of you.

By the time Buddy disappeared she was already a ways down that path. It was because of the cancer that we’d started the Crystal Rain plants in the old cattle barn. Saved me freezing my ass off in the parking lot behind Slumber City, trying to score a baggie from some acne-scarred kingpin wannabe. This way she had more than enough dope to keep the cancer mute, and the tween drug lords had to come to us for their merch. There were risks—there always are—but with dipshit Wayne Johnston being the only cop in town I wasn’t too concerned. The ’tard couldn’t even sign his name in school. I figured we were home free.

Norm had visited that afternoon, and we’d argued about it, as always. Something he saw on TV flicked a switch in that slow brain of his.

“Y’know, if you want that shit for Mama I have friends can get it for you. You don’t need to be growing it right here under her nose.” He scratched the back of his neck, his hand barely wrapping round that big hunk of meat. “They find you doing that, they’re gonna put you both away, cancer or not.”

I did my best to scowl, but I was already tuning out. “And then what? The barn’s her supply, so you won’t have to pimp your fat ass out in parking lots to pay for the hospital. Plus there’s enough left over for the farm to turn a profit. I know you were never big on math, but even you can do the sums.”

Norm snorted like a truffling pig when I mentioned the farm. “This hasn’t been a farm since Pops died, and you know it. Just ’cos you got a barn, doesn’t make you a farm.”

We’d been over this two hundred times already, so I just yawned.

“What you got growing in that shed is a warrant waiting to drop, and me and Darryl won’t be able to bail your scrawny butt out of that one. Then who’s Mama gonna turn to? When they repossess this land, where’s she gonna stay?”

I’ll say one thing for Norm, he always knew how to push my buttons. The farm had been in our family for five generations, and its importance was the one thing Pops had instilled in us before his liver finally collapsed in the middle of a whiskey bender, the barman finding his body next to a dumpster the morning after. Our great-gramps had built the farm from a little starter money, a pocketful of seeds, and a pair of Scotch collie pups. That’s the way the family legend went, anyways. Now that Norm and Darryl had gone, I couldn’t help but feel some of that weight on me.

It was after Norm’s truck pulled away up the track, the chains hissing through the snow, that I checked the barn and found the puke. The inner tent was warm and humid, the plants sweating out the winter in their own tropical resort, but the puddle was outside, near the doors. I didn’t need a forensic team to tell me it was Buddy’s. He’d made a habit of sneaking into the barn and helping himself to the crop, chewing a mouthful of sticky buds like some crusty old shortstop, until I caught him and made him spit out. One time he’d chewed so long that he ended up chasing his tail the rest of the afternoon, howling at it like he’d just caught a snake. I knew to look out for it now, but I guess Norm’s visit had kept me distracted.

I swore as I pushed back out into the snow, my curses crackling in the frozen air. He wouldn’t normally have gone out in weather like this, but if he was still riding a high then who knew what the crazy mutt might do.

The tracks were easy enough to find, a weaving trail of pawprints in the snow. He was barely walking straight, and there were new flecks of puke from time to time, but that trail just kept going and going. It took me less than a minute to work out that he was heading for the road, probably following some ghost of a memory out there, a phantom of our summer hikes into town, the late-night staggers home from Ernie’s.

“Stupid son of a bitch,” I muttered, stamping my feet harder to loosen the compacted snow.

As it turned out, I didn’t have to reach the road to see the flashing red and blue, the lights of Wayne Johnston’s cop car puncturing the white blanket of winter like a beacon. I sped up as best I could, and as I drew near I could see Buddy tied to the front fender, his body still heaving as he tried to shelter under the car, steam wisping from his flanks. He looked cold, but still wired, his head jerking in irregular spasms as if someone kept tugging on his collar.

I didn’t see Wayne at first, but he stepped around the side of the car as I shuffled closer, his chest puffing out even through his winter jacket. The prick was loving this.

“Found this dog here, running circles in the road. You know anything about that?”

I pulled my hood down, the cold air hitting my face like a freezer door. “You know that’s Buddy, Wayne. You see him with me all the time. He just got loose is all, there’s no harm in that. He did more damage to himself, being out in the cold like this.”

Wayne shook his head slow, and before he even said it I could tell the way his mind was working, the petty payback for the years that me, Norm and Dwayne put him down, or beat on him. What with the swirling snow, and the white of the fields, and the piercing flashes of light, I could almost feel the world sliding away beneath me.

“He was walking real funny, you know. Snapping at me, growling, frothing at the mouth. Could hardly stand straight for all that leaping and howling. Now, to me that says he’s gone crazy. Unless you know otherwise of course. You have any other explanation for his behaviour? Or do we put him down? It’s your call.”

And I knew then that they wouldn’t call the doc, not on a day like this. Wayne’s gun was already loose in its holster as I tried to do the calculations in my head, weighing Buddy’s life against my mother’s cancer, him lying dead in a snowdrift against the end of the farm. But none of it made any sense, and there wasn’t any story that finished any way other than something dying out there in the dark and the cold.

Dan Coxon is the author of Ka Mate: Travels in New Zealand, and the editor of London-based literary magazine Litro. He currently lives on the outskirts of London, having tarried for several years in the Pacific Northwest. His writing has appeared in Salon, The Portland Review, Connotation Press, Gutter, The Weeklings, The Nervous Breakdown, Spartan, and the anthology Daddy Cool. Find more of his writing at www.dancoxon.com, or follow him on Twitter @DanCoxonAuthor.