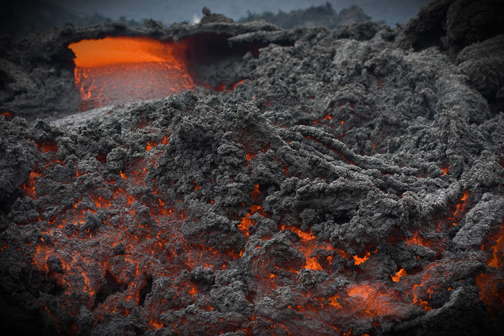 Tall Man and his wife lived at the base of the volcano. The volcano’s name was Aiiw. Aiiw had long been sleeping.

Tall Man was a fisherman at one time and after that he had been a chief but now he was neither.

Now his legs are perpetually crumpled beneath him and he spends the days sitting in his wife’s garden.

Tall Man’s wife says, “Tall Man, let your sons take you down to the water. You can fish from the pier.”

“A pier isn’t a boat,” Tall Man says to his foolish wife.

He puts his back to Aiiw and stares beyond his wife’s garden, beyond the village, beyond the sea. He breathes but he does not live. At night, Tall Man’s wife takes him inside and feeds him from her garden and puts him to bed. And then he lies under his blanket and stares at the rafters of the house he built when he was young.

Tall Man was young once. More than once.

In the daylight, Tall Man’s wife puts a knife in his hand and gives him a piece of driftwood and says, “Carve.”

“Whatever is inside you, Tall Man.”

Tall Man lets the knife and the wood lay still in his useless lap. He ignores the objects. He pretends he cannot feel their weight. Pretends he cannot see them. He tries to stare beyond the garden.

He tries to stare at the rafters.

The man grows angry. His routine has been interrupted.

Tall Man’s wife works in the garden. She has taken to staring now but she directs her attention, instead, at Aiiw.

Tall Man’s wife feels Aiiw tremble under her hands. Under the cabbage.

Aiiw trembles and then is quiet.

Tall Man’s wife looks to Tall Man who pretends to stare beyond the garden.

Tall Man’s wife climbs and climbs. She winds around Aiiw, circling its heart as she ascends the mountain.

Occasionally she pauses to stare. At the garden, at the village, at the sea.

When Tall Man’s wife reaches the peak of the mountain she stops. She stares for a while at the sky. There is no more up. She turns away from the garden, the village, the sea, and looks down into the beating heart of Aiiw.

Aiiw sputters and spouts. Red stars shoot from within and land at the feet of Tall Man’s wife.

She picks up a glowing star.

She holds the still-warm star to her chest.

When Tall Man’s wife descends the mountain it is dark. The moon shines but Tall Man remains in the garden.

He says to his wife, “What ever became of me?”

Tall Man’s wife slides the star into her pocket.

“You lost yourself,” she says.

She looks at Tall Man’s useless lap. One hand is curled around a knife, the other a carving.

Tall Man holds the carving out to her. The moon illuminates its white surface.

“You carved a fish,” she says.

But, the more she looks, the more Tall Man’s wife realizes that the driftwood piece has not been worked. It naturally resembles a fish. He has done no carving at all. She wonders how she had not noticed the fish shape before.

Tall Man shakes his head, “The sea carved it.”

He hands the knife to his wife. She takes him inside and feeds him from her garden and puts him to bed.

Tall Man, lying in bed, runs a finger over the smooth surface of the fish as he stares at the rafters.

His wife, at the kitchen table, runs a finger over the dimpled surface of the star as she stares beyond the sky.

The volcano trembles and Tall Man’s wife whispers, “Are you waking, Aiiw?”

AshleyRose Sullivan is the author of Awesome Jones: A Superhero Fairy Tale, available from Seventh Star Press in April. She lives, writes, and paints in Los Angeles with her husband and their many imaginary friends. She can be found at ashleyrosesullivan.com.

Fiction
Previous PostLiving in the Countryside
Next PostAt the Brewster Arms