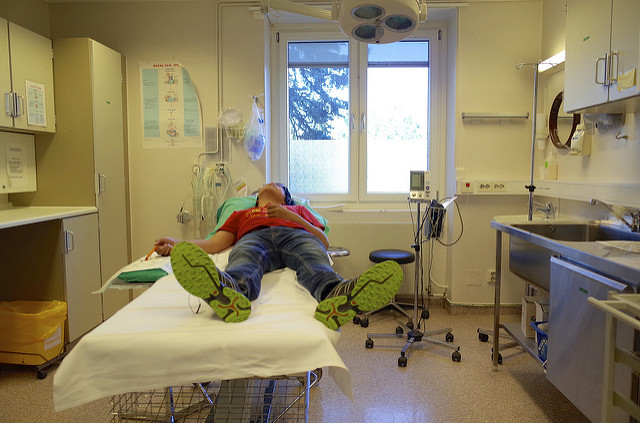 At 3:17 pm EST Ben McKinnon walked into the Emergency Room at County Hospital and announced that, in eight to twelve hours, he would die.

The staff at County were used to people walking in from the street and hollering tidings of their own impending doom, but not with such unnerving calm, or with a total lack of apparent symptoms. McKinnon spoke simply and patiently to the triage nurse. “I’ve taken 50 mg of colchicine,” he said. “Over ten hours ago. Too late for you to do anything, and I’d rather you didn’t try, but I would like some morphine later on.” He produced the empty bottles as proof, handing them over in a neatly folded white paper bag.

“Okay,” she said. She passed the message to Vasquez, the resident on duty, and paged social work.

Dr. Nick Vasquez wasn’t exactly a veteran of the Emergency Room, but after just two years there he’d seen plenty of suicide attempts. There were the people who had eaten bottles of Aspirin and come in once their ears had begun to ring, saying they’d changed their minds, they wanted to live. Then there were those brought in by paramedics, middle-aged men who’d shot the roofs of their own mouths off, faceless patients rushed to often-useless surgeries before ending up vegetating in critical care. These latter cases, he’d felt, were the worst. He wasn’t one of those doctors who scoffed at the teenagers who came in scared and sad after taking four over-the-counter Tylenol pills—one of those doctors who said, don’t waste our time, come back when you’re serious about killing yourself. But when putting an artificial airway in a man whose self-inflicted facial wreckage was so complete that the next step was a CT scan to see if he even had a full brain stem still, Vasquez struggled. Even after all of his training, part of him occasionally wondered whether people knew what they were doing when they pulled the trigger, and maybe should be allowed to do it. This part would rise unbidden in his consciousness, along with an acute awareness of how much time they spent on someone whose quality of life wouldn’t, after this, be anything Nick would wish on his worst enemy. Do no harm, do no harm, do no harm he’d repeat in his head while restraining limbs and pumping stomachs. He couldn’t tell if the mantra was comforting or ironic. Give me a car accident or a homicide attempt any day, he thought. But not another old guy with half of his face gone.

Vasquez had never seen this, though. Never an overdose without symptoms or agitation—not vomiting, not afraid, not pale or restless. Ben McKinnon looked fine. He lay quietly on the bed, his wrists hanging easily in the Velcro restraints. Nick felt almost embarrassed by the mandatory protocol. Around them, Emergency Room chaos raged; urine pooled under the triage bay curtain, but McKinnon remained calm.

Colchicine was a weird choice, something else Nick had never seen before. He called Toxicology. Through the partially-open curtain, he could see McKinnon’s bed, a security guard, and the medical assistant who was checking McKinnon’s pulses. Nick turned the empty bottles over in his hands while the line rang. Each bottle had been prescribed by a different provider. Colchicine was a common drug for gout—an old medicine for an old disease, not generally considered dangerous, but definitely toxic in large doses. About fifty milligrams in all, he realized, adding the pills up in his head. Jesus, he thought. That’s a lot of colchicine. The toxicologist at the other end of the hospital picked up on the sixth ring.

“Hey,” Nick said. “We’ve got a thirty-eight-year-old white male down here who says he took 50 mg of colchicine about ten hours ago.”

The medical assistant tried to catch his eye from across the hallway, an odd look on her face. “Nick.” The Emergency Room din muffled her words, but her mouth clearly shaped his name.

“50 mg of colchicine? Ten hours ago?” There was a pause on the line. “Nothing you can do,” the toxicologist said.

“Nothing?” Nick peered up at the fluorescent-lit ceiling. He found it helpful to stare at the lights when he was upset. He had two years of memories, now, of those parallel lines of cost-effective, faintly buzzing brilliance, associated with the kinds of situations he couldn’t have imagined while studying for the MCAT, and with trying to burn out his own more hopeless thoughts.

“You can’t pump his stomach—it metabolized in an hour. You can’t give him charcoal. You can’t dialyze it out of him. There’s nothing you can do.”

“Nick,” the medical assistant mouthed at him. She was still standing over McKinnon, and she had her hand on something clipped to his belt, a white rectangular card.

“There must be something.”

“There isn’t. He’s got—it’s been ten hours since he took it? He’s got another twelve hours before his organs shut down. He’ll start vomiting in four.”

“Nick,” the medical assistant said one more time. She had left the bedside and come over to his workstation, and now held up an identification badge: Ben McKinnon, MD, Toxicology Department.

“Thank you,” Nick said into the phone. “You’ve been very helpful.” And then he hung up.

Nick sat for a few moments, then stood slowly, aware of a high whine in his head. He looked down at his own scrub-clad legs and stained sneakers, told himself to bounce on his toes as he usually did to center himself, but didn’t move. He could feel the weight of his own badge clipped to his pocket, a slight ache in the small of his back. Nearby another phone rang. On the other side of the triage bay, someone’s lungs vibrated with a deep, hacking cough. Ben McKinnon, toxicologist, had eight to twelve hours to live. And Nick Vasquez, Emergency Department resident, had the short distance between his desk and McKinnon’s bed to figure out what he’d say to this patient who was also a provider. To a person who he would think about, but never talk about, in his own dark moments for years to come. To a man who had used his training to commit such harm.

“I’m going to order morphine,” he said out loud to no one, his voice clearer than it had been all day.

Margaret Adams’ stories and essays have appeared in Joyland Magazine, The Pinch Journal, Monkeybicycle, and The Baltimore Review, among other publications. She won the Pacifica Literary Review 2017 Fiction Contest and was a Finalist for the 2017 Glimmer Train Very Short Story Award. She is an associate fiction editor for JMWW. She currently lives on the AZ/NM border in the Navajo Nation, where she works as a nurse practitioner. Her website is www.margaret-adams.com. Follow her on Twitter at @megbeingthere.