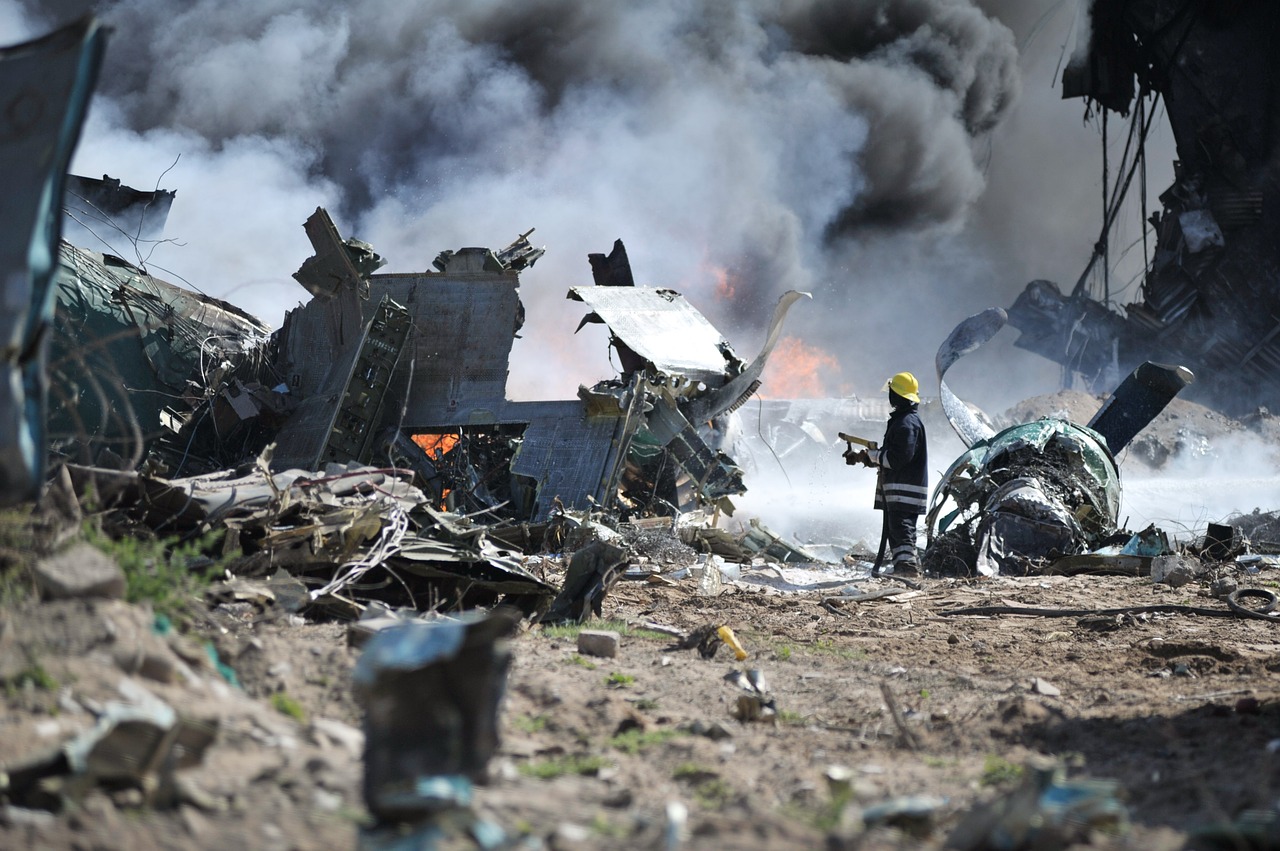 Find in the wreckage these gifts: a die-cast car, a snow globe stamped with the name of the city I was leaving, cheap lettering smudged. The girl in duty-free wrapped them for me, so find nearby this tissue and ribbon.

Ignore my wedding rings, which might just as well be tin, and whatever other things I had with me. My body oil and perfumes, the delicate glass of the bottles smashed and glittering in the sand and grass of the cool green hills below. Shirts and shoes and pants from a hundred plus people, that floated down or came violently down—I don’t know, honestly, at this point—lay on the ground flattened and empty, mixed up versions of all of us.

The passenger on my right—her cough a wicked, ticking secondhand the whole however many minutes of the ride—moved my bag with her foot, stepping on the edge and probably crushing my tube of toothpaste or the gold filigree of a pair of earrings. I had no time to hate her properly.

The older man on my left did not use his armrest and offered me his still-sealed blanket and said, “you can look out my window if you want, I don’t mind.” When things started to happen, he smiled and patted the back of my hand. His skin was cool and dry and holy.

“Can I tell you a story?” He asked. “Won’t take but a minute.” Though what he said was the start of a prayer. A well-known one. He drifted into another language, his voice like lace. God, the circles and curves of it. “I loved my wife,” I knew he was saying, I knew he meant to say. “But I don’t know that I ever loved her enough. My children, though.” Then the pressure changed, turning my head cottony. I lost him for a second. He was fuzzed up and far away and I couldn’t understand but then he came back, clear. “My children, they surprised me every day. And that’s what you want, isn’t it? Nothing’s better than a pleasant surprise.” That static again. It kept stopping him. I tried to ask him to speak up. I tried, but the noise. “Did you know,” he asked, “that the bones of the ear are the smallest in the human body?” He nodded, slowly. “And did you know that the sun rises in the east and sets in the west? That you can’t hum and swallow at the same time? That the human uterus is the size of a fist?”

“What else?” I asked. I just wanted him to keep talking. I couldn’t think of a thing.

“After almost a year of gestating, a foal is born.” He leaned a little closer. “Twin foals are very rare. In the case of twins, breeders are urged to crush one embryo by hand.”

“Something different,” I said. “Please.” The electricity of panic around us. One long lurch. A constant banging somewhere. The lines near his eyes were golden. I had chosen a flight that departed at sunset.

He started in on fjords. The mossy-soft look of them. “Carved by glaciers,” he said. His voice was raised; it had to be. “An inlet with walls.”

“Isn’t that something,” I said. Inside me, upheaval.

He looked out the window and then back. He drummed his fingers on his tray. They were thin, becoming blue-tipped. ’’I’m going to count down, now, my dear,” he said.

I was so close to buying the better snow globe—the one with the real glass—but, no. Not for a four-year-old who throws things. That’s fine. Buy him something else. Buy him a million things. But keep him from the news. Remove from his room that jet we built, the intricate one with the stickers and the small, suited pilots. Remove, too, just because, the plastic stars from his ceiling. Paint his walls. Keep him close to home.

Please listen to this: My pulse pounded the whole time and I said the letters of my little boy’s name—the long, ripe vowels, lush and smooth, with room enough for rain forests, for buried treasures, for city blocks with wide boulevards. I mouthed them over and over until I didn’t.

Vanessa Cuti’s fiction has appeared in The Kenyon Review, Beloit Fiction Journal, Word Riot, The Southampton Review, Hobart, and others. She received her MFA from Stony Brook University and lives in the suburbs of New York with her family. Find her on Twitter at @vanessajcuti.