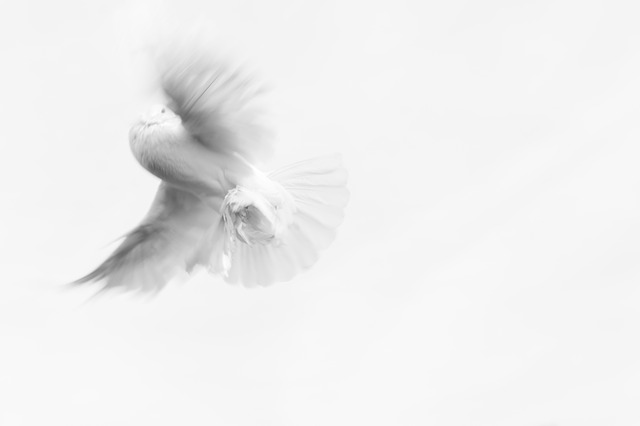 The Flail Building is scheduled to be torn down in three months. Preservationists are still circulating petitions to save it, because the building is a minor work by a major architect. But things don’t look good. Neither does the Flail Building, in truth, except to the sort of hipster aesthete who likes buildings so ugly that they actually transcend their physical incarnations to become pure form: ugliness itself. Also the mourning dove, who lives with his mate on a ledge outside the twenty-second floor, likes the building. For nesting purposes, nothing beats the curved concrete projections beneath each of the myriad narrow windows, causing the façade, when viewed from a distance, to resemble an alligator’s back. The dove also enjoys the updrafts that rise from the urban canyon and catapult him high over the building’s roof as he heads out to gather twigs in the park.

The dove has chosen to nest outside the only floor of the building that is still occupied, by the (as of today) thirty-two employees of the Shoal Corporation. He has selected the window next to the cubicle of Byron Pye, Associate Director of Human Resources, in charge of new employee orientations and (much more frequently these days) exit interviews. Of course the dove doesn’t understand the substance of these interviews. But he knows how quickly arrival can turn into departure. Last year, on what should have been a joyous if bittersweet occasion, he and his mate lost both of their offspring. It had come time for their first flight. But instead of gazing out over lush green treetops or suburban roofs, the fledglings stared into a concrete abyss whose swirling updrafts felt like the exhalations of death. Seized with terror, they lost the hardwired instinct to flap their wings, and fell like paperweights thrown from the office window.

Now it’s time to try for a new family. The dove is cautiously optimistic. By clearly demonstrating to the new fledglings the unparalleled joy that flying through the city brings him, he can make sure they don’t meet the same fate as their predecessors. But his mate doesn’t want another brood. She senses the catastrophe yet to come. She sits like a paperweight on the nest he’s still building.

Meanwhile, less than three feet away, Byron Pye rises from his desk. His shoulders prematurely stoop; his trousers bag over his nonexistent rump. The back of his white shirt is ribbed with creases like an alligator’s belly. He offers a hand, then a chair, then he types as another soon-to-be-ex-employee hems and haws and finally blurts out:

This company, this building, this city—they’re all dying. Why don’t you leave, Byron? You can do better than this. You’re young. You’re good.

Byron shakes his head. I’m not good, he says.

Who knows how, but the dove understands the gist of this conversation perfectly. Possessed by an urgency he hasn’t felt in months, he turns and taps his beak on the glass: one, two, three. Byron tilts his head toward the window but does not look at the dove. Looking at the dove would wreck the extraordinarily delicate thing that is coming into being in the narrow space of the window pane, and the dove understands this, too. He taps again and again.

Byron’s stoop subtly straightens. He breathes on his glasses and quickly cleans them with the tip of his tie. He picks up the phone to call in his next appointment as the mourning dove taps out the message that Byron is receiving:

Ann Gelder’s first novel, Bigfoot and the Baby, was published by Bona Fide Books in 2014. Her fiction has appeared in Alaska Quarterly Review, Crazyhorse, Flavorwire, and elsewhere. She tweets at @AnnBGelder.