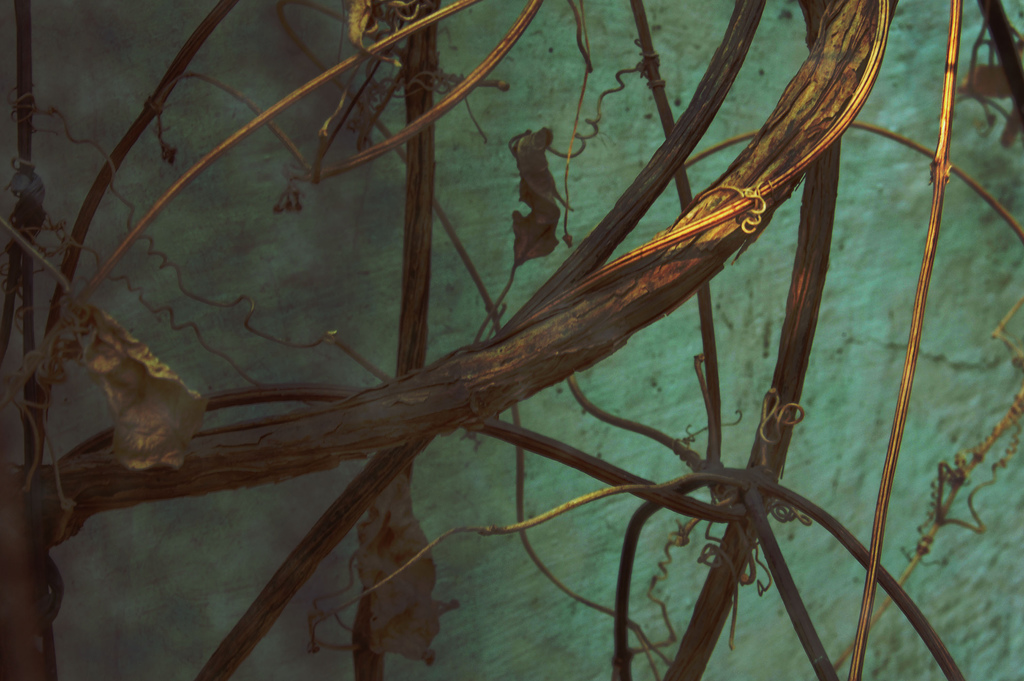 The garden was already there when Fern moved in, small but splendid, perhaps even too perfectly cultivated by the previous owner, who had departed rather abruptly, the neighbors said, for Canada. At her housewarming party, Fern admired the counterpoint the woman had orchestrated around the backyard—pink rhododendrons and blue hydrangeas, yellow roses and red azaleas—but noted sadly that the beauty wouldn’t last long now that she was there to spoil it. The neighbors assumed she was joking. Gardening wasn’t that hard.

It took a few years for the nettles to slink in, a few more for the ivy to throttle the taller perennials. Fern kept the front of the house in check: she mowed the lawn, weeded the hostas beneath the picture window, and lopped off any branches that strayed beyond her property line. Every spring, she made plans to clean up the back as well. But every fall, she studied it with regret, grateful for the slatted fence that screened the burgeoning chaos from passersby. The fence let her keep her failings private, like unwashed hair tucked under a wide-brimmed hat.

Reader, you may wonder: did Fern truly conceal her garden so well? Did she never have guests, never hold a cookout? She did, that first summer, when it was still fetching. Two picnics, in fact. And the second summer, when it had grown only slightly ragged. After that, as the weeds amassed, she forgot. And by the time a decade had passed, her guests would have needed machetes to hack in past the spiny thorn bushes spanning the lot and colossal thistles tickling the rooftop. (A decade, I hear you murmur. Such growth seems rather…accelerated. Indeed, dear reader, indeed.)

How Fern envied Patience and Peter Greenly across the street, whose garden yielded elegant dahlias, fresh cucumbers, and cleverly spaced bonsai. In the back, a koi pond sparkled next to a bamboo gazebo shading two delicious benches. Patience and Peter weeded and watered their plot at all hours, and Fern knew she would not—could not—do the same. Yet, she also knew she could do—should do—better than she had, and that the intractable bramble behind her gate should never have come to be.

She bought pruning shears. She bought a trowel. She bought work gloves and a rake. She opened the gate. She snipped for a minute, and another, and then went in to take her Saturday afternoon coffee break, neglecting to close the barrier behind her. While she sipped her café au lait, her sister called, and when they hung up, the evening news beckoned, and the day was gone. The next morning, when Fern went out to resume her work, she discovered the thistles and thorns reaching out to her, spiky green arms exceeding their former bounds by six feet or more. She put on her gloves, grabbed her shears, and strove to sever the new growth, but the stalks were already thick as thigh bones, impossible to amputate. She began at the tips and clipped forward, sweating and blistering, until she carved the limbs back far enough to let her shove the gate shut.

Well, you may be thinking, time to hire a gardening service. That would have been prudent. But Fern was ashamed, and unwilling to let anyone, professional or otherwise, see how far she had let things go. She felt it had to be her secret.

That doesn’t mean she gave up, though. If you are cheering for her now, reader, impressed by her determination, please stop. Fern should have given up. She should have moved away and started over, like the wise but exhausted woman who sold her that house. Instead, she purchased many, many gallons of herbicide, and a sprayer with a very, very long hose. She put on her gloves, slipped inside the gate, and launched her poison. When the sprayer emptied, she refilled it, again and again, until she had used every gallon up. The next day, she hoped, the weeds she had showered would be gone and she could step farther into the yard to attack their kin.

When she woke at dawn, it seemed she had succeeded. Humming, envisioning a backyard stripped to mud, she rushed to the market to restock and was home to load her weapon before the sun was fully up. Once she had vanquished her enemy, she decided, she would pave the space over with marble and limestone. In the summer, she would decorate that new patio with clay pots that held delicate flowers captive inside. In the winter, she would layer it with ice and hold skating parties. It would all belong to her again.

She crept into the area she had cleared and aimed her toxins to the right, to the left, straight ahead, and around, looking up at the nettles looming above, keen to see them shrivel. It wasn’t until she heard the gate slam that she glanced down at the ivy entwining her ankles, and felt the yank that pulled her under.

It was quite some time before the authorities declared Fern legally dead. As the years passed, the neighbors hardly noticed the moss scaling her walls or the hedge roots prying apart the structure that had once been her home. There’s a little park there now. Not the best place for walking small dogs.

I’m telling you this for a reason, reader. I’ve seen where you’ve stashed your own wee flaw. I watch it fatten by the day. Seize it. Uproot it now. Or it will weave its way in and gnarl you away.

Danielle LaVaque-Manty is a freelance editor living in Ann Arbor, Michigan. Her fiction has appeared in Glimmer Train, Sou’wester, The Pinch, The Baltimore Review, and New Delta Review, and is forthcoming in Bayou Magazine. Find her online at daniellelavaquemanty.com, or follow her on Twitter at @dlavaque.

Fiction
Previous PostSemele Burning, or: How to Love Someone Who is Uncertain
Next PostIF MY BOOK: There’s So Much They Haven’t Told You by Michelle Ross