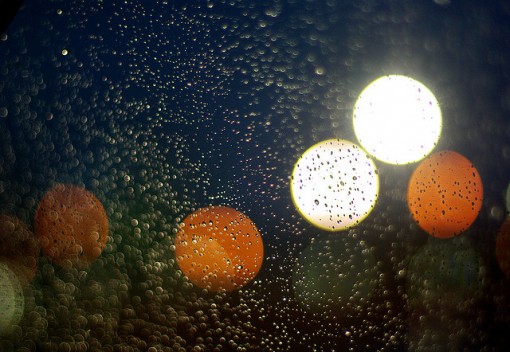 You barely noticed the man waving his arms on the side of the road until you passed him. It was dark and rain drops collapsed on your window faster than your wipers could heave to erase them. You strained to train your eyes on the single white line that bordered your path.

“Go back,” you wife insisted. You considered the hour, your child asleep in the backseat. You considered how fast a man in wet clothes could become hypothermic and how many good deeds you had accomplished that day. You nearly hit a boulder on the opposite shoulder while turning the truck around.

Your wife called to the man now inside his car, “What’s wrong? Do you need help?”

You had four-wheel drive and a tow rope. You could do it in less than five minutes. You took another look at your daughter, the way her mouth fell open when she slept, just like her mother. Outside, the rain quickly dampened your t-shirt. You called to the man as you hooked the tow rope to his car and then to your own, “When you feel the pull, gas it.”

Your truck wavered over the wet pavement sliding tenuously toward the muddy shoulder until you felt the final jerk that set his car free.

He was grateful, too grateful perhaps. He slurred his thanks. You refused his money and the remains of a six pack sitting beside him in the passenger seat. Waving him ahead, you watched his tail lights swerve across the yellow lines as he headed over the mountain pass.

Back inside the warmth of your truck, the windows steamed over, the wipers still beating their rhythmic trance, you turned to your wife. She had been watching, waiting to ask you, “What have we done?”

Johanna DeBiase is the author of the forthcoming fabulist novella Mama & the Hungry Hole (Wordcraft of Oregon, 2015). Her fiction has appeared in Portland Review, theNewerYork, Gravel, Convergence, Prick of the Spindle, Melusine, and San Antonio Current among others. She lives in Taos, New Mexico with her one husband, one child and one dog. Visit her website at www.JohannaDeBiase.com or follow her on Twitter @JohannaDeBiase.