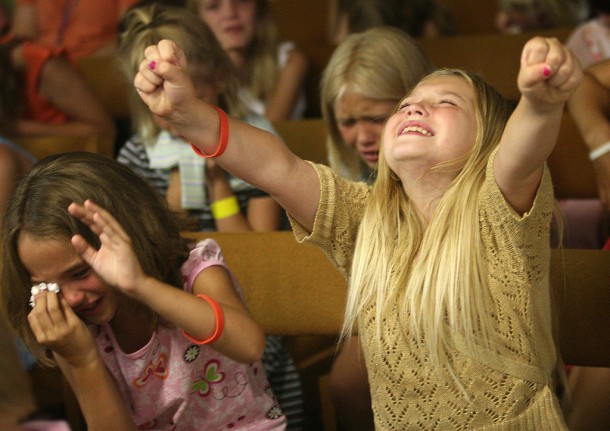 A great deal of my childhood was focused on Scripture memorization. It’s the sword of the Spirit, after all! There was Sunday school on…well…Sunday and Awana on Wednesday—where we wore vests and sashes like the Boy Scouts and Girl Scouts of America, but instead of earning badges for building a fire or crafting an angel from a found pine cone, we earned crowns in heaven for reciting the Holy Word! Then, come summertime, there was nothing on the brain but Bible camp. My church printed “Scripture Memory Challenge” booklets for anyone wishing and/or being forced to attend Pine Valley Bible Camp* and assigned us “Listeners,” adults who would meticulously follow along in the booklet as we recited each verse. This was no walk in the park. Each passage was a good page to two pages in length, set in 9pt font. The only way I got through it was that I was bribed heavily with Fruit Stripe gum and Fun Dip my Listener had purchased that morning at the 7-Eleven. If a child recited every single word in the booklet, he or she would get $100 off camp registration. My parents did not have the money to send us to camp in the first place (yet still managed to tithe 10% each Sunday, God bless their souls) and so my sister and I needed to memorize these verses.

Pine Valley Bible Camp was not the kind of camp you see on television or in the movies—the ones with an indoor rock climbing wall, a zip line, and a gigantic bouncy blob in the lake. It was basically just 70 acres of grass with two basketball nets, a pavilion primed for floor hockey, and a 6-foot-deep swimming pool, which was filled to the 5-feet mark and heavy with chlorine. We played games that simply required a lot of land and a lot of kids, like “Capture the Flag” and “Flashlight Tag.” It was the poor Christian man’s summer camp. All the counselors were addressed as “Mr.” and “Miss” and were assigned to lead cabins of about eight to 10 campers. These formally addressed leaders were all under the age of 17, and I thought their lives revolved around us. They made sure we showered, made sure we ate, made sure we participated in all Bible studies and extra-Biblical activities. But as it turned out, they could not have given two shits about us.

My counselor couldn’t have given one shit, and she proved this when a girl in my cabin (let’s call her Annie*) actually took a crap on the windowsill near her bed in the middle of the night. I was the lucky little camper sleeping in the bunk above Annie (and as we all know, heat rises) and my counselor simply walked out of the cabin, her hands cupping her face, and we never saw her again. We were suddenly nine orphan girls with no singing ability to get us through our “hard-knock” times—those times being the 10 or so minutes it took for a new counselor to be assigned to our cabin. No, these teenagers were far more concerned with themselves and the well-versed collegiate fellas who offered them their sweatshirts marked “Messiah” and “Lancaster Bible” when the campfire lost its flames. If I had been given a quarter for every time I overheard a female counselor swooning, “He’s a man after God’s own heart!” or “He’s everything God wants my future husband to be,” when referring to Mr. Dan or Mr. Mark or Mr. He’s Probably Gay, So Save Yourself the Future Heartache, I could have marched directly to the Snack Bar and bought it.

Any other leaders, typically over the age of 40, were called “Aunt” or “Uncle,” in an attempt to drive the whole “Family of God” thing home. Aunt Dee* was what I might call today “sexually ambiguous.” If it hadn’t been for her name, she could have easily been mistaken for an overweight and balding man in his mid-40s. But I guess because she went by “Aunt,” we were all just supposed to ignore the hairy legs and Adam’s apple. No matter what her nametag said, this man would never be my aunt! Like any good Christian, closeted lesbian, she had adopted two African boys, who basically just rode around campus on BMX bikes all day and stared at us through the fence during the late-afternoon swimming hours. Aunt Dee was in charge of the kitchen and cooked every single meal we ate, but would join us in the pool from time to time. Her favorite game was Marco Polo, but I knew better than to respond, “Polo!” to her blind and reaching “Marco!” If I were going to be felt up by a much older woman, it would be on my own terms and only after a night of heavy drinking at a South Jersey hotel in my mid-20s. But I digress.

On the first day of camp, each kid signed up for three activities, which we would attempt to master as the week went on. As part of my eternal quest to become a well-rounded Christian woman, I chose hiking, archery, and ceramics. When Jesus returned to judge us for all eternity, I would have the endurance to march as to war, the skills to kill demons and other beastly creatures, and the ability to masterfully paint ceramic figurines of wild animals, which would keep my husband thirsting for my femininity.

Camp was only one week long and yet I wrote home to my parents at least three times. I believe one of these letters actually arrived at their door several days after I had returned home. I wrote about my new friends, about how awesome archery was, asking, “Can I pleeeease get a Cross Bow for my birthday!?,” and about how terrible the food was that they served us in the mess hall. (Thanks, but no thanks, Aunt Dee!)

I received one letter from them mid-week.

In it, they informed me that our dog, Cody, was taken to the vet because he’s “quite obese and the vet says he has what is known as a thyroid condition” and that in my and my sister’s absence, they had taken in two young girls from the traveling India Children’s Choir—a group of Asian kids most likely plucked from Calcutta’s Red Light District and forced to sing about how Jesus saved their lives in exchange for a seat on a bus and all the Chick-fil-A sandwiches they could possibly digest. My mother went on to say that she and my father had taken these girls out for ice cream and “Can you believe Padmal had never tasted Moose Tracks before!?” God, I hated Padmal. Worse yet, they had purchased the choir’s CD, so for years to come, their voices resonated in our home like mating sparrows and their brown, flawless little faces smiled at us from the CD’s jacket.

But I didn’t mind that one letter was all I got from my parents. If a camper received more than two pieces of mail in a given day, he or she had to sing a song in front of everyone at dinnertime in order to get the letters. This is where I learned that a parent’s open expression of love was rewarded with ridicule. Let them have Padmal, I thought, and I shall have my dignity!

By week’s end, I was awarded “Most Improved Camper,” which is basically a nice way of saying “You really sucked on Monday.” We watched a slideshow of photos from the week as if we were attending a memorial service for our souls B.C. (Before Camp), sang all the lovely camp songs we had learned (“Pharaoh, Pharaoh” and “You Can’t Get to Heaven in a Limousine” being my personal favorites), and then recited Scripture to the proud, grinning faces before us in the audience. This felt like nothing but an act to assure our parents and guardians that their money had been well spent, but dammit if I didn’t sing along with the optional sign language accompanying each word! Whether there were actual deaf people in attendance or not, I will never know, but God. Sees. All.

The following year, I once again attended camp, but I did not write home. I was a big girl now and big girls do whatever the hell they want, Mom! Miss Amy didn’t quite adopt this credo, I guess, because she repeatedly pulled me aside after Camper/Counselor Bible Hour to address my lack of enthusiasm for God’s Word. To be honest, all I could really focus on was that archer’s target standing just beyond the stairs in the valley. I had come so close to it the day before, but my arrow only ever found the bold black line that circled it. I didn’t tell her this, of course. I lied. I told her I was sorry and that I would try harder to show more enthusiasm. And I did.

I found that I could memorize the entire Bible if I really set my mind to it. I could learn how to share Jesus with my friends and neighbors—be a real “fisher of men.” I could train my tongue to speak no evil, my eyes to see no evil, my ears to hear no evil. But it never clicked. The sword of the Spirit, the shield of faith, the helmet of salvation—all these pieces I acquired and wore like a little girl playing dress-up just became items tucked away in my closet with the toys I had grown out of, yet for some reason couldn’t part with. With each move, with each new endeavor, I inherently take these pieces with me.

And while I’m still no Crusader for Christ, I’m one hell of a Hoarder for Him.

*Some names have been changed.

C.B. Riley is a graduate of Penn State and Temple University, where she constructed massive walls of debt in pursuit of genius. She called Philadelphia home for the past eight years, but very recently relocated to the East Bay Area of San Francisco, where her life’s pursuit has changed from genius to red wine…lots and lots of red wine. You can catch her teaching high school students from 8 a.m. to 3 p.m., Monday to Friday. But for more stories, visit www.cbriley.com or tweet her at @CBRiley5. This is her first publication.