Welcome to another installment of If My Book, the Monkeybicycle feature in which authors shed light on their recently released books by comparing them to weird things. This week Amy Gentry writes about Good As Gone, her debut thriller out now from Houghton Mifflin Harcourt. 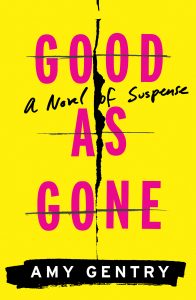 If Good as Gone were a living organism, it would be the upside-down baobab tree with its roots clutching the air. Don’t worry, it’s not really upside-down. You grind its bark into a flavorful powder, but the trunk you hollow for a burial site.

If Good as Gone were a flavor of toothpaste, it would be that sparkly bubblegum kind that comes out of the tube in the shape of a star, which your mother always refused to buy when you were little. She wouldn’t even let you come to the grocery store because you’d sneak it into the cart, like you did the Lucky Charms. “But it’s not sugary,” you’d say, desperate. “It’s for brushing teeth.” She’d bow her head and murmur, “Even the appearance of wrongdoing…”

If Good as Gone were a yoga position, it would be crow pose. Instructions: From a standing position, come into forward fold. Plant hands firmly on the ground, fingers brightly spread, and rotate the eyes of the elbows inward. Bend elbows slightly and place knees on the backs of arms. Lean forward. Feel the weight of the world on your shoulders. Continue leaning until you can lift the toes of both feet off the ground. Focus your gaze on the ground. Watch it yawn open and fall away. Look into the hole. Do not drop the weight of the world. Keep the back of the neck long and the rest of your life short. Do not omit sins of neglect. Tip your center of gravity forward until your palms start to lift. Stay active. Keep your core engaged. Lean further. Push off with your fingertips. Raise your arms overhead. Picture a single beam of light shooting from your toes all the way through the crown of your head. Do not simply fall. Dive energetically toward the grave. If you were meant to live through this, fly.

Amy Gentry is the author of the debut thriller Good as Gone, published by Houghton Mifflin Harcourt in 2016. She frequently contributes book reviews to the Chicago Tribune, and her freelance work has appeared in Salon, Fusion, The Rumpus, LA Review of Books, Austin Chronicle, Gastronomica, The Best Food Writing of 2014, and many more. Amy holds a doctorate in English from the University of Chicago and lives in Austin, Texas. Find out more at amygentryauthor.com, or follow her on Twitter at @unlandedgentry.

0 replies on “IF MY BOOK: Amy Gentry”