Welcome to another installment of If My Book, the Monkeybicycle feature in which authors shed light on their recently released books by comparing them to weird things. This week Jen Michalski writes about The Summer She Was Under Water, her newest novel published by Queen’s Ferry Press. 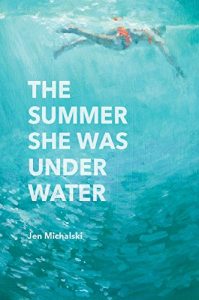 If The Summer She Was Under Water had a smell it would smell like your father’s Aqua Velva and cigarettes, the scent of which always lingered in the front of the Dodge station wagon, the pleather seats of which made your butt ache when you sat on them in the winter, which burned the back of your legs in the summer, where there was always a quilt in the trunk that smelled like Scruffy, but which Scruffy, because you named them all Scruffy, Scruffy 1, Scruffy 2, Scruffy 3, but everyone remembers it was Scruffy 2 who fell out of the trunk window while your mother was driving down Bridgecrest Way, and when you circled back to the intersection, your sister crying, your mother hyperventilating oh my god kids, she’s gonna get killed, she’s gonna get killed, Scruffy 2 was standing on the sidewalk, slightly dazed but no worse for the wear, and no one told your father that night at dinner, not because of guilt, or shame, or embarrassment, but because he never seemed to understand the small agonies and triumphs of your days, your shared adventures, whether it was the trip to Sears or when mom took you to Jack in the Box for lunch with her mad money instead of making you eat the leftover tuna casserole. He’s such a buzzkill, your sister nailed it so succinctly later, when she began to wear Charlie on her neck and on the inside of her wrists and experiment with cigarettes, sealing a Benson & Hedges from Dad, a Merrit from mom, deciding she liked Kools best and then just stealing them from Rose’s department store, back when they used to stock the cartons in the checkout line, not behind glass, although with the gum and playing cards and chapstick, back when people were trusted, sort of, the way you trusted your parents, kind of, to shepherd you both through junior high and high school and doctor’s appointments and places where there was linoleum and vinyl chairs and television sets bolted into ceiling corners, places of authority, where you’d glance over the top of your Rom: Spaceknight comics and your sister over her Lois Duncan paperbacks and then at each other and hope you would never come to these places on your own, or worse yet, with children of your own and how could your childhood ever end, when the only night that mattered was Friday night, wearing your pajamas with the Matchbox racers on them, eating Jiffy Pop, and watching the Six Million Dollar Man on television while your father listened to the Reds game in the garage, puttering around as your mother called it but what you all learned later was drinking, drinking himself shit-faced, but that was what you understood later, after you stopped watching television on Friday nights and hung out two streets over at Derek’s, where you burned shit in his back yard, your Rom comic books and plastic Army men and once batteries until they exploded and almost Hiroshima’ed Derek and that night when you came home and your father was on the porch with your mother, his striped polo soaked through at the armpits, your mother cradling her left arm with her right hand, like a baby or a bird, and your father, cigarette hanging limp out of the side of his mouth, saying your mother had an accident. You hurt her didn’t you, you fucking bastard, you said, even though you still wore your Underoos on the weekends, never at school, where in the locker room the kids would make fun of you, even though just looking at a girl, fully clothed, on the cover of your sister’s Seventeen magazine would make you shoot a rocket in your pants. You were so unformed, so specific in your tastes but so unformed, like clay, so soft. It was an accident, Jeffrey, your mother said as they edged past you toward the Dodge, and you thought of grabbing Scruffy’s blanket from the trunk to cover her, to give her some magical invincibility, but your father waved you back to the house. Wait here for your sister. And that is where she found you, three hours later, after your mother came home in the cast, after your father guided her up the porch steps, his hands clasped above her elbows, as if she were a ladder or a bookcase, after they told you to come into the house but you said you were going to wait for her and they let you, trading this small allowance of your curfew in return for your forgiveness, your silence. What? She looked at you like you were the biggest dork in the world when she hurried up the walk after midnight, after Tommy’s Dart rolled down the street, clutch popping, leaves and twigs snapping under his tires, you sat on the steps and tried not to cry and you felt the draft, a rent in the night, that sharp breeze that smelled like leaves and cold oil puddles under cars and wet newspaper. It smelled sharp, like blood and metal. It smelled like cum and socks and the things you would begin to smell like. It smelled like denim and Charlie and Big Red, like your sister. It smelled like smoke, when your sister passed her cigarette to you and said not so much, not so hard, and you coughed and your eyes watered and you thought you could never, ever do this, but like so many things, you took another drag.

Jen Michalski is the author of the novels The Tide King (Black Lawrence Press, 2013; winner of the Big Moose Prize) and The Summer She Was Under Water (Queens Ferry Press, 2016), of two collections of fiction, Close Encounters (So New, 2007) and From Here (Aqueous Books, 2014), and a collection of novellas, Could You Be With Her Now (Dzanc Books, 2013). She also edited the anthology City Sages: Baltimore, which Baltimore Magazine called “Best of Baltimore” in 2010. She is the founding editor of the literary quarterly jmww, hosts the monthly reading series Starts Here! in Baltimore, and interviews writers at The Nervous Breakdown. Find out more at jenmichalski.com, or follow her on Twitter at @MichalskiJen.

0 replies on “IF MY BOOK: Jen Michalski”