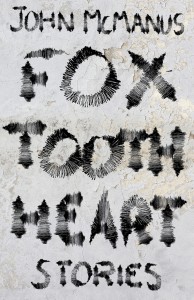 If Fox Tooth Heart were a science-fiction planet, it would be Helliconia.

That’s the setting for a trilogy of novels by Brian W. Aldiss set sometime around the year 6500. By then most of humanity has perished and Earth is uninhabitable. Then again, I last read the trilogy when I was fifteen, so who knows? What I mainly remember—this is true of a lot of my favorite books—is how it made me feel. As far as I recall, the few survivors live in a space station orbiting a planet populated by Bronze Age humans and a race of sentient beasts called phagors. A virus endemic to Helliconia is deadly to Earth humans. Any journey to the planet spells certain death. Nevertheless, station life is so tedious that virtually everyone in orbit dreams of winning the annual lottery down to the surface, where demise is preceded by a few sweet weeks of chaotic freedom.

This is the attitude that propels a lot of the protagonists in my new story collection, who choose danger over safety because it’s the only way they know to feel alive. Not unlike Billy Xiao Pin in Helliconia Summer, they fall off the wagon knowing full well the endgame, or they ride bikes recklessly fast along cliff edges, or drive their real cars the way they drive in video games. Maybe they understand the foolishness of their behavior, but their awareness of themselves is tangential to logical reasoning. Maybe they cling to crazy ideas—they’re solipsists, or they believe they’re telepathically communicating with animals, or that minders are watching their every action via satellite feed.

On Helliconia, there really is an observation station in the sky. For the sake of a bored audience gone mad with ennui, the Helliconians’ complex saga unspools like an epic film. The planet orbits a double star, so every season lasts eons. If an individual human’s life seems to play out like some unending winter, that’s because, for him or her, winter never will end. People torture themselves and torture one another and wander the frozen wastes of strange continents. There’s a torus-shaped underground prison revolving so slowly that each cell can line up with the prison’s exit just once per decade. To enter it, as Luterin does after killing his father, is to bury oneself alive.

Like Luterin, the heroes and villains of Fox Tooth Heart spend long stretches of time alone with their irrational thoughts. Maybe not ten years, but long enough to talk themselves into actions that ruin their lives. On the foundations of single wrong ideas, they construct vast, intricately wrong belief systems. After ten years in the underground prison Luterin emerges a holy man. I try to meet my characters at the beginning of the end of their own isolated decades of addiction, homophobia, abuse, mental illness, or endless unrequited yearning. High jinks ensue.

John McManus is the author of three short story collections—Fox Tooth Heart, Born on a Train, and Stop Breakin Down—and the novel Bitter Milk. His work has appeared in Ploughshares, Tin House, McSweeney’s, American Short Fiction, Electric Literature, Oxford American, and elsewhere. He is the recipient of the Whiting Writers’ Award, the Fellowship of Southern Writers’ New Writing Award, and a Creative Capital Literature grant. He lives in Virginia. Find out more at johnmcmanus.net or follow him on Twitter at @johnpmcmanus.

0 replies on “IF MY BOOK: John McManus”