Welcome to another installment of If My Book, the Monkeybicycle feature in which authors shed light on their recently released books by comparing them to weird things. This week Michelle Ross writes about her debut story collection, There’s So Much They Haven’t Told You, just published by Moon City Press. 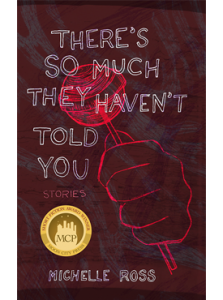 Your partner: that on really bad days, they’ve entertained a murder fantasy involving you in the bathtub, skin glowing in candlelight, while household appliances teeter on the tub’s rim, their plastic cords tapped into the electrical wires that thread your home’s walls like bundled nerves.

At least one of your relatives: that they would kidnap you for a ransom if they thought they could get enough money to make it worth their while.

Your fourth-grade teacher: that she used to relate anecdotes about you at the dinner table, anecdotes that she and her husband and two perfectly symmetrical children laughed and laughed at.

Your mother: that on the nights she read you fairy tales about children abandoned in the woods by their parents, she fantasized about pressing you, like a pinched flower, into the pages of that book; stacking book after book on top until she was sure you couldn’t slip out.

Your neighbors: that when they said they’ll have you over for a drink some time, what they really meant was that you owe them more than a few bottles of liquor for putting up with your yipping dog and last year’s Christmas tree still being visible over the fence between your backyards, even though it’s now March.

More than a few of the people you’ve called friends: that there was a moment, or two, or six dozen, when they imagined cutting your beating heart from your chest and stomping on it until it exploded like a water balloon.

The first person with whom you had sex: that they chose you because they felt reasonably confident that you wouldn’t report them.

Your doctor: that when they asked you how much you drink in a week despite that you’d already answered that question in the endless paperwork you filled out in the waiting room, it wasn’t because they hadn’t bothered to read said paperwork, but that they wanted to see if you could maintain that lie when looking them in the eye.

Your prime friendly competitor: that when they wished you luck regarding that thing you both applied for, they envisioned luck as a cookie they split into two pieces, offering you the slightly smaller half.

A few of your coworkers: that they have seriously considered keying your car, only there are all those office windows facing the parking lot.

Your childhood school bus driver: that they regularly fought an impulse to jerk the wheel and drive the lot of you off a bridge and that this impulse both excited them and made them remorseful.

Michelle Ross is the author of There’s So Much They Haven’t Told You, winner of the 2016 Moon City Press Short Fiction Award (Moon City Press 2017). Her writing has appeared or is forthcoming in The Common, Gulf Coast, Hobart, Paper Darts, TriQuarterly, and other venues. She lives in Tucson, Arizona. Visit her at michellenross.com or follow her on Twitter at @michellenross.