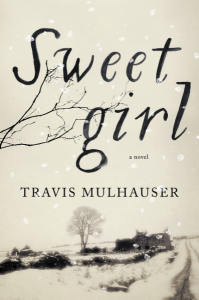 If Sweetgirl were a story your dad repeated it would be the one about the Superman television series and how his favorite episode featured Superman as a baby—mostly because he got to see Superman’s home planet, Krypton. Your dad said he prayed every night, he was seven at the time, that they would show that episode again—but they never did, and he has still never seen it a second time. Years later you would wonder if your dad liked that episode so much because his own mom, your grandmother, abandoned him, and because Superman’s origin story—Krypton is obliterated moments after baby Superman is sent hurtling through space, alone—struck him on some pretty profound levels he was completely unaware of. Or maybe it was just a really badass episode. But either way, how many times have you thought, I have to find him that episode and give it to him for Christmas? And why haven’t you ever done it?

If Sweetgirl were a former Detroit Lion it would be Dominic Raiola, who was, admittedly, rough around the edges. Yes, Dominic Raiola was fined by his own team for flipping off his own team’s fans. (He was sick of them booing). And no, Raiola did not apologize, but instead told reporters he wished he could give the hecklers his home address so that they could come over and fistfight, but lamented the fact that they would probably show up with guns. Dominic Raiola wore number 51 and some referred to him as “The Racoon” because he would scratch your eyeballs out to get a block. He played 104 consecutive NFL games, AS A CENTER, and only missed number 105 because he was suspended. Dominic Raiola was all heart, and yeah, he purposely stepped on an opposing player, hence the suspension, but did anybody ever stop to think that maybe that player deserved it? And no matter how much Bears fans bemoaned that stomp, every one of those fuckers would have loved Dominic Raiola if he were their own. But he wasn’t, because he was ours.

If Sweetgirl were a favorite memory, it would be the one where your two-year-old son says, “dad, I’m pretty sure you’re my best friend in the whole wide world.” Then, five minutes later, while you’re doing the dishes, he comes up behind you and bites you on the soft bit of flesh between your upper leg and ass, hard, and completely without context. You startle, shout, and drop a glass in the sink—then watch in awe, and no small amount of admiration, as he wanders off like absolutely nothing just happened.

Travis Mulhauser is from Petoskey, Michigan. He is the author of two works of fiction, most recently the novel, Sweetgirl, from Ecco/Harper Collins. He lives in Durham, North Carolina, with his wife and two children. Find out more at travismulhauser.com or follow him on Twitter @slangjive.

0 replies on “IF MY BOOK: Travis Mulhauser”