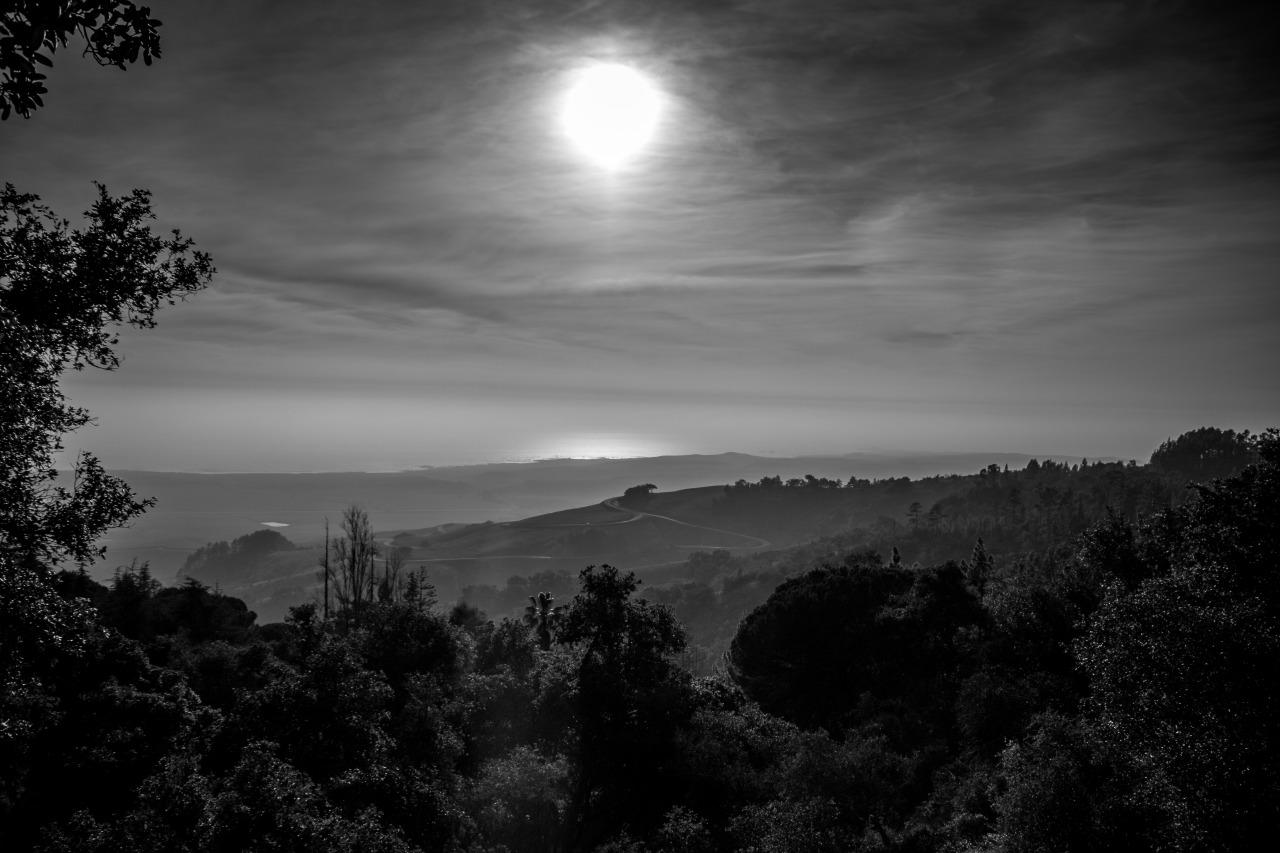 In California When It’s Cold

On a December morning, when all the sea creatures beach themselves over and over again until they fall apart, bones and flesh and innards spilled on the sand, I realize: Yes, I’ll survive never letting go of him.

The noises from the ocean: hissing waves, primal moaning, agony. The smell of the dying sea life: strong, thick, death, rot, us.

Five years ago, when his wife died, Kevin wasn’t there because they’d just started living separately.

“I waited years to leave because I was worried she’d get so sad she’d kill herself,” he’d said. “Never imagined she wouldn’t have a chance to try. What if it’s still my fault anyway?”

He’s stopped telling me things like “I want you,” and “You’re irresistible,” and I’ve stopped believing them. They were hard enough to believe in the first place.

His shirt is untucked, plaid. It’s red and orange and I love the soft things it does to his skin tone. His jeans hang low at his hips, gray. I want to run my hand across his brow, a thumb down the ridge of his nose.

“Be cool, Natalie,” he says. It’s not funny to me anymore but I laugh anyway. I’ll always laugh when he wants me to laugh.

What if I just told him right now: I can’t take this any longer? I’m in too deep and I wouldn’t mind it, if only you were in as deep with me?

What if I just told him right now: I remember the last time we made out, in your car, beneath a maple tree, one in the morning, and the moment before I leaned in to you it was going to be the greatest gift, that I’d get to feel your mouth on mine one more time, but then it wasn’t like that, it was me kissing you and you leaning away, like you were willing me to stop, you at the surface treading water, me in too deep, me sinking to the bottom, I’m drowning, I can’t swim, actually, no, I can swim, I can breathe down here because I grew gills just to survive you, I’m never going to drown and I’m never going to surface and maybe if you’d just lifted your chin to lean into my mouth, maybe this’d be better?

What if I told him no, I can’t go to the coast?

The day after tomorrow, 6:30 AM, and the December light has yet to seep into my east-facing window. My phone rings, waking me up.

I answer, but I take a few seconds to croak out a “Hello?”

“I forgot to mention, we need to stay up there a few days,” he says. “Maybe like, three nights? Can you get off work?”

“You’re asking me the day we’re leaving if I can be gone for three days?”

“It seems I am. Sorry,” he says. I know he’s genuinely sorry, but I know he’s not thinking of the ways he could have done this differently.

“Yeah, probably. I’ll have to bring work with me,” I say. “What is it this time? Are you bringing me because you like being around me or because you need your science expert on hand?”

“Both, obviously. My boss wants me to do a story. Beached whales just north of Ventura. Two in a week.”

“You didn’t say this was gonna be a depressing trip.”

“Hey, more animals die for food than by suiciding on the beach,” he says.

“I know. Maybe let’s not eat meat this trip to balance it out.”

“I’m picking you up in forty-five minutes,” he says. “Get out of bed, sleepyhead.”

His car is hot when he picks me up, the heater blasting. The morning is sunny but very cold, something I wish I could bottle up and live in year round.

We drive for three hours straight, and when we pull off the highway in Ventura, it’s even colder than in San Diego. The breeze cuts as we step out of the car, and I bundle up, wrapping a scarf around my throat.

“You’ve never seen it before?” He laughs and bumps into me, and I try not to read into it. That’s the sort of thing I’d do to him just to feel the skin of his forearm against mine. Be cool, Natalie.

“We live in the wrong place.”

“But anywhere else and I think I’d miss burritos too much.”

We get coffee first and it’s shitty: Too hot, burnt milk, and I even find fault in the way the liquid seeps out of the edges of the lid.

We sit side by side in the sand, our knees to our chests. I tilt my head so that his shadow blocks the low sun. I itch to touch him but there isn’t much skin exposed and I never, ever know if it’d be welcome anymore. The wintry California light sparks off the wedding ring he still wears, the one his dead wife once slid onto his finger.

“Look,” he says, pointing to where the quiet tide meets the sand. “What is that?”

I approach it, lying still in the surf, black and brown, slick and shiny. It’s a small shark. A leopard shark.

I think about how I didn’t have much time to pack properly and I need these jeans dry but there’s a leopard shark right here and it’s either dead or dying, and that will bring me to my knees in the ocean.

I hear him but I see movement in the shark’s tail, and it’s young, a juvenile, and it’s in my arms as I carry it out to sea. I’m still wearing my shoes.

Then Kevin is right there, his hand on my shoulder.

“Here, let me help,” he says, and it’s almost too late because we’re as far as we need to be. The shark is alive but not quite swimming away from us yet.

I feel like a failure. “I don’t know how to keep a leopard shark alive!” I shout, over the noise of the water.

“I’m hardly a scientist anymore,” I say. “All I do is manage people.”

“Come on.” Kevin reaches for my hand underwater. He laces his fingers between mine. “It’s freezing and you just saved a goddamn baby shark. Now isn’t the time for a career crisis.”

I laugh, and I bring our hands to my face. I press my cheek against the back of his hand and close my eyes. He’ll let me have these little moments. Maybe he knows how much I need them. He always waits them out.

Shivering, we run to the car. It’s probably in the high 50s but I feel like I’ll never warm up. He runs the engine to blast the heater, and we change clothes in the backseat of the car. I can’t stop the grin when he looks over at me, both of us almost naked.

He puts his hand on my waist, fingers at my ribcage, tracing down towards the jut of my hipbone, and then he stops. We look at each other and I don’t want to break this. I don’t want to do anything to make him stop looking at me, because right now I am the center of his universe, even if he is thinking about all the reasons he doesn’t want me to be the center of his universe, I’m still there. I cling to it, greedy, thirsty, sick for it. Give me whatever you will give. I’ll take it.

I close my eyes. He moves his hand away from my side.

I pull on something clean, my veins a brilliant blue against blotchy, chilled skin.

That night, in a shitty hotel room, close enough to hear the waves, we sleep holding each other, waking up, fucking, him deciding against it, going back to sleep, waking up, fucking again, and then this time he decides for it and he touches my jaw as he comes, whispering my name against my hair, over and over again and I realize he’s crying. I tell him I’m sorry. I tell him It’s okay.

“Let’s go back to the beach,” I say in the morning, our limbs entangled, because I’m afraid of him being the one to pull away first.

I pull open the blinds and the sky looks so heavy. Thick and tinged a greenish orange-grey.

We dress quickly and leave without eating. Something about the air and the preternatural roar—no, scream—of the ocean makes us not even bother pushing the crosswalk buttons to cross the street. We run. We don’t speak until we reach the boardwalk.

“Wow,” I say, when we see them. Hundreds. No: More. Whales, crabs, the tiniest eels, everything. They’re throwing themselves against the sand and when they get washed back to sea they just come back. They keep trying.

I lurch forward, proceeding, because I need to go help, but Kevin stops me, impossibly warm hands on my shoulders. And right then, the first one succeeds. A Risso’s dolphin, oddly sharklike. We watch it beach itself repeatedly until it falls apart. Blood, guts, bones. Disintegrated into a heap on the sand.

Seconds later, another. This time a tiny shark. Next, a school of fish, maybe smelt or sardines.

The ocean is inky black, and the sky isn’t brightening. It feels like Earth’s death and now that so many animals are falling apart all at once, maybe that’s not such a crazy metaphor. Maybe the world really is ending.

If every creature in the sea falls apart on this beach in California, if the oceanic ecosystem ceases to be, and the seas dry up, then everything on land dies too, and I know he won’t give me any more and I know I can’t give him any less. And even if we don’t survive the ending of the world, at least we’ll survive us.

I’ll never get over him. I never had him in the first place. This is it.

A grey whale, massive, slaps its thunderous body repeatedly on the sand until it falls apart too: Liquefied guts, the soft clink of bones piling up, skin in pieces like a popped balloon.

I lean my head on Kevin’s shoulder. The sky turns black and heavy, relentless.

Julia Dixon Evans is the author of the novel Other Burning Places, forthcoming from Dzanc Books. Her work has appeared or is forthcoming in Hobart, Barrelhouse, Paper Darts, and elsewhere. Follow her on Twitter at @juliadixonevans.