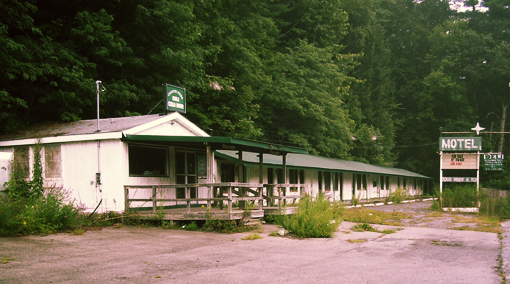 On a dare, Bonnie and I spent a night at the abandoned motel way out Jackson Road. At first it was fun. We lit candles and traded scary stories. We shined flashlights up from our chins and moaned ghost sounds. On a bare mattress in one of the dark, wrecked rooms we made love. Afterwards, we laid in silence for a time, our bodies wrapped close. Then Bonnie said, softly and a little afraid, “Do you hear it?”

I heard nothing. But the fear in her voice blazed shivers down my back. Bonnie’s heart thumped faster against me and I felt mine clamor in response. A minute crawled by. “I don’t hear anything,” I said, and half a beat later there was a sudden female cry out in the courtyard just beyond our door. Bonnie gasped and lunged up so she was sitting. We waited for another sound but there was nothing. The night shifted and it got cold and we both began to get scared for real.

“I’ll go and see,” I said at last. I tried to act like everything was cool but I was light-headed and teary with fear. Out in the courtyard, the black open doorways of fifty empty rooms stared at me like pirate eyes. In the center, an old tin slide glowed with moonlight beside a murky half-filled swimming pool layered with dead leaves.

Alone and crying softly at the edge of the pool sat a young girl, maybe eleven years old, in a white t-shirt and jeans. She was clearly a girl and not a ghost, and that spooked me more than anything. I took one step forward. At the gentle sound of my foot on the grass, the girl looked up, saw me there, and jumped up and dashed off rabbit-like across the courtyard; all the way down at the far end she slipped through a tear in the fence and disappeared. I stood out there for an hour, watched and watching. Big rigs on I-94 howled whale songs into the sad and haunted night.

Davy Rothbart is the creator of FOUND Magazine and a regular contributor to public radio’s This American Life. His book, FOUND: The Best Lost, Tossed, and Forgotten Items from Around the World, was published in May by Simon & Schuster; His collection of stories, The Lone Surfer of Montana, Kansas, will be released in July 2005, also from Simon & Schuster. Davy Rothbart cannot dunk a basketball, but he drops dimes that make people shout.