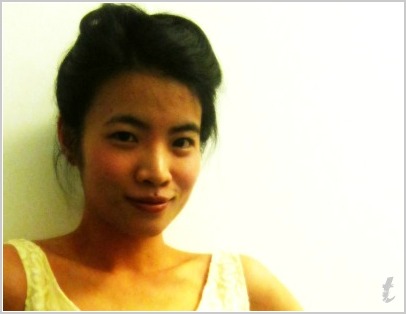 Tammy Ho Lai-Ming is a Hong Kong-born writer and editor. She is a co-founder of Cha: An Asian Literary Journal, the marketing director of the London-based Fleeting Books and an editor of the academic journal, Victorian Network. Her poetry has been nominated for the Pushcart Prize three times and the Forward Prize. She is an Assistant Professor at Hong Kong Baptist University and she teaches poetry, fiction and modern drama.

Monkeybicycle: Editor, academic on Neo-Victorian literature, professor, poet, and photographer—how do you find time to do so much?

Tammy Ho Lai-Ming: I don’t sleep much and I sometimes don’t sleep at all if I am working on something entirely engrossing. I recently read an article about the damage that sleep deprivation does to one’s brain; I should really reconsider my very bad habit of sleeping only a few hours a day.

Your question “How do you find time to do so much?” sounds as though Time and I are perpetually engaged in an existential hide-and-seek game: we are playmates, we are collaborators, but we are also somehow opposed to one another. Sometimes, Time generously allows himself to be found, his benevolent arrow poking out for me to spot after a lecture on poetry or a departmental seminar. More often, however, I have to look really hard, between books and meals.

I’ve called you stern, a constellation of times.
But when your big eyes are half their size—
when you are drunk despite your denials—
you think it the most natural thing to dance,
to amuse me, and you are not stern at all. At all.

Mb: Your poetry is full of love, but also this quiet delicacy, as if waiting for the dream to collapse. What about poetry draws you to love, or what about love draws you to poetry?

THL: I think perhaps I write too many poems about love compared to other themes. Real love, imaginary love, passionate love, love and sex, unrequited love, love that laughs with you, love that laughs at you, love that is ancient, love that is new, love that has gone cold and should no longer be called love, jealous love, family love, self love. I like your description: “full of . . . quiet delicacy, as if waiting for the dream to collapse”. I would not have thought of associating my love poems to “delicacy.” I would have used “uncouth,” “girly” (although less so now as I age and wither), “obsessive.” My work obsessively returns to certain states of mind, at times violent, at times nonplussed.

Poetry has been used to express, congratulate, comment on, record, narrate and critique love since the earliest history of humanity. For me, reading a good love poem, and by ‘good’ I don’t necessarily mean ‘happy,’ makes me sigh, makes me want to read it again and again. I sigh a lot when reading portions of Louis MacNeice’s Autumn Journal, for example. Emily Dickinson said, “If I read a book and it makes my body so cold no fire even can warm me, I know this is poetry.” For me, if I read a poem and it makes me sigh a kind of half-orgasmic sigh, I know this is a good poem.

Mb: You write a great deal in English and your poetry is both lyrical and conversational. How has being multilingual affected your relationship to language?

THL: I don’t think much about my being multilingual when I am writing a poem. I write exclusively in English now and it is the language I am most comfortable with (in writing, anyway), more so than Chinese, perhaps because I have been using English intensely, daily, for over a decade. When I first returned to Hong Kong from London, my sisters remarked that my Cantonese [the variety of Chinese spoken in Hong Kong] was ‘funny.’ That was strange and a little embarrassing. But Cantonese is a robust language and in my four-year absence, new expressions have emerged and been incorporated into the collective consciousness and some older ones have become less ‘natural’ when employed in conversation. Recently, during an interview with a journalist from a local magazine, I had to switch from Cantonese to English several times to express myself better. And on several occasions, the journalist had to kindly reassure me that this-and-that Chinese expression was indeed idiomatic and not something I’d made up on the spot. She asked me whether I thought English was a ‘romantic’ language, a question I think is relevant to yours, and my response was that I don’t see English as romantic or as having any other innate universal characteristic. However, for me personally, it has a simultaneously familiar and estranged edge. I know it well enough to speak it and write in it but I don’t know it well enough to understand everything. Writing in English is sometimes like writing in a vivid dream. It is vivid, but how do I know I am remembering it right?

“Hear me howl,” you whispered.
You were awkward. But unlike a wolf

you were gentle. As gentle as a canine could be.
Half an hour disappeared until you,
my wayward youth, and I, yes I, became
aware again. Then we walked your Great Dane.
When we were silent, we heard
the rattle of loosening chains.
Too dark, too wet, too late to stroll far
in pyjamas, we underestimated the night.
Still, we needn’t have turned on the light to see
the stairs. And then you were back inside me.

Mb: What is most important to you about the language of poetry?

THL: Finding the right balance between accessibility and personality. The latter may manifest itself in eccentric, awkward, slightly pretentious use of language. The key is not to compromise one’s meanings and aesthetic ideals so that a work can be understood by everyone. Your work won’t be understood by everyone; it may not even be understood by you. Sometimes, that may turn out to be the better outcome. I always appreciate writers who dare to take abundant liberties with language and yet do not make you feel excluded.

Mb: You’re the co-founder of Cha: An Asian Literary Journal, which is celebrating its sixth year of publication. What makes Cha unique? And how has it developed over the last six years?

Over the last six years, we have introduced a number of features that make the journal special. For example, each issue is guest edited by one or two former contributors, who read the submissions with Jeff Zroback (my co-editor) and I, and who help us make the final editorial decisions. This gives each issue a different flavor and tone and fosters a sense of community: the fact that past contributors are happy to return to work with us as guest editors tells us that they like the journal enough to want to continue a relationship with it. This is very heartening. We also hold contests (poetry, flash fiction, critiques) whenever a patron is interested in funding one. We are also in a very good position to publish special issues such as “The China Issue” (July 2011) and “The Ancient Asia Issue” (December 2013), which I hope are useful resources for those who are particularly interested in Asian-themed literature written in or translated into English. The journal has also branched out to two other projects: 1) A Cup of Fine Tea, where we write accessible commentaries on or creative responses to works published in Cha and 2) the blog, Hong Kong Lucida, run by our Reviews Editor Eddie Tay, which features Hong Kong street photography and explores the intersection between poetry, cityscapes, people and photography. We are now considering some new directions/channels for the journal that I hope we can unveil later this year.

Mb: Living abroad had a profound impact on my life and sort of turned its direction pretty far from where it was heading. How has living abroad influenced you?

THL: Living in London for four years was one of the best and most memorable experiences in my life. It was liberating to be immersed in a city whose primary language is not my mother tongue, liberating because I felt that I was not confined by my origins, linguistic and cultural, and that emboldened me, somehow, to do new things, to explore more, to learn and love more. I also loved the London theatre and the wide variety of cultural offerings in the city. Such a vibrant, interesting and all-embracing artistic and cultural hub. I even grew to like the trains there; their undisciplined nature became endearing and it was kind of enjoyable to moan about them. Samuel Johnson famously said, ‘When a man is tired of London, he is tired of life; for there is in London all that life can afford.’ Centuries on, Johnson is still right.