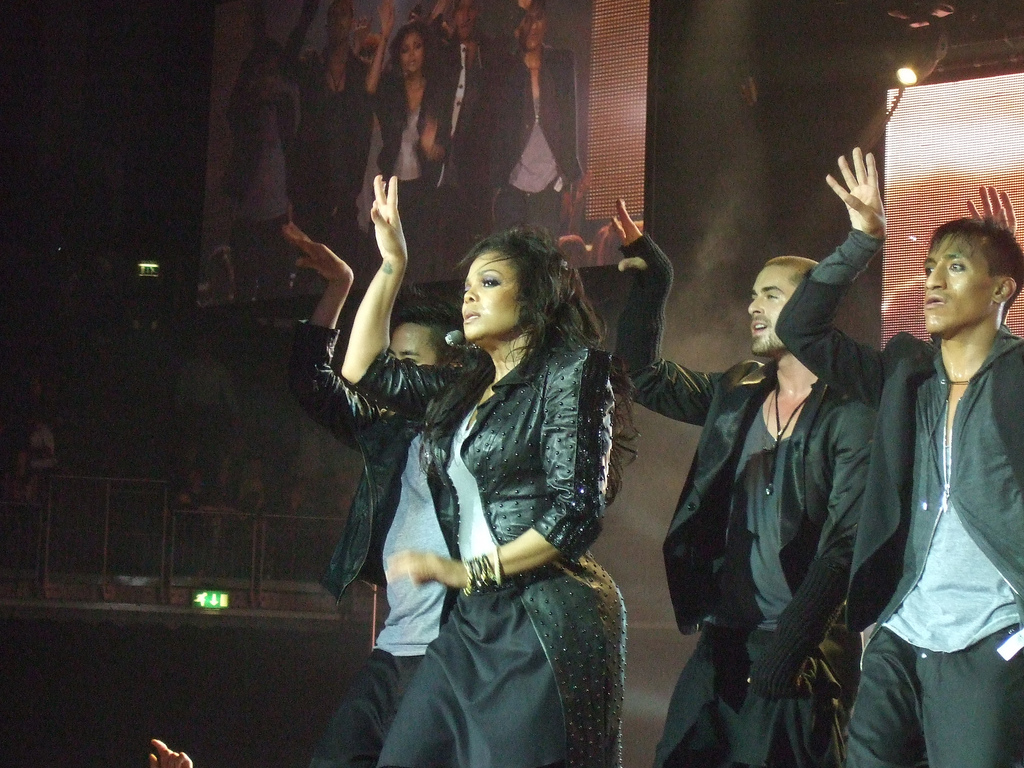 Janet Jackson’s Concert for the Pantsuit Nation: Field Notes from a Dance Interpreter

The Jacob K. Javits Convention Center in New York is at capacity, with the 15,000 assembled chanting “Hell no, we won’t go.”

Then longtime pantsuit aficionado Janet Jackson climbs onstage and clicks her heels three times. The despondent women of the Pantsuit Nation—and the men who love them—snap to attention. She’s as familiar as a family member, but not the recently estranged kind. The Nation grew up with Ms. Jackson on TV, trying to imitate her “Nasty” video backflip into the movie screen, longing to lead a band of half-shirted male street urchins in a choreographed dance. Are they nasty, or are they With Her? By video’s end, our leading lady is back on the other side of the screen, the urchins pressing their faces against it, separated.

Tonight her stage presence manages to convey “I’m a sweetheart” with adorable, dimpled grin, while her unimpeachable posture and militaristic blazer with medals say, “Back it the beep beep up.” Wordlessly, she communicates: I stand here before you in a suit. Cat suit, jumpsuit, pantsuit, I wore them all. Never a skirt suit, unless you count the Good Times wardrobe. Single knee-to-elbow tap drives it home: this is a suit. No need to qualify. Unless you want to, as the wink/hair flip conveys, and “Damn Baby” begins. Pantsuit Nation is, of course, an awfully catchy name. One can see why Beyoncé is in the front row.

At center stage, Ms. Jackson gyrates to tell us, Ladies, nasty women, seek ye some quality hombres. For too long you have suffered the nasty boys, nasty in the bad sense of the word, too grabby, lurking bigly over your shoulder at nationally inopportune times, tarnishing the good nastiness that we exude on the daily. Oh you nasty boys, for you I give no more than a mid-kick and half-split bounce-back. If that.

The dance slows. My nasty women. It’s been a long year. Maybe you want to take the pantsuit off. Maybe the shoulder pads weigh heavy on your frame, or the trousers bunch weirdly at the ass (Note: Speculation. Her derriere is impeccable.) Maybe you are wearing the pantsuit to be taken more seriously, like a man.

The jacket is off. Any dance interpreter worth her salt knows what this move says: Girl. Take it off if you want. Wear a Velcro patch over one rubber-corseted breast. The repetitive ripping motion during “Control” brings to mind the infamous Nip Slip of ’04. The FCC shamed her, yet the public demand to re-see the exposed nipple helped launch YouTube. Look it up, fact checkers. Ms. Jackson (if you’re nasty) (and you are) shrugs and fake-rips the patch over one nip. Her body, her choice.

Or go bigger with a boxy-ass blazer made of stretchy material that can handle a pregnant woman doing a back bend—oh my, that requires some flexibility—while simulating giving birth. Swaddle the infant in the blazer.

“Rhythm Nation” headset in place. Perform your executive-level job between contractions. Is that a delivery guy on stage? I stand corrected. Use the headset to order flowers for yourself while giving birth. When you’re back from reasonable, company-paid maternity leave, you can opt for three breastmilk pumping breaks a day. Plus tailoring to let your pantsuit in or out as needed. Put the suit back on just as before: one leg at a time.

Whoa! Crotch grab time during “When I Think of You.” An homage to her late brother Michael, and likely a gesture to a certain pussy-grabbing President—no, the other one. (Note: I wrote a dissertation on Duality and Double Entendre in Women’s Hip Hop/Pop. I’d bet my K-tel cassette collection that it’s both.) The meaning behind that youthful side ponytail-turned-whip is as loaded as a Wendy’s baked potato. She is the whip, Pantsuit fam, reclaiming power and authority. Combined with a 360-degree hip swivel, the message moves us to the bedroom. Ms. Janet Privacy Control shows you inside the boudoir and shuts the door, demarcating boundaries between the private and public spheres.

Yours may vary, she indicates with open arms and a roundhouse kick, pantsuit leg flaring. Ladies’ choice.

When Ms. Jackson alone delivers the song’s final plaintive line: “That’s the end?” A chorus of thousands of pantsuited women, plus the millions watching at home, roar their unified, ear-shattering No.

The tinkling glass of the Javits ceiling sounds like bells, followed by the whoosh of fifteen thousand blazers, removed and used as shields.

Sarah Layden is the author of Trip Through Your Wires, a novel. Her short fiction can be found in Boston Review, McSweeney’s Internet Tendency, Booth, PANK, Zone 3, and elsewhere. She teaches writing at Indiana University-Purdue University Indianapolis and the Indiana Writers Center. Find out more at sarahlayden.com or follow her on Twitter at @calmoots.