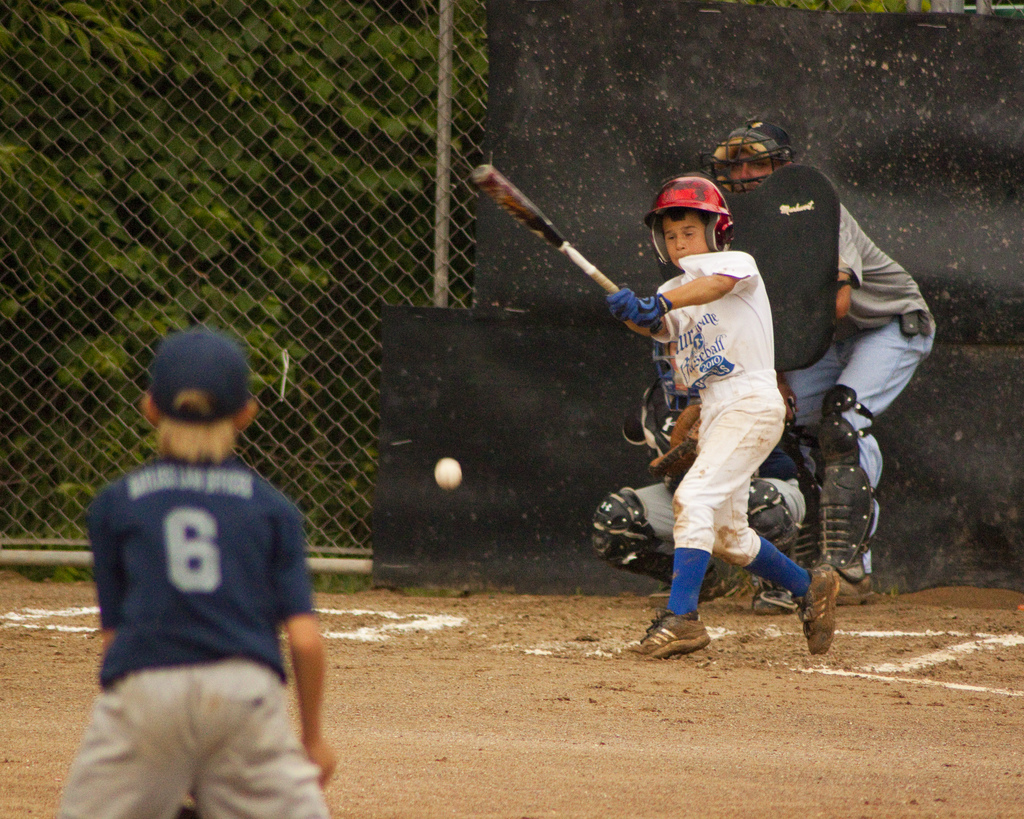 John, son of Kat and Stacy, that nice lesbian couple everyone seems to like, so cool with Paolo, the donor dad, that they even invite him to John’s Little League games, despite the fact that Stacy’s cutting eyes reveal she isn’t so cool about it as Kat, who birthed the boy, and, they say, conceived him “the old fashioned way,” steps up to the plate with the confidence instilled by parents who, mathematically speaking at least, as a trio, provide fifty percent more support than even the most energetically positive of the conventional couples in the stands, waves his bat with the enthusiasm Coach Bob has said many times he wishes he could bottle like Gatorade, an enthusiasm that often cheers the parents more than his teammates and which has the downside of leading John to swing always at the first pitch, which he does, with a wild, lunging swing, and hits the ball, a genuine Rawlings model RLLB1 regulation Little League ball, manufactured in Turrialba, Costa Rica, at the same plant where the official Major League balls are hand-stitched by workers who are paid by the piece, mere pennies per ball, this particular specimen looping into right field, right at Connor Wingate, whose dad, Mike, sitting alone at the top of the stands, his wife Jill having served the divorce papers only yesterday, brooding over the question of how they would break the news to their son, a sensitive kid who doesn’t like sports, but who is playing today, Mike frankly admits, because he pushed him into it, not because he thinks boys necessarily should play sports, but only because he remembers how much he had enjoyed it himself as a kid, which he might never have realized had his own dad not signed him up and forced the issue, since Mike, too, had been a shy kid, though no one would know it now, Mr. Volunteer, Mr. Schmooze, Mr. I’ve-Got-Time-for-Anybody-and-Everybody, to hear his soon-to-be-ex-wife tell it, but hoping still that his son might take an interest, even as Connor pointedly makes no effort for the ball, raising his glove just enough to shade his eyes as he watches it sail over his shoulder, easily within arm’s reach, if only he would deign to try for it, as if to say, “Here’s what you can do with your baseball, Dad,” crazy kid that he was, claiming at ten to be vegan and refusing to wear his leather glove, also a Rawlings product by the way, without an intervening blue nitrile surgeon’s glove to “protect” his skin from contact with “dead animal flesh,” even going on the internet to research every negative thing he could find about baseball and its admittedly troubled history, martialing his arguments against the very legitimacy of the sport, much less his participation in it, and now smirking at the groans from the dugout, ignoring the shouts of Tommy Burns, the centerfielder, who isn’t trying to chase down the ball either, arguing instead with Coach Corey that it is not his ball to field but Connor’s, leaving it to Coach Corey’s son Jeremy to hustle all the way from his position at shortstop to retrieve the ball from the tall grass by the parking lot, all this while John bounces around the bases and Kat, Stacy, and Paolo scream triumph, and the numerically disadvantaged Mike watches in mute pain, staring at an imaginary spot suspended above the clover of right field, an enchanted circle between the earth and sky, where Rawlings ball might have been intercepted by Rawlings glove, where his son might have been a hero, where he was on his feet, shouting and high-fiving other parents in the stands, instead of sitting there, stunned and humiliated, wondering what had become of this sport he once loved.

Michael Compton writes novels, screenplays, and short stories. He is the author of the meta-noir-mystery novel Gumshoe, and co-author of the apocalyptic thriller Inferno 2033. He teaches English at The University of Memphis and blogs with his dog Ike. Proceeds from his writing support animal rescue. Follow him on Twitter at @ikeandmikeblog.