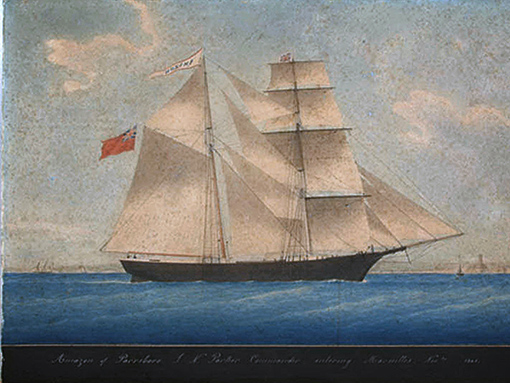 In 2011 the world of historical maritime research was thrown into turmoil when a diary, purportedly written by a passenger of the Mary Celeste, was found on the island of Papatoa. The early section of the diary had been badly damaged by sea, sand and sun and was therefore of little use. However, after much conscientious restoration, a fragment from the final part of the journal was retrieved. Written in an ancient form of Romani, in a childish script which was difficult to decipher, the text was largely a mystery to palaeographers till Professor Samantha Memi, the esteemed lexicographer, decipherer, transliterator and part-time epistemologist, translated the work into English. This is an excerpted preview of the publication which is due in late 2014. At present there is no methodological study to substantiate the veracity of this diary. It is left to the reader’s critical faculties to find the truth of the matter.

November 16, 1872
Things don’t get any better. The sea is still rough and Mama has been seasick for three days. According to Captain Briggs we were supposed to be taking a detour round the isles of the Azores especially for the passengers entertainment but, ever since that giant sea snake snatched the captain’s wife Sarah, and their daughter Sophie, along with my own dearest Uncle Ebenezer and two other passengers, from the deck, our voyage to Italy has become more of a torment from Hell than a journey home.

Captain Briggs blames us for the death of his wife and said that he should never have accepted us as passengers, and that we have brought bad luck to his ship, but it was he, in a bar in New York, who had said to my parents, after taking pity on them because they had arrived too late and their ship had sailed, that he would be willing to take us as passengers and that he would be able to show us many wonders of the world and, even though it was strictly against regulations, also took on board other passengers without seemingly being too specific about where his ship was going. We all believed this to be a miracle and thanked the Captain kindly. Now the death of Sarah, a quiet and gentle woman, has obviously unhinged the captain’s mind. He repeatedly curses us and tells us he will take us on a voyage through Hell in order to teach us a lesson for the death of his wife and child. Both Papa and Mama, upset at losing Mama’s dearest brother, pleaded with the Captain to return to New York, but the captain simply said, “Ye paid for a voyage and I’ll give ye a voyage.”

November 17, 1872
I remember boarding the ship, walking up the gang plank and the jovial Captain Briggs shouting, “All aboard! the Mary Celeste!” and laughing. I smiled in my childish way, grateful that we had at last found a way of travelling to see my grandfather in Italy.

I miss Sarah’s melodeon and her singing. In his madness Briggs threw all of Sarah’s music into the sea.

November 19, 1872
Yesterday the captain told us we’d be sailing into the largest cave in the world, and if the truth be known it seems he was telling the truth; stalactites like grotesque monsters loomed out of the candlelit darkness. Three good Christian passengers, a family called Delmante, believing themselves to be in Hell, fell to their knees and prayed to the good Lord above to forgive them for their sins. The cave was a dark damp place that filled everyone with much foreboding. But it was when we sailed out of the cave that we discovered the shocking truth, two other people had disappeared. It was rumoured they were so afeared of the strange echo in the cave that they were become mad and for that reason had threw themselves into Davy Jones locker. That’s six people have now gone missing.

November 21, 1872
[indecipherable sentences] … in spite of my prayers a young boy was washed overboard by a swell caused by a one of its giant tentacles. His mother cried, “Aye, mi bambino Giuseppe.” And jumped after him. The father, seeing his wife and son swept into the arms of a monstrous octopus, realised he had nothing to live for and jumped in after them. All provided the eight armed creature with a tasty dinner.
The traumatised crew and remaining passengers wailed and cried but Captain Briggs said, “that’s the way of the sea, she’s a cruel mistress.” And we sailed on over the endless water and the setting sun and flickering moon. Afterwards Papa said I was foolish not to flee the evil creature when it appeared beside the ship, but, in truth, I could not. I felt as if I had been imbued with sufficient will to outwit the creature with my steely eye. Alas I was mistaken, and now more passengers have met their end in this voyage of satanic misery.

November 23, 1872
Yesterday was the worst day of my life. The captain said we would be entering the sea of sirens and, if we looked carefully through the mists, we would be able to see the mermaids, but he warned us, grievously, to take great care against being hypnotised by the sounds of the sirens for their sighs and whispers were said to be sensuous and would entice our souls to Hades. Mother and I looked at each other with dread in our hearts as we went up on deck. Mist was all around and nothing could be seen. We heard the mermaids singing. Songs so soft you could feel your heart melt. I held Mother’s hand and realised that the longer I held it the colder it became.

Then the mist parted and on a rock lay a mermaid, her scaly green tail, half in, half out of the sea, her green seaweed hair fell in strands over her face, and she looked at the ship with her red eyes and beckoned with a scaly finger. Suddenly mother let go of my hand and rushed to the side of the ship, flinging herself over the railing into the dark depths. I ran and managed to grab her ankle as she plummeted over, but she slipped from my grasp and was gone into the mist and the murky sea. A few seconds later another innocent soul met the same fate. Papa is so distraught all he can do is rage against God and curse life itself, I fear he has been taken into the caress of la luna. He knows not who I am, nor where we are, and spends all day weeping and moaning. I no longer feel I can go on but wish, like so many others before me, to throw myself over the side of the ship and cast my fate into the arms of the Almighty. I cannot put into words how I feel at this moment. I wish only to die. I told the cook, a deeply religious man, how I feel and all he said was, “It is God’s wishes.” Why would God want to take my mother and father from me. I hate this ship. I want for nothing more than to return to my American home.

November 25, 1872
There are now only five of us left. We have sufficient food and water, but I am convinced the captain is mad. A few days ago we sailed into what the captain called the Peninsula of Hades, “where the bowels of the earth meet the sea,” he said, and there, a giant sea monster with three heads and seven eyes scared everyone so much that the Christian Delmantes screamed ‘abandon ship!’ and cut the ropes for a life-boat, then jumped into the sea to escape. But the fragile boat was dashed on the rocks. Their pitiful wails still haunt me.

November 27, 1872
Finally the Captain has said we will make directly for Genoa. But he insists we first visit the giant tarantulas of Oriaaluo Bay. Spiders the size of cats that swing from trees. I have a great fear of spiders. Even tiny ones that ran across the floor of my bedroom at home cause me to scream and jump onto my bed and refuse to move till my mother intervenes on my behalf to kill the culprits. But these Oriaaluo spiders spread their webs from the branches of trees and jump on board ships to catch their human prey, wrap them in spider thread and drink their human blood. The monsters are said to be green with red eyes, and an old sailor told me that one look from them casts such fear in the soul that the heart stops and the victim dies long before the spider’s fangs do their deadly work. When he told me that I nearly died. I wish I had. No one wants to go to this spider land, least of all me. We want to sail home not continue a journey of a thousand horrors, but the mad captain insists. The remaining passengers petitioned the captain to return to Nova Scotia, but he would hear none of it. Apparently he flew into a rage, banged on a table and threw crockery around his cabin. “It’s perfectly safe he says.” His crew follow his orders as if they are too terrified to do anything else. Tomorrow we sail to the land of spiders. I pray to God.

Epilogue: in a 1837 edition of The Voyages of Bartholomew de la Frey we find this note: ‘At an island called Oriajaluo there are said to be spiders big enough to eat men. They trap them with spider thread, then suck their blood. Sailors are said to be too scared to sail there.’

Samantha Memi lives in London where she bakes cakes and eats them. Her stories have been published in magazines and can be read at http://samanthamemi.weebly.com. Follow her on Twitter at @samanthamemi.