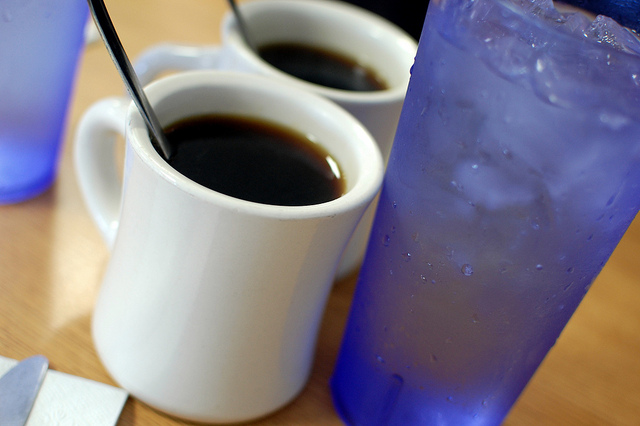 We were sitting in a booth at our favorite diner when I suggested we do the questionnaire that was supposed to make people fall in love. My girlfriend said it was a bad idea because the questionnaire, featured in a popular article, was for couples that were not already in love. I told her we could skip over anything we already knew about each other and then, probably not knowing what else to say, she pulled up the quiz and asked the first question.

If you could have as a dinner guest anyone in the world, who would you want it to be?

The waitress refilled our coffees while we were thinking. I told my girlfriend I was ready. She said she was ready, too. I said the names of two moderately successful writers whose work I respected.

My girlfriend said, “My sister.”

I told her she had to answer again because answering with a family member was cheating. It was the greeting card answer, and if I had known we were answering with our hearts and not our fantasies I would have said something different. “And your sister lives in Maine,” I said. “You could see her this weekend.”

“I know,” she said. “I just don’t get to see her that often and I don’t think a famous person would want to come over for dinner.”

“I don’t either,” I said, “but that’s the tacit rule of the game. The people who come over for dinner would actually want to be there. So if that’s the rule, who would you want that person to be?”

“There’s no person dead or alive you would want to meet?”

She shook her head.

“Not a single person in the history of humanity?”

She thought about it. Her eyes landed on the TV, talking to itself in the corner. The sound of traffic was coming in through the windows. The waitress had gone out to smoke, and we were the only ones in the diner except for the man in the back, washing dishes. I could see his thick arms over the swinging doors, holding a high-powered sprayer to wash the grime off the plates and bowls.

“I guess I would want someone funny,” my girlfriend said, “but if they came over, they probably wouldn’t be funny. They would probably just be themselves. So yeah, I would still want my sister.”

“Fine,” I said. “If these are the rules then I wouldn’t want a writer to come over. I would want my mom.”

My girlfriend looked at her phone, preparing to read the next question.

“You really can’t think of anyone?” I asked.

“I know you’re a proud person and you don’t have any reverence for celebrities because celebrity is a sham, but I still think it’s important to respect people who have done things we haven’t. There are so many people who have done fantastic things—explorers, inventors, painters, musicians. It’s disappointing to think you wouldn’t want to meet a single one of them.”

“What are you saying?”

The waitress put the check at the end of the table.

“You think you’re smarter than me, don’t you? You talk down to me all the time. You like to make me feel dumb.”

“That’s absurd,” I said, taking out my wallet. “I wouldn’t be spending so much time with you if I thought you were dumb. You are a kind and intelligent woman and I love you.”

I finally found the right card and she exhaled the way she does: perturbed, disturbed and unwilling to look me in the eyes. I reached for her hand across the table and she pulled it away.

We split the check and walked back to her apartment. We didn’t talk, but the silence was fine. The street was calm and the air was cool. But as I followed her up the steps, our whole relationship started to feel like an illusion. Our closeness was a dance invented by someone else, and the music could stop at any moment and the dance would be over.

I brushed my teeth with the toothbrush she let me keep in her medicine cabinet. I undressed and put my clothes on top of the bookshelf, where the cat wouldn’t shed on them. I slept on my side of the bed and she slept on hers.

The next morning, she asked how I was feeling and I said, “Fine.” I read my book in the living room and she heated up my coffee in the microwave when it got cold. We went back to the diner a couple nights later and I asked if she wanted to finish the questionnaire. She said no. There was no point. We were already in love.

ERICA PEPLIN is a fiction writer and film critic from Detroit. Her stories have appeared in Joyland, Hobart, Shabby Doll House, and McSweeney’s. You can follow her on Twitter at @ericapeplin.