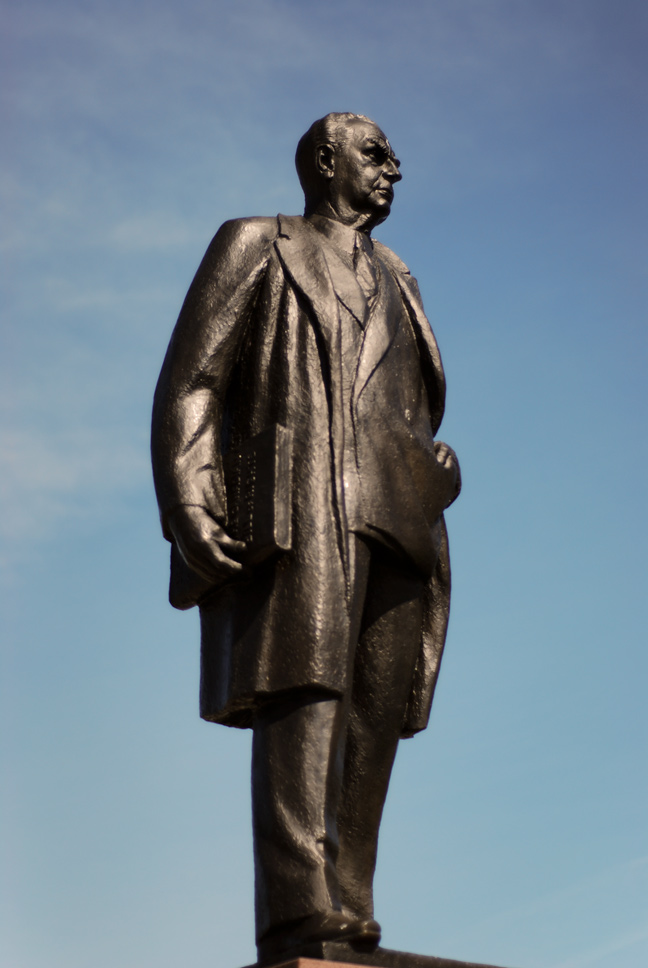 To Repair a Whole They Had Never Broken

The horde came to hear his noontime speech, and they trample on grounds made of marble and cobblestone when he is finished. Buildings line the Center’s periphery, energy-efficient panels and solar-absorbent glass buttressed against the old riot-proof complexes and antebellum courthouses preceding them. Structures designed by architects trained in the east, too, with edifices finished by initiated masons. Only to be carved and raised to the mid-rise sky by lines of tribes and clans and folks babbling in so many tongues of their hunger, brought in the bowels from the Old World they’d escaped.

They look at our mayor, and see the city. His mouth draws a straight line linking bronze cheeks. From its slit, he delivers script to the gathered, the pantomime of truth uttered in platitudes. His eyes blaze a maniacal green, and the Civic Center congregants erupt with their calls for “encore!” no matter that he beseeches that they sacrifice their own rightful largesse, hunker down and work harder still to swim toward a surface cloaking their reward. He instructs them to give of themselves for the greater good, all to repair a whole they had never broken.

There is no lilt in his voice, but listen closely, there is a clear rhythm to be heard in the delivery. His eloquence is practiced unconscious in its pitch, as some scribbler from an Eastern metropolis once described it. His tenor culls neither Midlands jazz nor Southern blues, nothing particularly folksy in his sound either. A sanctified preacher’s gospel maybe, proffered on behalf of gods that even our ancestors didn’t know—or couldn’t explain to us. Mayor Otto’s spoken tune beams like the emerald in his gaze. Touching us, because it is that profound. Or because we want for it, and for him, to wield such power to change this place.

Yet even those of us who still cling to this sterling figure as the “Beacon of Sunrise in a New Middle City” (as trumpeted by his campaign literature), those who, excuse me, slip into bathos and describe him as ours because he embodies this set of ideals thought dead with our grandparents—even we know deep within that he is just a politician serving at the leisure of overlords. How could he have made it to the top in a place like this, otherwise? Given his birth?

Otto was produced by no known corner or segmented quarter, no urban womb. He is not from the gilded shore front, nor is he emerged from the river like Moses. Neither from north nor west, nor its south branch, where its waters spill back into the Midlands Bay. He is the Middle City’s first Negro mayor, elected some twenty years after such firsts lost their impact in the country’s other hubs. Yet his election was something of a mortal miracle here, recalling the city’s peculiarly bloody brand of purple race strife, as told in the history books and the black-and-white 35mm camera. But no matter his hue, he is surely not of the destitute Cape wards. The horde from that place may adore him en masse, but his glint is too sharp, his mouth too purposed. This mayor cannot be a seed grown out of these fecund fields.

He straight back salutes the groundswell (or maybe his gesture is intended for the city’s red, white and blue splayed mosaic of a flag, flapping in the river breeze above us), before reaching over the heads of clamoring plebes to squeeze the faceless mitts behind. Our mayor signs the posters & campaign fliers of supporters at fawning request, with elegant, gold-knob quills. He whispers slick, asexual come-ons to mothers who’ve strolled to the rally from their secure subdivision near the Center. The women go flush—several of them nearly lose grip of their own children in mid-quiver at his nearness. He moves on, hovering magnanimously from one police-quartered throng to the next. His raised hand flattens from patriot salute to cardinal gesture, waving over the people and allowing the blessing of the Divine which has graced him aplenty to shine through his parted fingers. Fleetingly, he bestows the Civic Center mass with his benediction.

His presence hearkens to his first campaign’s favored populist allusions: Huey Long, Bobby Kennedy, Harold Washington. Reminds of them much as his straight-backed eminence, his hue and the seething shadows at his back connect to a history recalled by those of more cynical mind: Kevin White, Ed Koch, Frank Rizzo, the Bradley Effect. He is a man of the democratic (small and capital “Dem”) majority. The voice of their desires, destined for great things in their service, and he is the embodiment of that very greatest of their wants, too: to be both saved and ordered, put in place by powers beyond their reach. The voice not of infinite mastery, but of master’s foreman, obliging us all to abide.

The mass of descended citizenry mill about and jostle for a view of this afternoon’s departing hero in the shadow of a steel flagpole to the north. Within the Center and just to the west of the pole, there is a forty-foot marble statue: this gray bearded effigy in repose, raised to a long-dead figure whose name few recall with precision. One of those figures from the middle school civics curriculum. As the citizenry throng about their well-buffed, sable mayor, surely they take some note of this paean in his background. Surely they see history here, between stitched and spangled cotton flapping to the north, and the vacant bronze eyes peering from a mantle on which no pigeons dared to land.

Bayo Ojikutu is the award-winning author of the novels 47th Street Black and Free Burning. “To Repair a Whole They Had Never Broken” is an excerpt from a novel in progress.