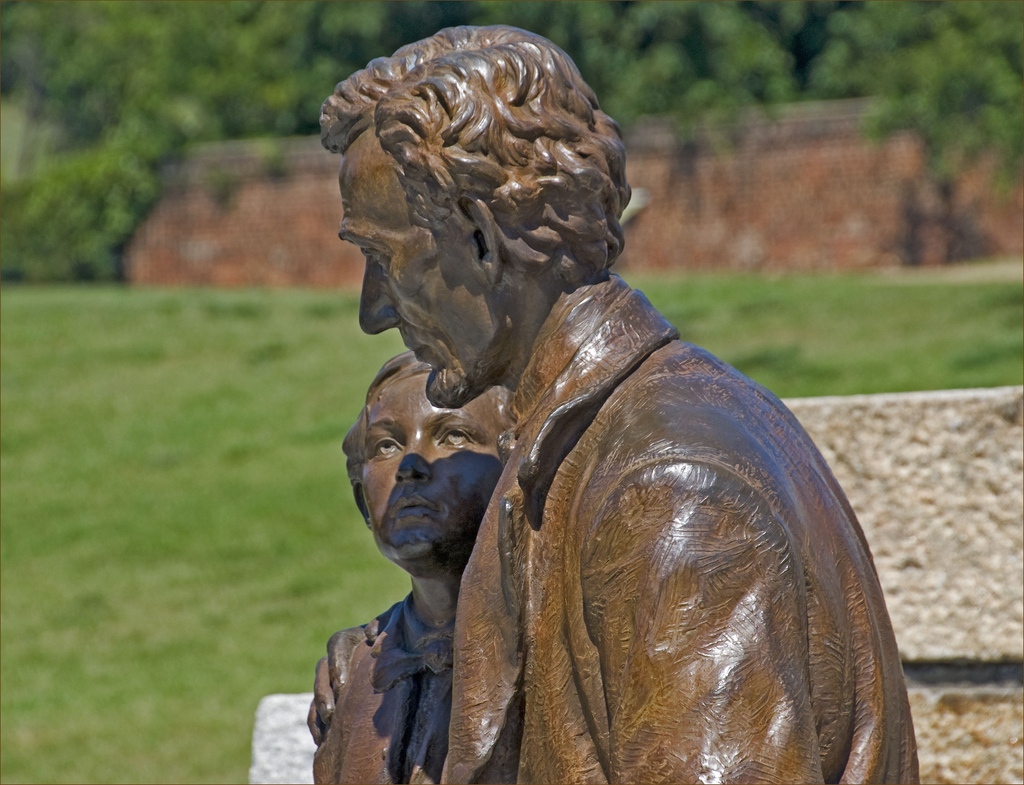 We built them in every plaza, large packs of horses and our favorite presidents and the founders of our cities. They reminded us of our history, kept us grateful and proud to be who we were. They were beautiful to look at, and powerful and strong, and we picnicked in their shadows.

How were we to know the danger? We expected it from so many places, rising oceans and incurable diseases, but not from this. We weren’t prepared.

The day the statues came to life, we hid inside and watched through windows. In Texas, herds of mustangs stampeded into buildings. Down in Mexico, monks swept through the streets, and their footsteps split the sidewalks and sent spiderweb cracks up the buildings. Over in Italy, Old Testament heroes hunted and fought each other. Back in El Paso, Oñate rode through town on his giant horse and began conquering again, and we questioned why we had commemorated a war hero with a ten-meter statue.

We decided to fight. We had built these creatures, and we could destroy them. And so we organized. At first we formed small cells of soldiers, met in underground tunnels and caves, sent messages by carrier pigeons and courageous horsemen. We pulled old cannons from museums and stood side by side, armed with shotguns and golf clubs and shovels. We held hands and yelled, “Come and get us if you dare!” It felt like something, to be united against these creatures we had built, to face our own history hand in hand and say to it, “Come and do your worst. We are ready.”

We chose ourselves a leader—some joked and called him Jack the Giant Hunter, as if he could climb a magic beanstalk and slay the giant and return peace to us. He represented everything we loved about ourselves, our strength and our intelligence and our fortitude. With him leading the charge, we almost felt proud that we had created these monsters. We were powerful enough to destroy the world, and so of course we must be powerful enough to save it.

The day before we went to war we slapped each other on the back. “It’s almost over,” we said. “Soon we’ll have our world back.” We talked about building a big statue for Jack after the war was won, five times the size of life, built of iron or bronze or even gold, and we all laughed at that idea. Our statue-building days were over.

We sat around our campfires that night, hidden far from the statues, and sang songs. We sang about the hard days behind us, the victory that was sure to come. We drank wine and told stories and ate our fill, our final preparation for the morning’s fight. We went to bed with one another, made love without fear, because tomorrow the statues would be gone and the children we created would grow up in a safe world, a better one, where we had learned our lesson and lived wisely and in plenty.

The fight when it came was no fight at all. The statues smashed through our barricade, crushed our weapons. They stomped through our camps and destroyed our tents and food and possessions. We scurried around their feet and shot bullets upward, but the bullets ricocheted off their chests and wounded us instead. We fired cannons at a few of them, and the cannonballs were enough to crumble the statues, but after we had fired the last we had nothing left to use, no secret weapon or magic spell that would turn the tables and give us the victory. We prayed to our gods, but they were silent, or worse: they stomped against us with the other statues we had carved. So we ran for our lives.

In hiding, we watched the world crumble. The statues traveled the streets unchallenged, on stone legs we had carved and enormous steeds we had chiseled. They broke and tore and destroyed our world, and it felt like we were doing it to ourselves, because from deep in our hiding places we knew we were to blame.

Now the statues roam. We scurry around them. Most of us have taken to the countryside, and the statues chase us further and further away from our old life each day. We scavenge as much as we can for the children we bore, soothe their cries when they are hungry, carry them on our backs when they are tired. We tell them stories of the world back before the statues. Back when gardens grew and businesses thrived and the cities were ours. Back when we ruled the earth, and we marked our rule with monuments in every plaza.
This is how the world ends.

With giant bronze bulls crashing through Wall Street, stone lions roaming the streets of Chicago, soldiers riding on horseback across Russia, gargoyles flying through Europe. With the slow, steady stomp of giants, the mountains crumbling, the prairies splitting in two.

Courtney Craggett is a doctoral candidate in creative writing and Chicano/a literature at the University of North Texas, where she teaches English and has served as the Assistant Fiction Editor for the American Literary Review. Her stories appear or are forthcoming in Mid-American Review, Washington Square Review, Juked, and Word Riot, among others. Her reviews appear in American Microreviews and Interviews. Courtney currently lives in Denton, TX with her dog, Santiago, and is finishing a story collection and a novel. Follow her on Twitter at @clcraggett.