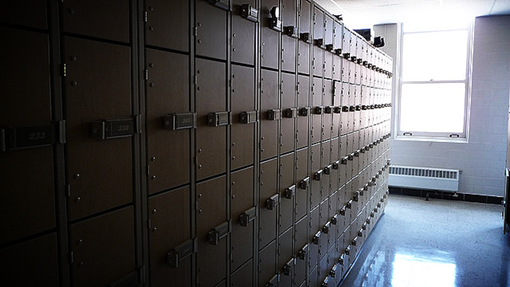 In junior high we were always calling each other cocksucker or queer, dickhead or dumbfuck, standing in the locker room waiting for the showers, our thin chests stuck out, chins raised in challenge, late afternoons in August after football practice under the full weight of summer. We’d spent the last three hours slamming into one another with high forearms and low blows and even though we were exhausted, the extra energy, the rush of adrenaline, ran through us and came out in curses.

It was a jungle in there. The August heat heaved down and steam rose from the showers. The clink of heavy lifting came through the walls from the senior high side, along with grunts that sounded more like apes than our older brothers. The trash cans were full of spit. We stripped off the helmets and pads we used to protect us and stood exposed in the awkwardness of puberty. Hair sprouted in strange places. Our voices had deepened over the summer and our dicks had gotten bigger. We felt as strange as our new bodies looked, and it seemed the only way we could protect our thin and fragile selves was to hurl words at one another in defense, shred the shields someone else had up by calling him cunt or cock or cumfucker.

And because we were boys in men’s skin, sometimes the words we used stirred the latent anger that lingered in all of us with our changing bodies, and fists flew as fast as the words fucker or faggot. After Eric Nevens called Martin Davis cockbreath, Martin blacked both Eric’s eyes and busted an eardrum. Amos Taylor slugged Andy Jenkins in the shower, both of them slipping on soap scum as they struggled, naked bodies in contact until the chorus of “cock-touchers” began and they broke apart to finish the fight later, fully clothed.

As we grew older our words got worse. So did the fights. At a football game one Friday night in early November, thin scraps of clouds flying across the face of a fall moon, Jody Hernandez punched seven or eight seniors from the opposing school because one of them called him an asshat, before finally the cops were called and he was carted off to jail for felony assault. Phillip Rainey and Scott Garret met once a week at the park after school, a hundred cars filling the parking area and people spreading out blankets and downing cold drinks as the fighters floundered around in the grass, gathering twigs and leaves in their hair, gravel sticking to skin when they rolled onto the asphalt.

After high school I worked in a factory for a time, and standing on the line watching the parts roll endlessly toward us someone would say the boss was an ass-rash or a clogged toilet or a wet skid mark and we’d pass a few laughing minutes creating words to contain the contempt we felt for whoever carried the clipboard that evening. In the military we called each other dickweeds and dildos, and after long August days serving under sergeants who named us pussies and penis wrinkles we often wondered what the fuck we were doing there, until night fell and we hit the showers to wash off everything except the words we kept firing at one another.

In my late twenties I began to write. I spent hours studying the etymology of words, how fuck derived from ficken or foutre or fucksail, but none of the entries ever told me why we use words the way we do, and I never figured it out until one fall evening not long after the twin towers fell. I was sitting in a bar when the man at the next barstool turned to me. The news was showing scenes from Afghanistan, where the first soldiers were landing as the war began.

“We should nuke the whole fucking country,” the man said. “Goddamn sandniggers.”

I didn’t have the heart to tell him I’ve heard such sentiments so many times the words have lost all meaning. It seems the same any place men congregate, and life is little more than some junior high locker room, full of the first signs of puberty, all hard dicks and dangling balls, chests sprouting hairs, voices deepening, storing words to use in all the conflicts to come.

Paul Crenshaw’s stories and essays have appeared or are forthcoming in The Best American Essays, anthologies by W.W. Norton and Houghton Mifflin, Glimmer Train, Ecotone, North American Review and Brevity, among others. He teaches writing and literature at Elon University.