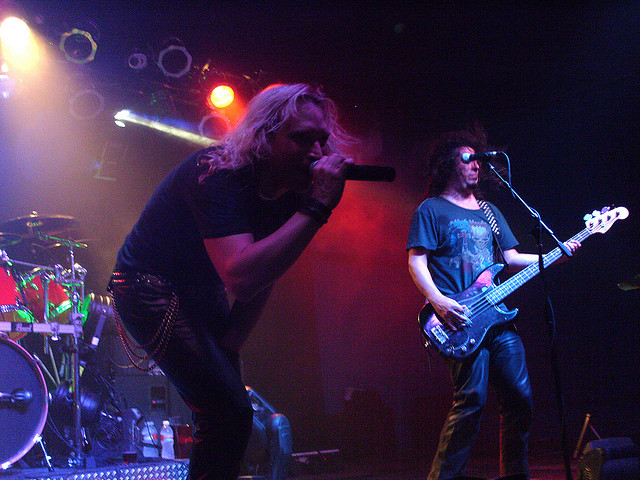 The stock show had wrapped up the night before, but everything still smelled like pig shit. Standing before a fogged mirror in the men’s room of the Grafton Event Center, a 1500-watt blow dryer in one hand, a teasing brush in the other, the Incredible Hunk felt a cloud of despair descend on him.

He had been working for over twenty minutes on his hair and things were only getting worse. Twenty-seven years of perms and bleaches had given it the consistency of light-gauge copper wire, and more strenuous measures were required to work it back into an approximation of its former glory. He fingered the power switch on the blow dryer, bracing himself for one more foray, when a loud shriek echoed off the concrete walls.

He knew immediately what it was—Sausage’s back had gone out on him again. He turned around to see his lead guitarist squirming on the greasy cement floor, Glam and Woody staring listlessly down at him. A long, involuntary sigh tsunamied through Hunk’s chest. It was, he thought, going to be a bad night.

Hunk peeked at his watch. It was 7:24, just six minutes to showtime. One of the more insulting clauses in their contract¬—borne, if he was completely honest with himself, from a long history of tardy appearances and outright no-shows from their Top 40 days—was that if they weren’t on stage at precisely the agreed-upon time, they would forfeit their pay. And not getting paid tonight was completely unacceptable. It would mean, among other things, that they wouldn’t have the gas money to get to Minot, where they were scheduled to play tomorrow. That no-show would in turn imperil their gigs in the entire North Dakota tour.

“Well?” he snapped at Woody and Glam, who avoided his eyes like sullen high school boys caught sneaking cigarettes. “Do something.”

“Like what?” Glam was the more vocal of the two. As the situation with the band deteriorated, Woody and Glam, the drummer and bassist, drew closer together. Hunk could see a mutiny brewing somewhere in their tiny little rhythm section brains.

“I don’t know,” he said, “stretch him out. That works sometimes.”

Glam and Woody exchanged a glance, and then turned in unison to face him. This was it, he thought, whatever they’ve been plotting, whispering together in the back of the van, it’s coming now.

“We don’t want to,” Glam said. “He’s huge. What about our backs? Woody’s elbow’s been going out, and the weather must be changing because my bursitis is acting up—”

“Look,” Hunk said, “we don’t have time for this. Just stretch him.” He summoned up the dregs of his lead singer stage command and focused it on Woody and Glam.

The two of them glared at him for a few moments and dropped their gazes to the floor where Sausage lay, moaning quietly. Arranging themselves at either end of him, they grabbed his feet and hands and, leaning back, began to yank him in opposite directions.

The Hunk could understand their reluctance. Since the last rehab, Sausage seemed to have channeled all of his addictive energy into vending machine candy bars. He must be over three hundred pounds now, Hunk thought, watching Glam and Woody wrestle with him. He had outgrown all of his old stage clothes and now often went on in sequined dresses that he found at women’s plus-size outlet stores. He was wearing one now, and he looked like the corpse of some giant sea creature, washed up on the beach and then bedazzled by a mob of sparkle-mad school girls.

“It’s no good,” Glam puffed, abandoning Sausage’s feet. “This is bullshit. Everything about this,” he waved his hand around and somehow the gesture encompassed everything—the dingy bathroom, the animal, fecal smell in the air, the gray, dying town of Grafton with its sad little Event Center, in fact, the entire twenty-year downward trajectory of a has-been hair band—“this is all bullshit. “It’s over, man,” he said. “It’s over.”

The Incredible Hunk could think of no response. He looked around at the sweating concrete walls and graffitied bathroom stalls, the chipped urinals, the clogged toilet, and felt his energy drain. Maybe Glam was right. Maybe it was time to give up.

There was a banging on the door, and then it swung open, revealing the bowling ball shape of Mrs. Hoveland, the Event Center manager.

“Two minutes,” she said, her eyes like two chips of asphalt in a mound of bread dough. “Two minutes, or I cancel the show.” It was clear that this prospect delighted her. The entire upper Midwest seemed to be run by women like this—hard Lutheran matrons who viewed pleasure as the issue of Lucifer.

Her eyes dropped to the great bulk of Sausage. “He’s passed out, isn’t he?” she crowed, her eyes widening in a spasm of outraged joy. “No drugs. That’s article 12b in your contract. You’re finished if he’s high.” Her tiny eyes moved around the bathroom, her nose twitching as she tried to catch the faintest whiff of sin. “Well, anyway, you’ve got a minute thirty now.”

“We’ll be there, Mrs. Hoveland,” Hunk said. “Now if you could leave our dressing room.” He walked over and shut the door in her face.

Hunk glanced at himself one more time in the mirror. The time had come for desperate measures. He moved over to where the Sausage lay moaning and squatted down next to him, trying to avoid skin contact with the sticky green floor. He looked down at Sausage’s anguished face. Sausage had once been described by a smitten music journalist as a bright, diaphanous spirit of music. Now his fat lay on him in unruly piles, and his skin looked like curdled milk.

“So I was thinking—just spitballing here—I thought that maybe you can just sit this one out. Me and Glam and Woody will do it by ourselves.”

“You can’t even stand up. People will understand.”

Sausage glared at him. “You’d go on without me?”

“I don’t want to.” Hunk stood up. “But you’re really a mess. If we just tell Mrs. Hoveland that you’re not—“

Hunk took a deep breath. It just might work, he thought. They might be saved. “Yeah? I don’t see how you can.”

Sausage’s massive chest began to heave, his breath making steam engine sounds as it puffed out of his mouth. “Fuck you, fuck you, fuck you,” he chanted over and over. Then, he shut his eyes tight and with a massive grunt, rolled onto his belly.

“Nothing keeps The Sausage from playing a show,” he wheezed. “Nothing.” He squirmed convulsively over to one of the sinks. As he moved, the glitter on his muumuu left behind a streak of sequins like a snail trail. Hunk, Glam, and Woody watched him, transfixed.

Reaching up and clutching the lip of the basin, he tried to pull himself upright, but his hands slipped, and with a howl, he fell back to the floor. Glam started forward to help him, but Hunk put out a restraining hand. He can do it, he thought. He can do it all by himself.

Sausage lay there for a few moments, and for a long, terror-filled moment Hunk thought that perhaps all was lost. But then, with a loud gasp the guitarist launched himself upward again. His face red and mottled with effort, his breath coming in jet engine gusts, he hoisted himself, inch by agonizing inch, to his feet. Finally upright, he stood braced against the chipped porcelain, making small animal noises of pain.

Then, with a howl that made Hunk jump, Sausage slowly straightened his spine, the muscles and ligaments crackling as they heaved themselves back into alignment. Head hanging, body swaying, he leaned against the sink for a few long moments. Hunk took an involuntary step forward, thinking that he might pass out, but Sausage raised his head and looked at them in the mirror. “I’m ready,” he said. “The Sausage is ready.” He extended his forefinger and pinkie in the heavy metal devil horn sign and held it aloft. “I’m ready to rock and fucking roll.”

Hunk glanced at Glam and Woody, who were staring open-mouthed at Sausage. “Yeah,” he said. “Rock and roll.” There was something in the room now, an energy that he hadn’t experienced in years. He ran his hands through his hair, and it felt, impossibly, supple and flowing, silken, luxurious. “Yeah,” he said, all signs of his previous exhaustion gone. “Let’s go kick some ass.”

“Are you ready to rock and roll?”

Hunk really felt it now, youth and strength and rock and roll, chains of lightning that leaped around the room, galvanizing everything it touched. “I said, are you ready to rock and roll?”

“Yes! Yes!” Both Woody and Glam were shouting, their eyes alight. They were with him now. For the first time in years, they were a band again.

“All right, boys,” Hunk said, as he had nearly every night for the last twenty-six years, since their single “Sweet Peach Pie” had broken into the high twenties on the Billboard charts, “let’s go make some panties wet.”

On their way out the door, Hunk glanced down at the sequins Sausage had left on the bathroom floor. It wasn’t a snail trail, he thought, it was stardust.

The stage was tiny, even by county fair standards. Sausage lurched dangerously toward the edge, and Hunk offered a silent prayer that he wouldn’t fall into the seats as he did in Sioux Falls. He looked out into the audience. A sparse collection of decrepit oldsters swayed in the stands, ready to be rocked, along with a small clump of irony-minded hipsters. It didn’t matter. The chaos and ecstasy of Tyrant Angel was coming at them like a meteor.

He made a signal to Glam, who started counting off the first song.

“Hello, Grafton,” he screamed into the mic. The first power chord hit him like an explosion, the force diminished only slightly by the fact that Woody’s left elbow seemed to go out just as he was reaching for the big opening cymbal crash.

Sausage and Glam swung into the familiar rhythm of “Hot Sticky Mess,” tight and loud. He squinted into the crowd. The oldsters were on their feet, pumping their fists.

Then Sausage played a long, ascending run of notes that shot up Hunk’s spine like an electrical current, and then settled into the crunching riff, the three of them, Glam, Woody and Sausage a single, blazing instrument. A scrawny man with a long silver beard stuck out his tongue and made some wild groin thrusts. Hunk waited as they rolled through the opening riff a few extra times, each cycle bringing them to a higher peak of intensity.

The hipsters were bolt upright in their seats. A half-dozen were even standing, drawn to their feet against their will. They felt it. They all felt it. The music, the roaring, irresistible horsepower of it, was beauty, strength, life everlasting, the only perfect thing on Earth. A chubby gray-haired woman in the front row pulled up her tube top to reveal two flat, flaccid breasts. Hunk pointed to her. “This one’s for the ladies,” he shouted. Glaring out into the stands, he raised his arms in the air and took a deep breath. This was going to be the best night of their lives.

John Haggerty’s work has appeared, most recently, in Hobart, Nimrod, and Salon. He won the 2013 Pinch Literary Award in Fiction and 2014 Literal Latté Short Short Contest. He is putting the finishing touches on his first novel, Calamity Springs, which was a finalist for the 2013 James Jones First Novel Fellowship. He is a member of online writers’ co-operative, The Fiction Forge. http://john-haggerty.com

Fiction
Previous Post39th Street, Oakland
Next PostEXCERPT: We Came All This Way