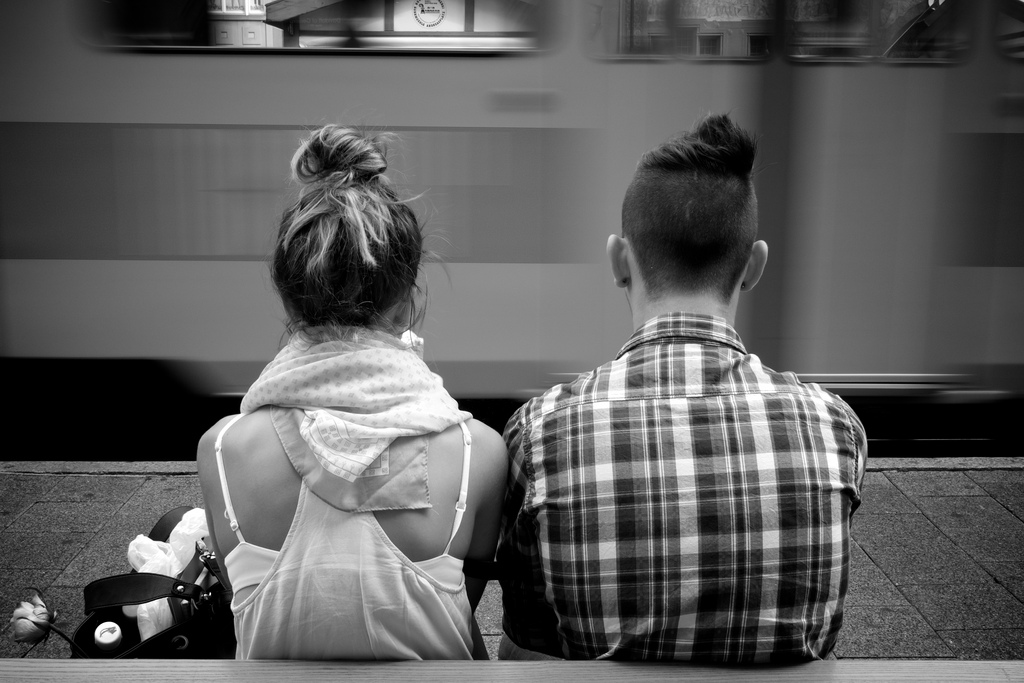 Ten Ideas for Small Talk Upon Re-entering the Dating Pool

1. Weather
If the sun is out, remind the cute girl you have just met that you once heard that sunlight is best absorbed on the wrists and back of neck, but when she challenges you on this point, immediately lose confidence and take it back. You’ve already turned your wrists over in demonstration, so leave them there, walking along the streets of Seattle with your hands out as if you are going in for the hug you didn’t, in fact, go in for upon meeting her, extending a hand as if this were a business meeting because after fifteen years and two kids with the same woman, you are a pod person who has no clue how to talk to the humans, and certainly not to women who might want to date you, believing you to be the carefree spirit you presented online.
If it is not sunny, a sarcastic comment about the weather will suffice but not lead anywhere useful.

2. The Latest Movies
If you have seen a movie in the past month, by all means, share this information. Keep in mind that twenty-minute cartoons about bear detectives that you pass off as “movies” to give you a respite from your children’s bickering do not count. Also, if all you’ve seen of a movie is the parody skit on YouTube, do not try to play it like you’ve seen the actual movie; you’ll quickly out yourself when you refer to how funny that particularly unfunny scene was. If all you’ve watched lately is sitcoms and porn, do not reveal this information.

3. Sports
Tread carefully, friend! You might nod and smile too enthusiastically when listening to a story about a ball player you’ve never heard of, because you literally don’t know the name of any ball player, and she will be alerted enough to ask, “Do you have any idea who I’m talking about?” and you will be forced to say no, and to try to make up for it by telling her your dad is “really into sports,” but this is not an area where proximity counts. Do not reveal that everyone who knows you laughed when you said you were going to a sporting event. Do not reveal that you still think of these things, in lump sum, as sporting events.

4. News
Safe topics include disapproval over current conservative politicians, sadness over recent celebrity deaths (barring revelations of misogyny and/or racism in the wake of said deaths), support for recent protests, and baby goat videos. Avoid mentioning what’s really on your mind, which is the woman who was murdered by someone she met on the very same dating site you’re on, a woman who was also a mother, who had also gone to a nearly identical sporting event, who lived in this same city. Remind yourself of the differences: number one, you are not dating men. There is no number two. Feel consoled by this, even though a lesbian identity is not exactly protection against anything. Don’t feel too bad about sheltering yourself from what you don’t want to know, and don’t feel too bad about failing to shelter yourself either. Don’t try to picture any of it. Don’t question the ownership of your body, or what it means to take a risk on love, or what responsibility you have to your own self vs. your children, and for god’s sake, do not in any way shoehorn these questions into small talk, no matter how much you’ve had to drink.

5. Family
This is, by far, the easiest thing to talk about, but beware of going overboard. You don’t want to sound like a mom. Or, rather, you don’t want to sound like you have nothing to talk about besides your kids, even though everything you do that isn’t work is with your kids, and you feel the strain like a pulled muscle when you are gone from them too long, and you are worried about your oldest, and then worried about your youngest, and like it is when they are climbing on your shoulders and wrapping themselves around your legs, they leave little space for anything else. There are few other single moms that you have found in this dating pool, and fewer with kids as young as yours, and you understand why. But the result is that the eligible women are all singing karaoke on booze cruises while you are playing Go Fish and changing the batteries in the Star Wars trivia box and and cleaning spills from the pony tea party and breaking up the latest fight over Pokemon cards and answering so many questions like “Mom, why am I wet?” that you’ve begun to make a list of all the questions you hear in a day that follow the word Mom. You are working knots out of your daughter’s hair and telling her not to kick, you are kicking the ball with your son and asking what upset him at school, you are talking to the school counselor and collecting box tops, you are buying groceries and taking out the trash, you are donating old clothes and working the popcorn machine, you are trying to explain what is self-esteem and who is Billy Idol and what does a mayor actually do and that you are wet because your shirt is in the teapot. So no, you can’t remember the last time you went kayaking. And no, you haven’t been to a winery in a while. And no, you don’t enjoy cooking or travel often or shower regularly. What you admit, tentatively, is that your son plays soccer and your daughter likes princesses, and if you were dating a man, you think, he’d be as pleased as your parents are that your children have grown into such traditional gender roles, but you know from experience that here you are preaching to exactly the wrong crowd. It’s impossible to explain how these children became who they are, what you gave them and what you kept from them, how careful you were not to impose. Don’t wait to find out if she’s a judgy type. Just direct the conversation elsewhere.

6. Work
Let’s face it: not even you understand what you do. Saying “I’m working on this essay? On small talk? But not really just about that, but like, about life? Or whatever?” will for sure result in a blank stare, and attempting to ameliorate the awkward silence with a disclaimer about how explaining your work always makes it seem ridiculous will, in fact, only make it seem more ridiculous, and DID YOU JUST USE THE WORD AMELIORATE? and you should know by now that pointing out the existence of awkward silence never, repeat never, makes the silence less awkward, so now it is up to her to say something about her work, and she does, and it is good, only you can’t pay attention because you’re stuck on how you can never describe what you do in a way that makes sense to anyone, so when she pauses and you smile and nod in the same way you did about the ball player, you are forced to acknowledge for the millionth time that you are terrible at small talk and should probably live in a cave.

7. Travel
Mention that you went to the tulip festival, but not the line of traffic you sat in for forty-five minutes, a one-way road with ditches on both sides, or how your thought, as soon as you finally reached the parking spot, was that if The Big One hit right then you’d be trapped with two kids, half a bottle of water, and a two-month-old breakfast cookie. Mention the orangesicle and lemon drop flowers but not the holy-fuck-is-that-the-line for the Port-a-Potty, and how you weighed the relative privacy of the woodsy area across the canal against the pain of holding it the whole way back, another one-lane road, and anyway, what was the worst that could happen if you were caught with your pants down in public? Which is the kind of thing you should never admit to thinking, and anyway, is a moot point since the canal was too wide to jump. Mention that the kids took their first selfies in the tulips, but not that you stopped off at Chuck E Cheese on the way home and stole a good twenty of your children’s tokens to use on the coin pusher game, which you have been wasting tokens on since fourth grade because, apparently, you remain a believer in spite of all evidence that you are being duped.

8. Celebrity gossip
Don’t be brave. You’ll end up knee-deep in a story about what’s-her-face, who was spotted with that guy from the movie with the dog, you know, the dog with the face? Which will get you started on the video of the dog that can say “I love you, Mama,” and frankly, nobody wants to hear that.

9. Hobbies
You have hobbies in theory, so go ahead and talk about your love of gardening, even though, historically, two weeks into summer you give up the battle against drought and slugs and caterpillars and let the whole thing rot. Talk about running, which is something you own the correct shoes to do. Talk in a light, airy way about reading, but know that attempting to describe the contents of what you are reading will end as badly as attempting to describe your own writing. Do not question if this difficulty with description means you are in the wrong profession.

10. Hometown
Describe your hometown in a way that suggests you are describing yourself: hot, busy, lovably strange. Wax poetic—this is the only topic on which it is permissible. Tell her how you miss stepping into water that is the same temperature as your body, congratulate yourself on how you just asked her to picture you semi-nude, and let the perceived success of that moment propel you to disclose, next, that you used to slather yourself in baby oil to bake in the sun. She may cringe at this, in which case quickly insert that you no longer do that, and in fact recently purchased a long-sleeved bathing top, and when she says, “Long sleeved?” pinch your cardigan at the neck and launch into a non sequitor about snow suits because, apparently, you are clumsy at undressing even in small talk. Reconcile that this means you are an all-or-nothing sort of girl, bikinis or long underwear but nothing in between, and that you are terrible at small talk because it is small. It toes a line that you want to annihilate, and this time, go ahead and put the word annihilate on the table between you like a note that says, “Do you like me circle yes or no,” and when she looks at you quizzically and says, “You’re funny,” maybe she means funny as in something smells funny, but it’s possible that she means ha-ha funny, so go with that for now. Tell her your hometown is a body of body-temperature water where the boundaries of self extend through and beyond the sandy banks, and that nothing you love has ever been easy to condense, and that you don’t do shallow. Tell her she’s beautiful, tell her to come closer, tell her this is the end of small talk. She won’t back away because, as it turns out, she’s been waiting for the real conversation to begin.

Kelly Magee is the author of Body Language, winner of the Katherine Anne Porter Prize, and Nobody Understands You Like You, forthcoming from Gold Wake Press, as well as several collaborative books. Her work has appeared in Gulf Coast, Nimrod, Booth, Barrelhouse, Crazyhorse, and others. She teaches at Western Washington University and can be found at kellyelizabethmagee.com and on Twitter at @kmagee29.