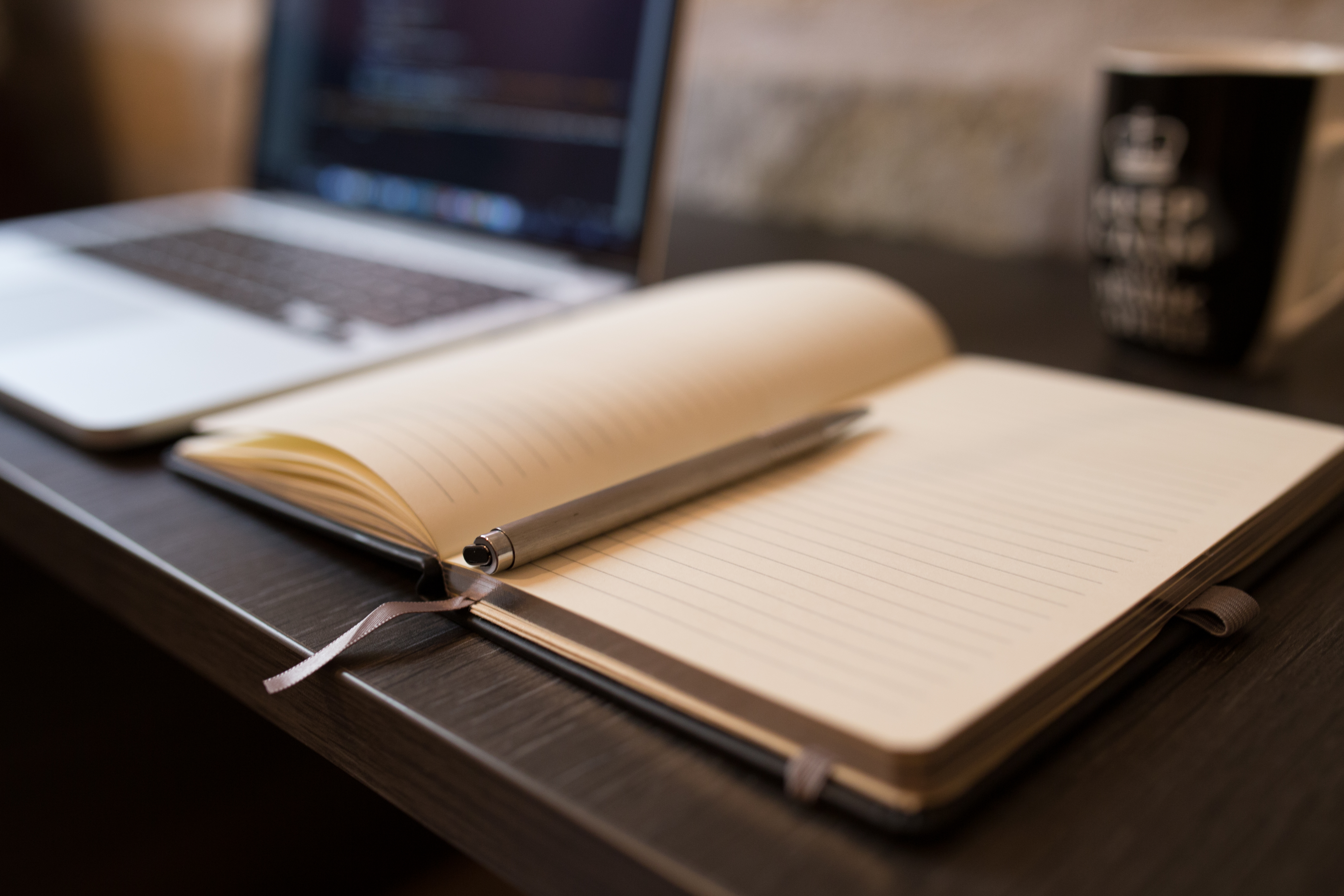 The Sound of Nouns

The adjectives are the first to go. Pretty. Lovely. Sad. Angry. Then verbs. Walk. Talk. Breathe. Later adverbs. Eventually your hearing is whittled down to strict nouns, not even pronouns. He and she and I dissipate into the noise of the world.

When you begin to lose your hearing, you think this is not happening and could you please just speak louder. You turn up the volume on the TV. You blame headphones and loud concerts in your twenties. You are accused of being aloof, snobby. You feel like you’re slowly going crazy. Alone.

Not alone, with your wife, you visit the doctor. The doctor scribbles presents with aphasia. You ask what that is and all you hear is stroke. Your wife kneels at the doctor’s feet, leaving you with your naked, knobby knees hanging off the table. She is crying, but you don’t hear it.

You are a writer and your recent novel has been acclaimed by the critics, but you’ve received over one hundred e-mails and handwritten letters from people who are angry. Sheila, your protagonist, was initially a man’s vision of female perfection. Indeed, that was your intent, but it seemed one-note. So you changed course and made her the victim of vile domestic abuse at the hands of her husband, which led to life in a motel, which led to a gig as a stripper, which led to prostitution, and you felt you were being honest and empathetic. Sheila’s attorney ex-husband continued to go to ball games and islands and had great white teeth you could see at a distance. In the end, Sheila killed herself. You thought it was poetic.

Your daughter is a college sophomore and you yearn to tell her about the one in five sexual assault statistics you read about in your research. You are terrified for her. She wrote you a letter, too, citing things she learned in her women’s studies class and how you’re perpetuating the weak female stereotype. I fucking hate your book, she told you in bold, underlined italics. You try to talk to her, but you can’t speak on the phone. When you tried, you only heard every third or fourth word and so conversation was stilted. Also, she is several states away. Your new loss is greater than that distance.

The next week you have IVs inserted, dyes pushed through your veins. You have a scan. Then another. They find nothing alarming. You only know this because they write it down in barely legible handwriting on personalized notepads. Your daughter flies in from her small college town. She and your wife have covert conversations: after dark, in the kitchen and hallways. The doctors start to mention mental illness. A psychiatrist’s name and number is handed to you. Your wife looks at you as if you are a child faking illness to get out of school. She goes back to work, from which she has taken a short leave of absence. Your daughter goes back to school.

You are working on your third novel in your basement with a drop ceiling and twitchy fluorescent lighting. You don’t answer the phone or the door. You keep writing. It is true with the selective hearing that your writing has gotten more succinct, less space for flowery and hollow prose. Less meandering, more precise. You write about a world solely filled with women. It’s rather incredible and might be a place you’d like to visit, but you know you’re not the expert. You add in a few men. They are rattling vessels made up of spare parts of yourself. You set the story aside with a click of the X and go upstairs to make dinner for your wife.

In the kitchen, you prepare a beef stew. The house fills with the smell of bay leaves. When she gets home, your wife says vegetarian and years. She doesn’t eat the stew and instead cuts cubes of cheese; they are perfect one inch squares. You let the succulent meat melt between your teeth. It will taste better tomorrow. She says therapy.

The psychiatrist’s office is in a shopping mall with a one-way mirror window looking out into the main corridor of the mall. It is such a strange diorama to survey a mall, the most public of places, while you divulge your most private of secrets. It is disconcerting, but you are fascinated and take mental notes to use for your stories.

As you expected, the meeting is challenging. After the psychiatrist says couch, seat, hearing, you both come to the understanding that writing out the conversation is the best approach. Having not written anything by hand in a while, your fingers grow tired quickly. Next time, you tell yourself, you’ll bring the laptop.

I know Dr. Moreland thinks it may be psychosomatic, the therapist writes. He offers you the pen. It is like an accusation. The utensil is a Montblanc –thick, expensive. You don’t take it. What do you think, he scratches. The letters are jagged and he leaves out the question mark, as if he doesn’t expect you to answer. You wonder what these two things say about the doctor. He offers the pen again. You reach down to your bag and pull out your Bic with the chewed end.

I wouldn’t invent this, you write.

You’re a writer, I know. Could this be some kind of writer’s block?

Tell me about your childhood.

What follows is a silence bloated with expectation. You get up from the couch and look out into the mall. Two boys, maybe eighteen, sit in giant leather massaging chairs. One is on his cell phone. The other keeps swinging his head to follow nearly every woman as she passes by. Behind the boys is a clothing store. Two women at least ten feet tall peer out from the advertisement. Jeggings! It shouts. A few orange maple leaves are scattered in the window display. The women’s backsides are shown, their faces looking back at you in a coy, come-hither look. Flattering favorites for every fall look! They cry out.

Your daughter wears jeggings. You once scolded her for wearing them, saying you could see everything you shouldn’t in such tight pants. They would just bring you negative attention, you told her. She asked you to be more specific. You let it drop.

Boyfriend. Class. Professor. Econ. This was the gist of your most recent conversation with your daughter. You said a stumbling good-bye and handed the phone back to your wife. You cried. She was the real reason you were in the psychiatrist’s office down a narrow hallway in a suburban shopping mall.

The psychiatrist is nudging you with the pad of paper. You turn around, but don’t take it. You read how do you feel about medication? I think I know something that may help.

You shake your head and say out loud, not on paper, thank you for the visit and leave his sanctum. Out through the waiting room, past the Matisse print you know is called Blue Nude. You feel your heels click on the shiny mall floor. You feel traction under your shoe. You have stepped in gum. Other dark blotches on the floor appear to be gum of past teenagers. This affects you in a way you couldn’t have predicted. In the buzzy silence of the mall, you crouch down and try to get nearer to the gum that has captured you. Not close enough. You sink to your knees and allow your chest to graze the floor.

You look up. Two security guards are headed in your direction.

You get close to the pad of gum. You long to smell it. If you get close enough, can you smell the flavor? You scrape at it with your fingernail and it comes up easily; it is bright purple under the dirt black. Grape, like children’s cough medicine. The security guards are reaching for your arms. They lift you. You can see they are asking if you need help, but you can’t hear it. You nod to them and carry on through the mall.

Your writing suffers. At first it’s some minor connection issues. Nothing a little studied wordsmithing won’t help. Then it begins to announce itself, despite your best efforts to keep to the plan you had laid out. Initially your female characters are the first to exhibit symptoms. They begin saying things that you would have normally attributed to your men. Delete. Delete. Delete. But when you retype, you end up typing the same thing. You close your laptop. You open it. The dialog is still there. You close your laptop. You feel remnants of gum on your fingers. You realize that “suffer” is the wrong word. You open your laptop. You change your plot and characters altogether. You email your editor, who writes back immediately. He isn’t pleased. You don’t care.

You find your wife at the kitchen sink, hug her from behind, your hands encircling her waist. You rest your head between her shoulder blades, say you’re sorry.

Your hearing situation does not improve. You still can’t hear much of what’s being said. But it doesn’t matter. You make do. You cook lentils and beans for your wife. You e-mail your daughter links to more statistics. She writes back: I know dad and tells you she is majoring in women’s studies. She writes that she is minoring in creative writing. Your heart skips. You tell her the new plotline of your next book. She says it sounds promising and does not use bold underlined italics.

In your selective hearing, you realize, there is no ownership. There is no selfishness; no I. No judgment. That woman is not fat, nor skinny, beautiful, nor ugly. That man is not sexy, hairy, scary. Your entire plot has changed. And you’ve decided that it’s not a bad world to live in: where he is just a boy and she a girl, a man and a woman and they don’t always do the things you expect them to.

Jennifer Fliss is a Seattle-based fiction and essay writer. Her work has appeared or is forthcoming with PANK, The Rumpus, The Citron Review, Necessary Fiction, and elsewhere. She can be found on Twitter at @JFlissCreative or via her website, jenniferflisscreative.com.