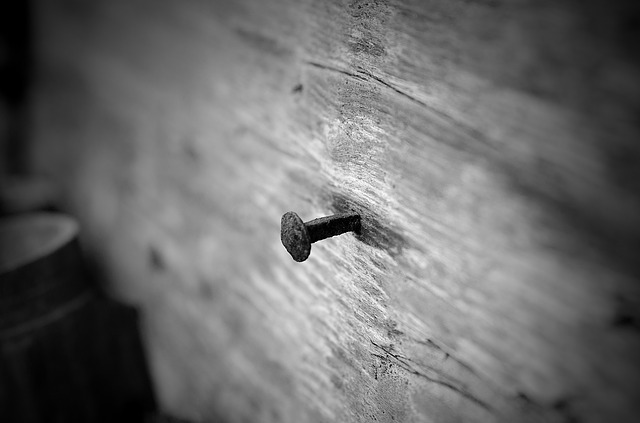 The spirit in the wall shrieks when I try to hang a photograph of a ship. He cries like an angry cat until I free the nail from the plaster. Spirit blood drips from the hole, but since it’s invisible, I can’t see a thing. “I didn’t know you were there,” I say, and this is true. The spirit moves like a mouse in the walls; I’m never sure where he is at any given moment. I also don’t know if he’s male, but the noises usually come from up high, like from a tall person, so Sally and I settled on the male pronoun. We may be wrong. He could be female, or non-binary. Anything is possible, really, once you realize you live with a ghost.

He was here when we bought the place a couple years ago, let us know he existed by making the wall all rubbery. Just like in a horror movie, with hand shapes stretching out toward us to wave hello. That was enough to scare us into a motel room for a week, during which time I went looking for our realtor, who never mentioned anything about spirits when we signed paperwork, but she’d vanished, along with her office. Poof. And after the week away, we couldn’t afford to pay for a second home. There was a mortgage to cover. Plus, all our stuff was under that one roof. So back we went. Cautiously, of course.

We gave every deterrent a shot—priests, ghost hunters, demonologists. You name it, we tried it. The spirit refused to go. You’d think he’d want to find an escape, but he’s stubborn. I admit I used to wonder if the spirit watched me when I showered or changed my clothes, as if I’m a desirable erotic object. Sally dressed in the dark, even though I’m sure spirits can see in any lighting condition. Then there was the uneasiness when Sally and I had sex. Having a baby was the next step after we bought the house, but we’d pull the covers over our entire bodies and fumble. Neither of us could orgasm, either. We were too concerned the spirit was keeping an eye on us, judging our technique.

Our interactions with the spirit lately have been minor, but the fact that’s he’s still here is enough to make life taxing. A scratch from behind the plaster. A moan. He doesn’t poke stuff off shelves anymore, which is a plus. Still, we’re always anxious, and it’s hard to work on a marriage and try to start a family when you’re additionally acting as an amateur exorcist. Sally says I’m preoccupied, but I don’t agree; I want a solution. Anyway, I assume the spirit knows that Sally is currently living with her sister, but I also always assumed spirits could move through anything, especially walls, so this entire ordeal has been a learning experience concerning my spectral prejudices.

I’ll tell you the truth, though: I wish the spirit could talk. Then he might tell me where he was headed when our house got in the way. In all of our research, we never came across any stories of deaths in our home, natural or suspicious, so Sally and I figured this dead person got lost somehow on his way to heaven or hell and ended up here. Something snagged him and now he’s trapped in the insulation. I can’t imagine a life (afterlife, I guess) like that. Isn’t another spirit waiting for him somewhere?

Here’s something I started to do recently, out of desperation: Whenever I come across one, I tell stories to the walls about people who overcame obstacles to complete their journeys, hoping the perseverance of their narratives rubs off on the spirit. When I played shortstop in high school, Coach Fox used to call me into his office to tell me of ballplayers battling the yips or long hitting slumps. Hearing about guys making it back inspired me, and it kept me on my game enough to play college ball on scholarship. Some days, I recount these stories for the spirit. Other times, I cobble together narratives from movies I watched as a kid. Sally thinks I’m nuts, said once that I cared more about the spirit than I did her, than I cared about trying to have a kid, but I think the process is working.

One story that I’ve told more than once to the walls comes from my pop-pop, who was a sailor in WWII. A typhoon hit his fleet in the Pacific and killed hundreds of men. The way he told it, his ship was retrofitted to carry planes, and it was part of a fleet that took out Japanese boats and aircrafts. But when this typhoon arrived, Pop-Pop said it was like the whole world got shook up in a snow globe. He worked on the hangar deck, in the belly of the beast, and planes broke loose left and right, crashed into each other. The ship rolled in the weather and my pop-pop said, stuck there, with no view of the outside, you could stand on the walls. Boiler rooms were evacuated and Pop-Pop, all twenty years of him, fought through the smoke and fire until he reached safety. By the time the storm ended, three ships from the fleet were at the bottom of the ocean. Almost eight hundred men drowned. Pop-Pop lost three of his pals, but he lived.

Imagine, I say to the spirit, being twenty and thinking your journey was about to end. Imagine getting a second chance to live and continue your family line. Imagine having the wherewithal to keep going, after you’ve asked why you were spared and your pals weren’t?

I tell my pop-pop’s story because sometimes I feel like I’m drowning, myself. In responsibility. In adulthood. Like Sally and I were on our way somewhere when our own typhoon hit, and I’m still trying to get to the top deck. This is our first house. We’re supposed to be moving forward. Having kids. Isn’t that what happiness is all about? So we can’t have this spirit mucking it up, and I want Pop-Pop’s story to be the spark that purifies my home. In fact, the nail that punctured the spirit, the photograph I’m trying to hang today, is of Pop-Pop’s ship, The Monterey, looking majestic as it cuts through black-and-white waters. I gave it to him as a Christmas present years back, and when he opened it, I watched him cry. After he died, while cleaning out his house, I took the photograph with me to hang. That was two months ago, because Sally hadn’t yet packed her things. Or maybe she had. Not much is certain anymore.

Last night, I dreamt about burning the house down to end all of this nonsense, start fresh, and in the dream, the spirit was so grateful for letting him out, he rebuilt the house using some kind of ghost magic. Not that I believe in magic. Spirits are enough of a stretch.

At this point, though, I’m desperate. I’ll consider magic if it works.

“Maybe I’ll stab you again,” I say to the wall right now as I hold the hammer and nail. “I’ll stab you until you can’t stand it anymore. I’ll stab this wall until it crumbles and you can’t hold onto anything. Until you’re exposed and have to face what’s waiting for you.”

Benjamin Woodard is editor-in-chief at Atlas and Alice. He lives in Connecticut with his wife and teaches English. His stories have appeared in Hobart, jmww, Atticus Review, and other journals. Three of his short essays appear in the recently released anthology, Miscellany, from Run Amok Books. Find him at benjaminjwoodard.com or on Twitter at @woodardwriter.